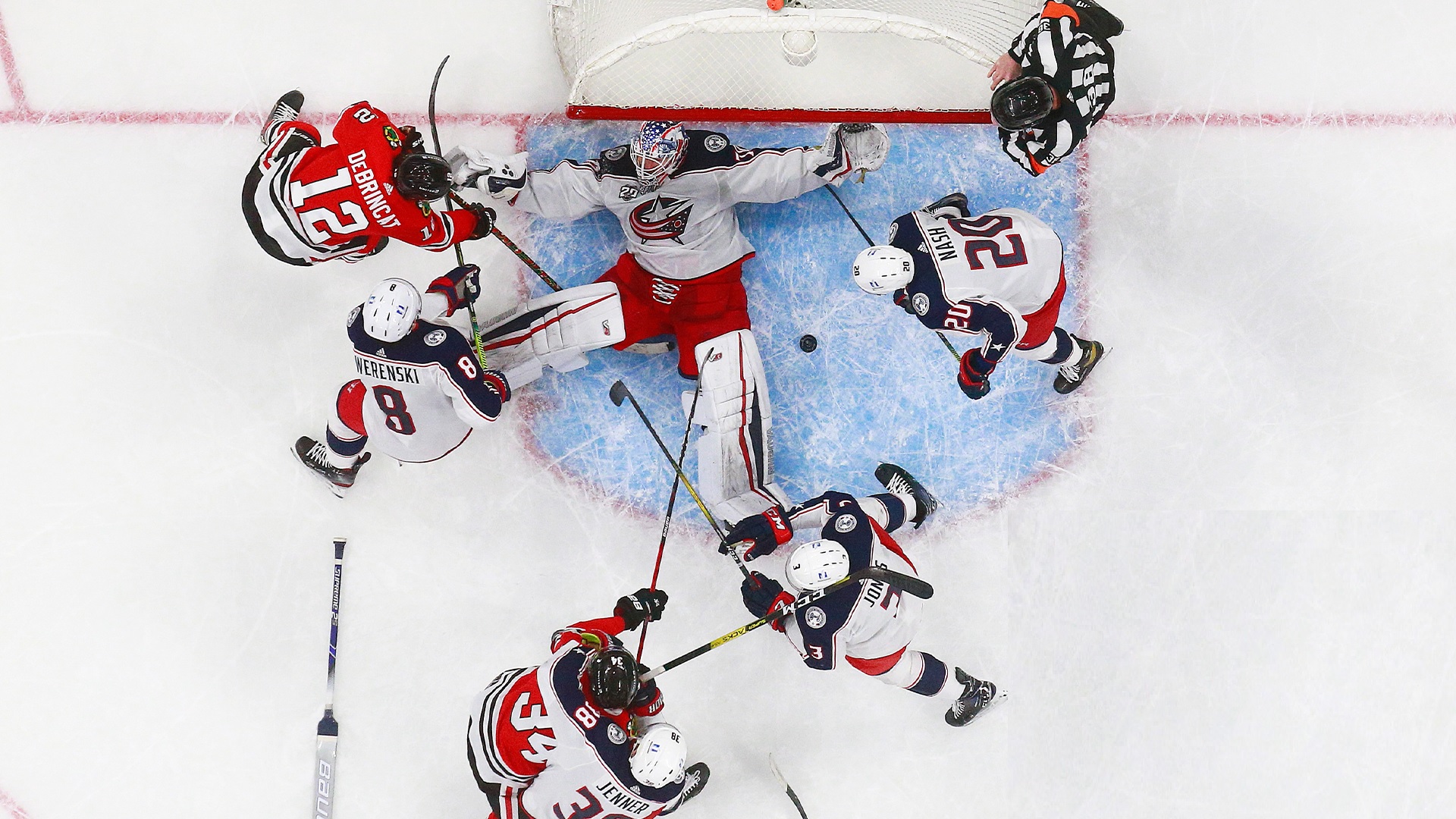 After losing a shootout on Thursday night the Blackhawks made a minor adjustment to their lineup.

Kevin Lankinen was back between the pipes but Reese Johnson was in the lineup for Madison Bowey, giving the Hawks a normal 12 forward, six defensemen lineup.

The Blackhawks announced before the game that defenseman Connor Murphy was headed to the IR, however. Andrew Shaw was still missing from the lineup as he deals with concussion issues. With Murphy on IR, Alex DeBrincat had an A on his shoulder for the night.

Patrik Laine got Columbus on the board at 6:39 into the first with a wicked shot that was past Lankinen before he could react.

The Hawks got the first power play of the game at 11:42 when David Savard went to the box. Joonas Korpisalo was playing extremely well in net for the Jackets and Chicago’s first advantage came up empty.

At 15:06 into the first, Brandon Hagel trucked Jack Roslovic and Laine didn’t like it. So he ran Hagel. The two exchanged words and then dropped the gloves.

Laine took the extra penalty for initiating the fight, giving the Hawks their second power play of the opening period. The passing was good but Columbus took away most of the lanes to get the puck on net. Another two minute advantage expired without a score.

Columbus got a power play late in the period when Nikita Zadorov went to the box. The Jackets would have 33 seconds of advantage that carried over to the second period.

At the end of the first period, Johnson had three hits in four shifts and showed the same good energy he had earlier in the season when he had a chance to skate with the NHL team.

The Blackhawks out-shot the Jackets 14-9 in the opening 20 minutes but Columbus had a one-goal lead heading to the second.

Chicago handled the remainder of the power play and continued putting pressure on the Jackets. That pressure finally paid off when rookie defenseman Nicolas Beaudin jumped into the play once again and rifled home his second career NHL goal.

Patrick Kane picked up the only assist on Beaudin’s goal.

With about nine minutes left in the second, a long pass attempt caught Mattias Janmark in the head. He went down hard but was right in front of the Hawks’ bench. He was able to get to the bench on his own and went to the room for a quick evaluation.

Janmark returned to the bench four minutes later but he was there just in time to watch Columbus take the lead back. Cam Atkinson parked himself in front and was able to redirect a shot down and past Lankinen for the Jackets’ second goal of the night with 5:13 remaining in the period.

Neither side would take another penalty or score in the second. After 40 minutes the Blackhawks had a 26-19 shot advantage but were chasing one on the scoreboard.

Johnson had a team-high five hits and added one blocked shot and one shot on net in eight shifts over the first two periods.

Down one, the Blackhawks were only able to get one shot on net in the first 14 minutes of the third period. The skating was fast; the action was up and down the ice but the Hawks simply weren’t generating chances. Their second shot on net of the period came with 5:30 left in regulation.

Inside the final four minutes of regulation the Hawks were able to get the game even. Philipp Kurashev poked a puck loose and Carl Soderberg scored his first goal with the Blackhawks.

The Blackhawks were out-shot 12-4 in the third period but scored the only goal of the period.

When regulation came to a close with the score tied it marked the seventh time in 16 games that the Blackhawks were headed to overtime. However, it was the first time the Hawks forced overtime after trailing entering the third period.

Mitchell was at 19:22 at the end of regulation with one shot on net and one hit. Beaudin had skated 15:42 with one blocked shot, one hit and his second goal of the season.

Lankinen made 29 saves in regulation.

On the first shift of overtime, Kane and DeBrincat perfectly executed a give-and-go and it was DeBrincat tipping the puck into the net for the game-winning goal.

Kane was credited with the helper on the GWG.

Soderberg won 12 of 15 faceoffs with the late tying goal. He led a solid effort at the dot; Chicago won 65 percent of the faceoffs on Saturday night.

Kane’s two assists in the game give him 15 helpers and 22 points on the season. Both of those marks are the best for any player on a team residing in the United States.

Last year it took DeBrincat 30 games to reach eight goals scored; he scored in games 28, 29 and 30 to reach eight. This year he’s at eight goals in 16 total Blackhawks games, but he’s appeared in 12 because he missed time in COVID protocol.