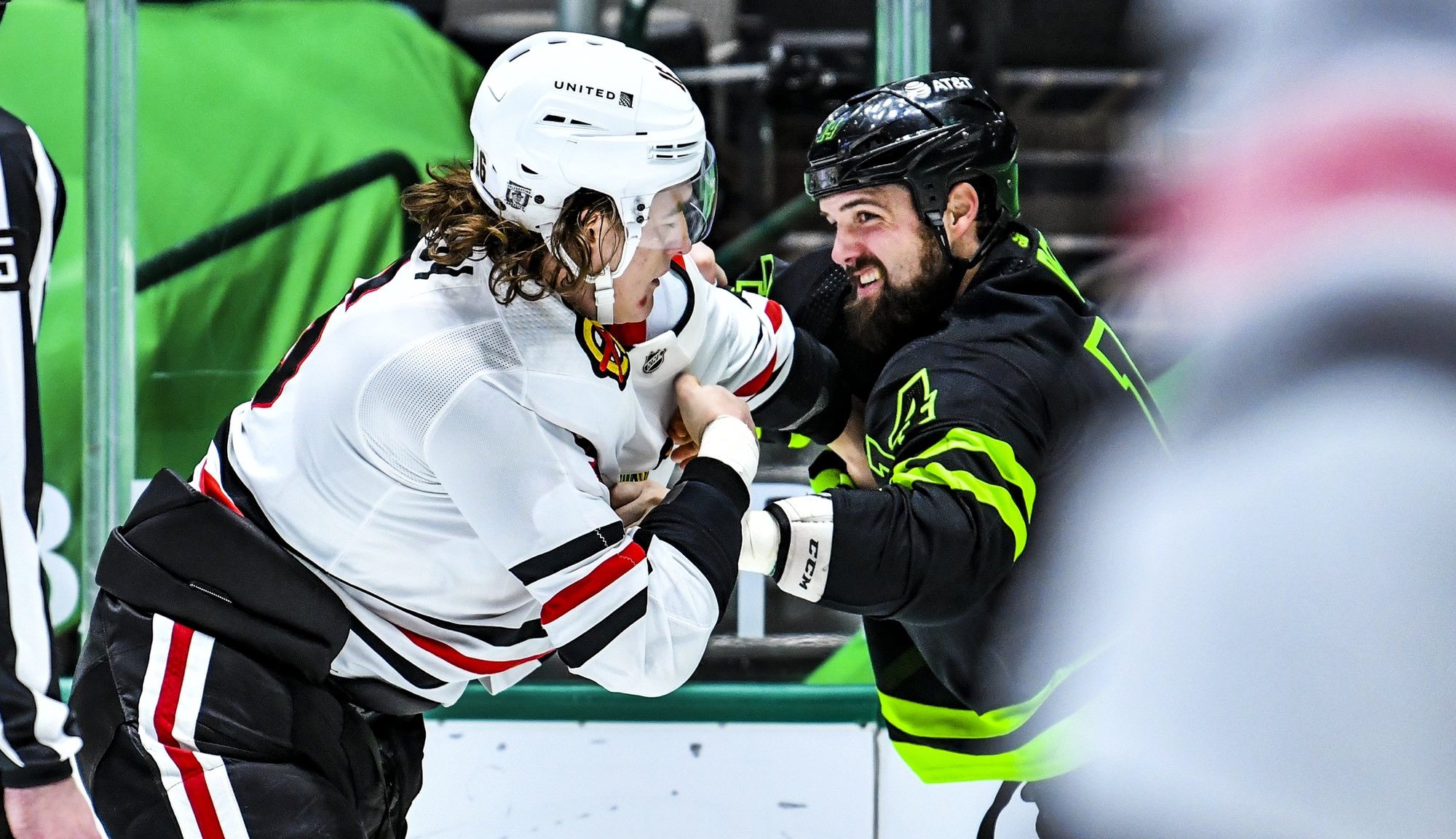 The Blackhawks traveled to Dallas on Sunday for a mid-afternoon game against the Stars in their Blade Runner alternate jerseys.

Dallas has scored at will so far this season since coming back from COVID Protocol delaying the start of their year. The Hawks came in with a power play that was performing as well as any in the league.

The Stars had a few issues to work out over the weekend, however. Anton Khudobin missed Sunday’s game because of an undisclosed “internal issue.” So the Hawks got a good look at rookie Jake Oettinger.

Chicago came out and controlled the puck early. The Hawks were credited with six of the first seven shots on net in the game and finished the first period out-shooting the Stars 11-9.

Malcolm Subban got the start for Chicago and looked solid in the first period. The Blackhawks failed to score on two power plays but killed one Dallas advantage in the first. The Stars had 1:58 of power play time carry over to start the second.

Subban continued to play sharp in the second period and Chicago’s defense gave him some help.

Three minutes into the second, Nikita Zadorov dropped the gloves with Jamie Benn and took a couple hard shots to the head. The two served their five minutes and remained in the game.

When Dallas’ Justin Dowling went to the box at 11:18 into the second, the Blackhawks got another power play. This time they made it count.

Alex DeBrincat continued his marvelous start to the season on the power play, tapping in the gorgeous feed from Dylan Strome for his fifth goal of the season. Patrick Kane picked up the second assist.

Subban made a few huge saves in the final four minutes of the period and the Hawks went to the room with a one-goal lead after 40 minutes. The Stars out-shot the Hawks 13-10 in the second but Subban was up to the task.

The stories early in the third period continued to be the Hawks controlling the puck and Subban making big saves.

Unfortunately, Mattias Janmark went to the box at 7:26 to give Dallas a much-needed power play. Benn got one good shot off but the Blackhawks’ penalty kill unit continued a terrific afternoon.

But as the penalty was ended, a high shot hit Subban in the glove but he failed to control it. Traffic in front ended with the loose puck bouncing into the cage behind Subban. Jason Robertson, who was engaged with Connor Murphy in front of the net, was credited with the goal.

After almost 50 terrific minutes, a shot Subban needed to keep popped out and the game was tied.

With 5:40 left in regulation, the Blackhawks got another power play opportunity. Chicago couldn’t convert and the game remained tied.

Chicago got more good zone time in the final minutes but couldn’t convert and the game headed to overtime.

The Blackhawks had a 32-29 shot advantage after 60 minutes and had blocked 15 shots. With the exception of the one goal, Subban was good. The offense controlled the puck but couldn’t finish.

Dominik Kubalik skated only 12:46 in regulatoin but his limited ice time was warranted. He was not good when you noticed him – and that was rare.

Chicago got Kane and DeBrincat on the ice together late in overtime and they ended the game. Kane dropped a gorgeous pass on the stick of DeBrincat and he sniped home the game-winner with 2:04 left in the extra session.