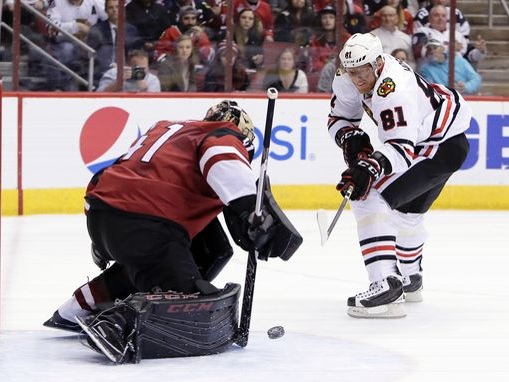 After struggling to score in their first game after the All-Star Break, the Blackhawks faced an All-Star goaltender for the second time in as many games.

So of course this visit to the desert would turn into a track meet.

Aided by two power plays, the Blackhawks out-shot the Coyotes 14-6 in the first period. With Alex Goligoski in the box, Patrick Kane got the party started.

Kane’s 16th of the year came 15 seconds into the Goligoski penalty with assists going to Jonathan Toews and Duncan Keith.

The significant news on Hartman’s 11th goal of the season wasn’t that Keith picked up his second assist of the night, or that Hartman made a terrific play.

Andrew Desjardins was credited with an assist on the play, giving him a point… this season.

Chicago got a second power play in the first period when Michael Stone went to the box, and this time it was Marian Hossa’s turn to do damage.

Desjardins celebrated his first point of the season by fighting Luke Schenn later in the period, a fight that saw Schenn pick up the extra 10 minutes of penalty time. When the first period ended, the Blackhawks held a 3-0 lead and had played one of their better 20 minute stretches of the 2016-17 season.

But nothing can ever be easy, and the second period provided some drama for the Hawks.

Arizona flipped the script on the Hawks in the second, out-shooting Chicago by the same 14-6 tally the Hawks enjoyed in the first period.

Toews and Artem Anisimov went to the penalty box 10 and 19 seconds into the second period, respectively, and the Coyotes made the Hawks pay. Oliver Ekman-Larsson scored on the two-man advantage to cut the lead to 3-1 only 96 seconds into the middle frame.

Artemi Panarin scored his 18th of the season at 5:24 to push the lead back to three.

After the Panarin goal, it was all Arizona. Christian Dvorak scored at 14:24 and Brendan Perlini beat Corey Crawford 87 seconds later and suddenly a blowout had turned into a one-goal contest.

Through the first 40 minutes, Crawford had stopped 17 of 20. Mike Smith saved 16 of 20. So much for the match-up of All-Star netminders.

Seven minutes into the third, with Desjardins in the box (again), Toews had the best early scoring chance of the period while short-handed.

Arizona put a good push on the Hawks in the middle stages of the third but the defense in front of Crawford did a good job of deflecting and clearing pucks.

The Hawks maintained a 4-3 lead in the final minutes and Smith went to the bench for the extra attacker with 84 seconds left in regulation. Arizona wasn’t able to generate a good scoring chance with Smith on the bench and the Blackhawks held on to win.

Keith had two assists in 29:28 on the ice to lead Chicago. Kane and Panarin had one goal and one assist each, and Kane was credited with a team-leading five shots on net. Hartman put four shots on net in only 6:51.

Hossa was credited with the only takeaway for Chicago on Thursday night, while Niklas Hjalmarsson blocked a team-high five shots. Crawford stopped all seven shots he faced in the third period to finish the win with an .889 save percentage (24 of 27 saved).

14 thoughts on “Desjardins, Blackhawks Hang On In Arizona”