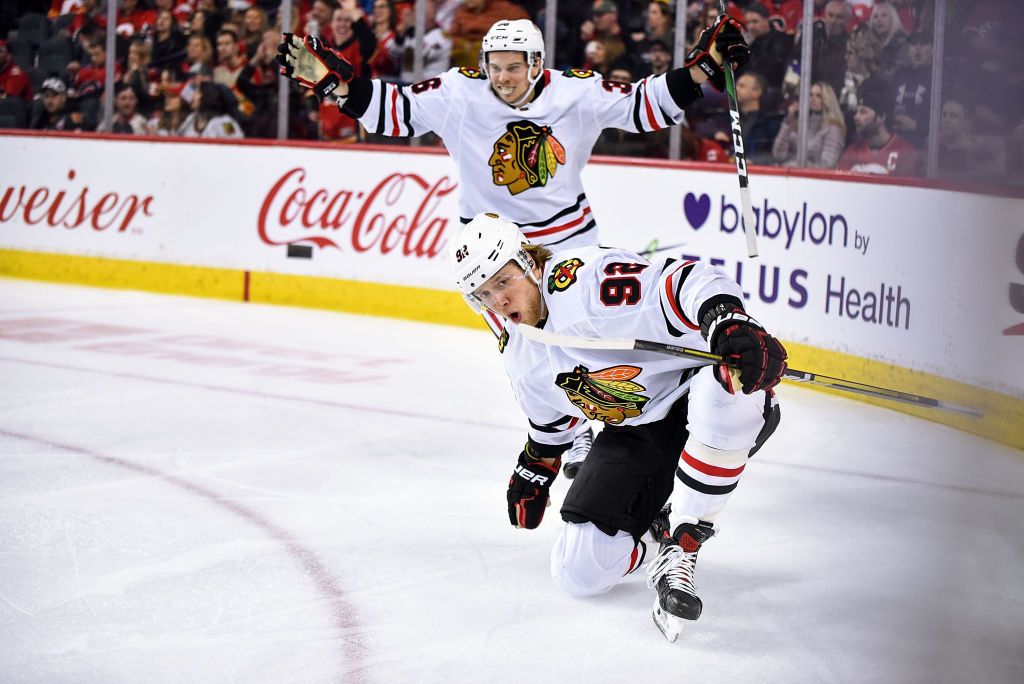 The Blackhawks came into Saturday night’s game losers of their last five straight and six of their last seven. Chicago had been outscored 18-8 during the five-game losing steam and could not improve their position in last place in the Central Division with a win in Calgary.

Calgary, on the other hand, came in tied with Vegas for third in the Pacific Division. Winners of only four of their last ten, the Flames have been sliding the wrong direction and dealing with injuries much like the Blackhawks.

Chicago put 49 shots on net in their last game but found a way to get shutout. Could they get on the board in Calgary?

The answer was yes – and they did it frequently.

Jonathan Toews started the night with his 16th of the season on the game’s first shift. The Blackhawks captain scored 30 seconds into the game to give Chicago the lead.

Slater Koekkoek got the puck to Toews in space and the captain handled the rest.

Calgary tied the game 97 seconds later on Sam Bennett’s sixth of the season.

Chicago got a power play with Sean Monahan in the box at 7:12 into the first. The Blackhawks couldn’t convert on the advantage but Toews found Dominik Kubalik to get the lead back five seconds after the power play ended.

Patrick Kane picked up the second assist on Kubalik’s 23rd of the season.

Of course the Blackhawks aren’t allowed to have nice things. Bennett tied the game again, this time at almost 13 minutes into the game. Dillon Dube was credited with an assist on both of Calgary’s goals.

At the end of the first period, Chicago had out-shot the Flames 12-8 but both teams had two goals on the board. The Hawks were able to score, but couldn’t stop the puck from getting through the defense. Rookie defenseman Adam Boqvist had a tough first period.

This was not one of those nights.

Brandon Saad patiently scored his 18th of the season off a nice pass from Kane at 4:24 into the second to get the lead again.

The Blackhawks were able to extend the lead 64 second later when Alex Nylander made one of those plays that make people crazy.

Nylander’s seventh of the season showed off how terrific Nylander’s hands can be. Seeing that consistently is where his game is so frustrating.

The fourth goal of the night was it for David Rittich, who made 11 saves against 15 shots in 25:23. Cam Talbot entered the game, hoping to provide some stability in the blue paint and get a boost from the skaters in front of him.

Elias Lindholm cut Chicago’s lead to one at 10:56 and the Blackhawks weren’t putting many shot on net since Talbot took over. The game stayed 4-3 for for almost seven minutes until Alex DeBrincat finally got on the board.

Dylan Strome and Kirby Dach picked up the assists on DeBrincat’s 14th of the season and all four lines had now scored for the Blackhawks.

A strong effort from Matthew Highmore was rewarded with an assist on Nylander’s second of the night just 27 seconds after the DeBrincat goal and Chicago now had a three-goal lead.

Calgary out-shot the Blackhawks 14-7 in the second period but Chicago scored four times to take a 6-3 lead to the final period.

Kane, Kubalik, Toews and Nylander had two points each after 40 minutes of hockey. David Kampf, Drake Cagguila and Ryan Carpenter were the only Chicago forwards without a point through two periods.

Neither team pushed the tempo very much in the first half of the third period. Dach went to the box for tripping at 6:21 but Andrew Mangiapane killed the Flames penalty when he hooked Carpenter 93 seconds later. Neither team did anything while they had an advantage.

With Olli Maatta in the box, Lindholm scored his 27th of the season at 14:06 to cut Chicago’s lead to two.

With under four minutes left in regulation a scramble broke out around the Blackhawks net. Robin Lehner was able to deny Johnny Gaudreau but as the puck made its way up the ice in the possession of Toews, Cagguila and Gaudreau got mixed up behind the play.

Somehow the officials sent Cagguila and Lindholm – not Gaudreau – to the box with 3:26 left in regulation. Kane scored into the empty net as Talbot was making his way to the bench 16 seconds into the 4-on-4 action to give the Blackhawks a 7-4 lead.

Toews was credited with the assist on Kane’s empty net goal, giving both players a three-point evening.

Dach scored with Talbot in the net to make the final score 8-4. Lehner made 38 saves against 42 shots – 20 of which came in the third period – earn the victory.

Cagguila picked up an assist on Dach’s goal, meaning only two Chicago forwards finished the night without a point.

Chicago scored eight goals on 28 shots after getting shutout with 49 shots on net in their previous game.

Toews won 10 of 12 faceoffs in the first two periods with his two points. He finished his three-point night winning 13 of 18 faceoffs and led Chicago with three takeaways in a great effort.

Dach ended a three-game pointles drought. He has eight points in his last nine games, however.

Saad now has five goals in seven games in the month of February and has scored in three of his last four games.

DeBrincat’s goal was only his fourth in 17 games since the calendar rolled over to 2020.

Nylander and Saad led the Hawks with four shots on net each. Every Blackhawks forward put at least one shot on net; Boqvist and Maatta were the only Chicago skaters who failed to be credited with a shot.

Koekkoek had a good night. He led the Hawks with three blocked shots and was plus-three with an assist in 21:13. He was also credited with one hit and one takeaway.