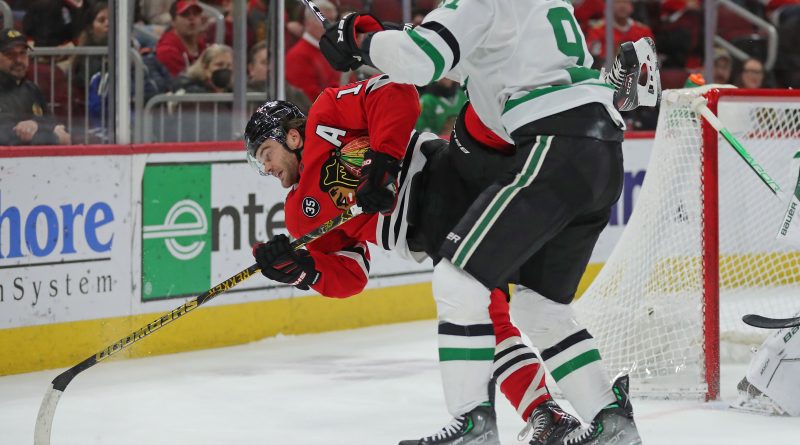 Fans at the United Center got to see a potential playoff team from Dallas play against the Blackhawks on Sunday night.

Head coach Derek King decided to throw his lines in a blender before the game. Most notably, he put the Erie Otters trio back on a line together and put Patrick Kane and Jonathan Toews on the same line. Lukas Reichel was on the wing of the third line with Kirby Dach as his center and Sam Lafferty on the other side. Because why not?

Four goals were scored in the first period, and all four were scored by a member of the Stars. Unfortunately for them, the score was tied at two after 20 minutes.

Jamie Benn scored a power play goal at 4:14 to give Dallas a lead. Less than four minutes later, Philipp Kurashev attacked and had Toews coming with him. Kurashev should have shot the puck; this was exactly the kind of play King was talking about when he said the team needs to be more selfish. But Kurashev opted to try to pass to Toews. Somehow it ended up with Kurashev getting credited for the goal.

Three minutes with Chicago on the power play, Toews shot a puck that went off Esa Lindell — who was the unfortunate scorer of Kurashev’s goal. Once again, Lindell scored on behalf of a Blackhawks skater.

The Blackhawks out-shot the Stars 13-10 in the first, but neither of their goals came on what would have been credited as a shot on net. Thanks, Esa!

Boris Katchouk scored his first goal with the Blackhawks to tie the game at three.

That was it for the Chicago offense in the second; Dallas, on the other hand, would get two goals from Jason Robertson before the period would end.

Dallas took a 5-3 lead to the room. On paper, the Blackhawks had a 25-20 advantage in shots on net but the play was clearly favoring the Stars. Kevin Lankinen was fighting it and his skaters weren’t doing much to help him.

Lankinen’s play was far from inspiring, so King decided the third period wouldn’t be his problem. Collin Delia replaced him in net to begin the third period. Lankinen’s night came to an end after allowing five goals on 20 shots for a terrible save percentage. If the final couple weeks of the season is a tryout for next year — and, for some, the next contract — Sunday night wasn’t a good night for Kevin Lankinen.

Tyler Seguin somehow scored a wrap-around goal with 4:35 left to extend the Stars’ lead to three. It wasn’t a good goal for Delia to give up, but thus is life.

Dach scored with 2:57 left in regulation, reminding us that good things can happen when you shoot the puck.

For the third time in the last month, the Hawks allowed six goals in a game. That’s very, very rarely going to be a winning formula. And in this one, four goals wasn’t enough from the offense. And the Blackhawks took a seventh consecutive loss.

Alex Vlasic started the night with Seth Jones but, once again, was held to the lowest ice time on the blue line (14:55). Again, what is the point of skating Erik Gustafsson almost 20 minutes and Vlasic less than 15 if one of the two should be here next year? Afraid he might be exposed or make a mistake? What he hell have we been watching from the rest of the defensemen all year?