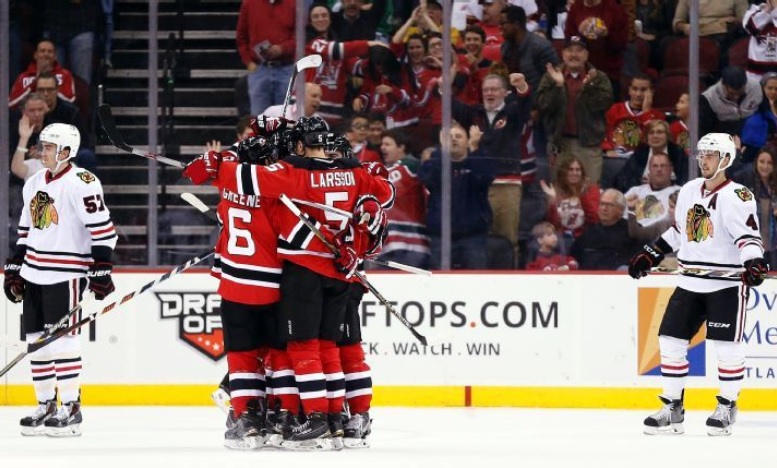 For a couple weeks, we were led to believe the Blackhawks might be able to stay afloat while Duncan Keith was out of the lineup.

But removing Marian Hossa from the mix as well has proven to be catastrophic, and the Blackhawks were left desperately seeking answers after another ugly loss on Friday night.

In the wake of being out-scored 4-0 over the final two periods and overtime against the Blues, the Hawks came out and gave up three in the opening 20 minutes in New Jersey. The ugly start dug a hole that proved to be too deep for the Hawks to overcome, and Chicago lost on the road.

Making matters worse, Artem Anisimov somehow managed to be minus-three in only 7:34 and did not return for the third period with what the team is calling another lower-body injury.

Thankfully, Jonathan Toews didn’t get hurt when he decided to drop the mitts for the first time since fighting Joe Thornton in 2013.

Toews’ fight was the only thing the Hawks won on Friday night.

Corey Crawford allowed three goals against 13 shots in the first period and was removed after 20 minutes. Scott Darling allowed a goal to Mike Cammalleri 7:28 into the second period but did a nice job the rest of the way. He was pulled for the extra skater with 6:42 left in regulation, an uncharacteristically desperate move by coach Joel Quenneville.

Patrick Kane scored his ninth of the season in the second and got double-shifted for most of the night, but the Hawks’ bottom six forwards continue to bring nothing to the table offensively.

Erik Gustafsson was one bright spot on the blue line, showing an ability to jump into the rush and put some offensive pressure on the Devils. Gustafsson put four shots on net in 19:45, a total only eclipsed by Patrick Kane (five).

Tanner Kero added his first NHL goal with Darling on the bench. Unfortunately, there were only 86 seconds left in regulation when Kero lit the lamp.

Toews won 18 of 29 faceoffs but failed to register a shot on net in the loss. He was credited with three hits in 22:04, however.

Niklas Hjalmarsson played one of his worst games in recent memory, giving the puck away on the opening goal. He was on the ice for all four New Jersey goals.

The Hawks return home to face a Connor McDavid-less Oilers squad on Sunday.