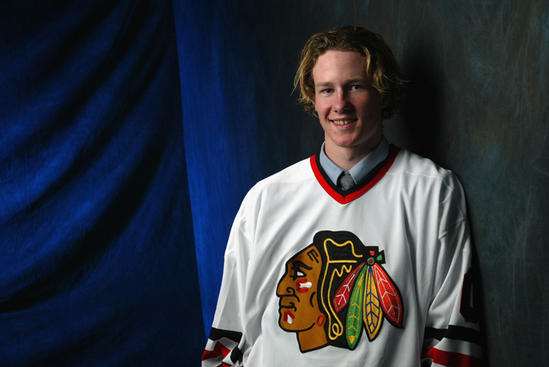 With Kevin Hayes moving on, some have said the Blackhawks draft in 2010 is a bust – even before Stephen Johns (above) plays his first full season as a professional.

Some look back at the Hawks’ drafts of the last few years and wonder where all the NHL talent is hiding. Since 2009, only three players drafted by the Hawks – Marcus Kruger, Brandon Saad and Andrew Shaw – have played more than 100 regular season games in the NHL.

But looking back through history, we find that rarely does any franchise have a complete draft class make an impact.

The model for excellence over the last 30 years has been the Detroit Red Wings, the franchise that dominated the 1990s like few franchises in professional sports.

At the draft, the Red Wings found a number of late-round gems between 1994 and 2004. Tomas Holmstrom, Pavel Datsyuk, Henrik Zetterberg and Jonathan Ericsson have all played in at least 325 regular season NHL games and were drafted after the fifth round in their respective classes.

However, looking back at that decade of drafts shows that not every class needs to be a home run for sustained success.

Digging deeper, we find that the Red Wings prove that each class needs to provide only one or two NHL regulars to keep a franchise on top – and Detroit did that well. Of the 98 players drafted by the Red Wings, 78 (79.6 percent) played less than 41 games in the NHL – half of one regular season. Indeed, 71 Wings picks (72.5 percent) didn’t play in a single NHL game.

Even the mighty Red Wings completely whiffed on 72.5 percent of their draft picks during a decade in which they were, without question, the class of the NHL.

Now, consider how the Blackhawks drafted while building the franchise back into a prominent, contending team.

Between 2001 and 2008, the Blackhawks were bad. In the six NHL seasons over that span, the Hawks played in one playoff series; they failed to make the postseason five consecutive years with a high point of 88 points during the 2007-08 campaign.

However, the front office was doing work to rebuild the franchise. However, 16 players of those 84 players selected have played at least 300 regular season games in the NHL. And, as was the case with the Wings, the Hawks’ current starting goaltender – Corey Crawford – doesn’t make that benchmark; Crawford has played 211 through the 2013-14 season.

Over a seven year period, 19 percent of the players the Blackhawks drafted have played at least 300 NHL regular season games; during the ten-year span we used for the Red Wings, only 13 percent reached that benchmark.

The Hawks, like the Red Wings, found productive players as well.

Five Red Wings picks during the window we compared have registered at least 300 points in the NHL (Holmstrom, Datsyuk, Zetterberg, Valtteri Filppula and Johan Franzen). Four Blackhawks selection from the seven-year period we used have already reached the 300-point plateau (Tuomo Ruutu, Duncan Keith, Jonathan Toews and Patrick Kane) and two more – Dustin Byfuglien (299) and Brent Seabrook (287) – will get there in the coming season.

So as Kevin Hayes moves on to the free agent market on Saturday, keep in mind that teams have built through the draft with varying degrees of success. Teams don’t hit on every draft pick, but winning franchises are able to supplement their NHL rosters from within by selecting one or two quality players each year.

7 thoughts on “Drafting A Winner”