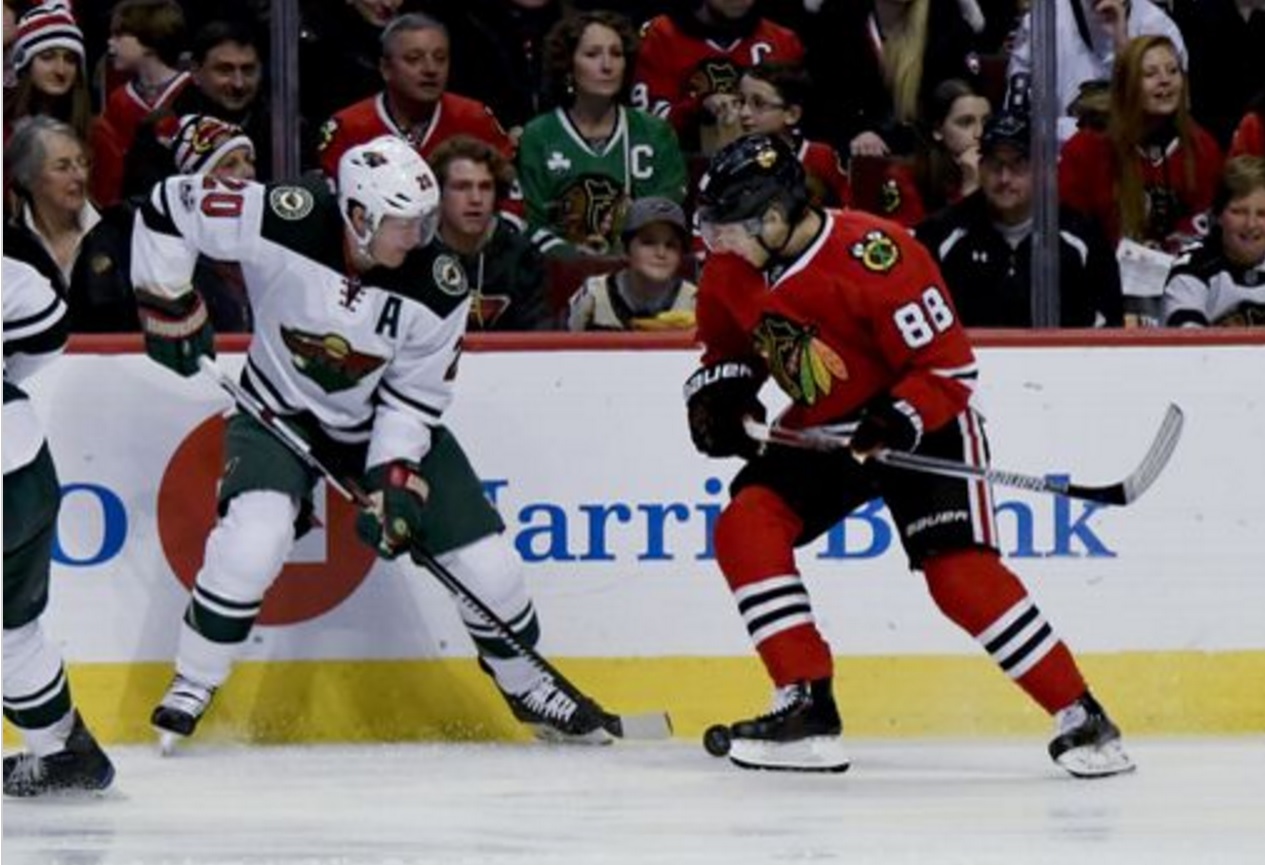 Sunday night was a battle for first place in the division between the Wild and the Blackhawks, and it lived up to its billing.

Patrick Kane came out of the room with a sense of purpose and dominate the first period. He scored his 13th of the season at 4:33 into the first and was on the attack the entire opening 20 minutes.

Even though the Hawks dressed seven defensemen, Chicago out-shot Minnesota 14-8 in the first and continued to carry the action early in the second. Kane added his second of the night and 14th of the season at 4:16 into the second.

Artem Anisimov had an assist on both of Kane’s goals.

However, the red-hot Wild weren’t going away easily. Anisimov went to the box and Nino Niederreiter scored on the power play to cut the lead to 2-1. Chris Stewart then tied the game at 11 minutes into the second, and the Blackhawks were under seige. The Blackhawks out-shot the Wild 16-15 in the second period but the visitors controlled the final 14 minutes of the middle period.

Five minutes into the third, Marco Scandella threw a shot wide of the net and the puck found Hawks-killer Jason Pominville on the doorstep for an easy goal. Minnesota now lead 3-2 after training by two early in the second.

The Hawks desperately tried to square the score, and got a power play with Corey Crawford on the bench inside the final minute. But Devan Dubnyk was too good and the Hawks passing wasn’t, and the Wild emerged with a big win and stand alone in first place in the division.

Jordin Tootoo and Andrew Desjardins were healthy scratches, leaving their zero combined points this season in the press box in favor of seven defensemen.

Kane finished the night with 12 shots on net in over 27 minutes of ice time, scoring twice. Jonathan Toews won 11 of 21 faceoffs in 20:35, while Anisimov won seven of 17 at the dot.

Artemi Panarin and Vinnie Hinostroza led the Hawks with three hits each, while Niklas Hjalmarsson had a team-high three blocked shots. Hinostroza also led Chicago with two takeaways in 13:46.

Crawford stopped 29 of 32 in the loss, while Dubnyk made 33 saves in the victory.