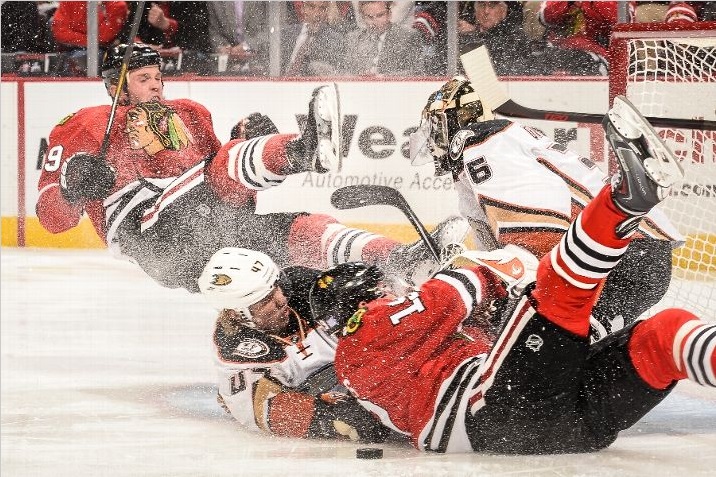 John Gibson held the Blackhawks scoreless at the United Center as the Anaheim Ducks started a four-game road trip with a big win in Chicago. Scott Darling returned to the net for the Blackhawks and played well against one of the better offensive teams in the league. Darling allowed only one goal, a short-handed third period goal from Devante Smith-Pelly, against 25 shots in the first loss of his NHL career.

On the short-handed goal, a bouncing pass from Brandon Saad eluded Brent Seabrook, who compounded the issue by falling down on the play. Smith-Pelly took it the distance and put a nice move on Darling for the game-winner.

Gibson, starting only his third game in the NHL this season, stopped 38 shots to earn the shutout victory.

Andrew Shaw led the Hawks with four hits and won seven of 14 faceoffs. Jonathan Toews won 11 of 19 at the dot to lead the Hawks, while Brandon Saad, Marcus Kruger and Brad Richards were undefeated in 12 combined draws.

Jeremy Morin skated a team-low 10:13 but tied Bryan Bickell and Brent Seabrook for the team lead with four shots on net. Morin finished the night with a plus-three CORSI and one blocked shot as well. Five of Morin’s 12 shifts came in the third period, and looked good throughout the night.

Unfortunately, the offense continues to struggle as the Hawks search for consistency. Chicago has scored more than two goals only twice in their first nine games of the 2014-15 campaign, and one of those performances was against the Sabres in the home opener.

Since Corey Crawford left the lineup, the Blackhawks have struggled to a 2-3-0 record. The Hawks have lost three of their last four, all by one goal; they’re 3-3-1 in one-goal games to open the season.

The Hawks power play continued to struggle against a Ducks penalty kill unit that had been mediocre to date. Chicago failed on all three of their power plays, including a 6-on-4 when coach Joel Quenneville pulled Darling to start a power play with 2:35 left in regulation. Anaheim came into the game tied with Ottawa and Edmonton for 20th in the league on the penalty kill (78.6 percent).

Crawford skated and will reportedly travel with the team to Ottawa. Whether or not he’s good-to-go is yet to be seen, but Darling has been good enough in his two appearances to give the coaches confidence in the organization’s depth moving forward. After the game, Quenneville said Darling has played well enough to give the coaches “something to think about.”