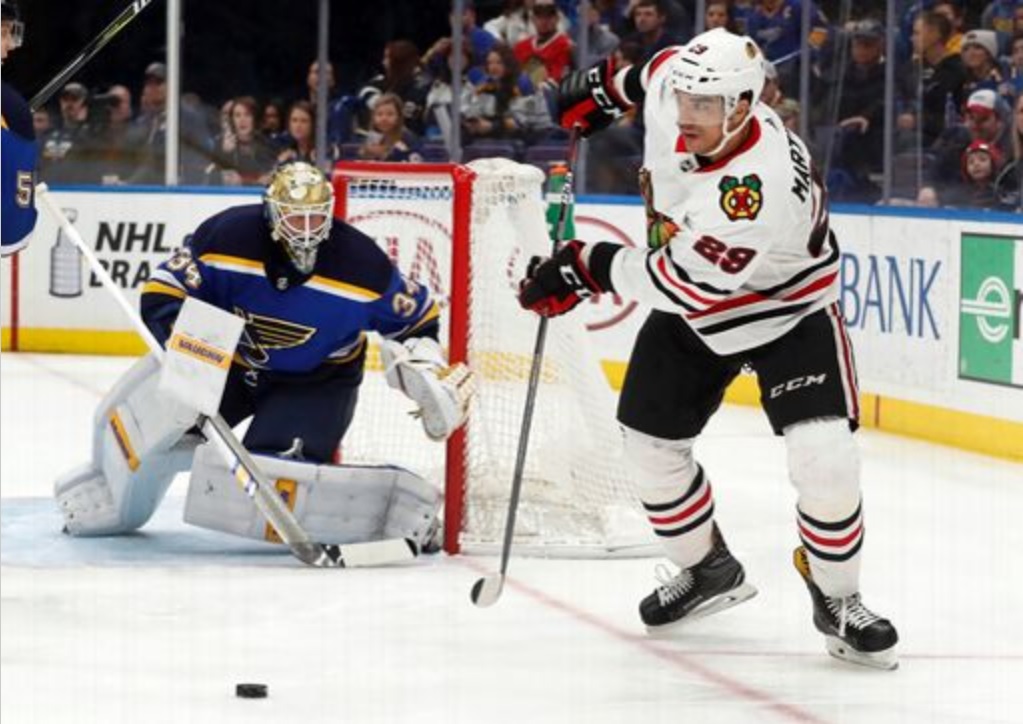 For their final regular season home game of the 2017-18 season, the St. Louis Blues hosted the Jonathan Toews-less Chicago Blackhawks.

St. Louis needed a win to stay in the playoff race.

Chicago needed a loss to stay in the mix for a high draft pick.

Of course neither side wanted to cooperate.

Robert Bortuzzo got St. Louis on the board early, scoring his fourth of the season.

Dylan Sikura picked up his third assist in as many games on Andreas Martinsen’s first goal with the Blackhawks. It was a terrible goal for Jake Allen to give up, an issue that didn’t end with the Hawks’ first goal.

The Blues out-shot the Hawks 14-8 in the first. They dominated most of the period. But Allen sucks, so the game was tied after 20 minutes.

Connor Murphy had to finish serving a minor penalty for 26 seconds to open the second period, which the Hawks successfully killed. But Brayden Schenn scored his 27th of the season at 47 seconds into the second period to give the Blues the lead once again.

Chicago didn’t quickly answer this time, though. In fact, Vladimir Tarasenko extended the lead to 3-1 with his 33rd of the season five minutes later.

It appeared to be another night of the Hawks getting out-skated, out-shot and out-worked.

Duncan Keith went to the box at 8:12 and the Blues could have put the game away. Instead, Blake Hillman unloaded and scored a short-handed goal for the first goal of his NHL career.

Another goal that wasn’t ideal for Allen to give up, and the score was 3-2. After 40 minutes the Blues had a 29-15 shot advantage but were leading by only one.

In the third, the Blues didn’t appear to want anything to do with putting the Hawks away, instead preferring to let the youngsters hang around. Martinsen had a couple more good, physical shifts early in the third and at 8:30 into the third Alex DeBrincat tied the game at three.

DeBrincat’s 28th of the season moved him into first on the Chicago roster, ahead of Patrick Kane.

JF Berube wasn’t great at times on Wednesday night, but he made enough saves to keep the Blackhawks in the game while the confidence on the other end of the ice was clearly low.

Chris Butler held Patrick Sharp and was sent to the box with exactly two minutes left in regulation. Again, the Blues were the team that needed a win on Wednesday night – not the Blackhawks.

With 8.5 seconds left in regulation, Duncan Keith scored his second goal of the season and gave the Blackhawks a 4-3 lead. Chicago would hang onto the lead through the final horn, dealing a potentially crushing blow to the Blues’ playoff hopes.

DeBrincat added an assist on the Keith goal to give Chicago’s star rookie a two-point night. Martinsen led Chicago with five shots on net and was noticeable all night. Brent Seabrook blocked a team-leading six shots.

Keith… had scored once this year… pic.twitter.com/i7uLeJfybn

The Blues HAD to win this game… pic.twitter.com/IaKonZXh3f

Wait wait wait… did I mention how bad the #Blackhawks power play has been all freakin year?