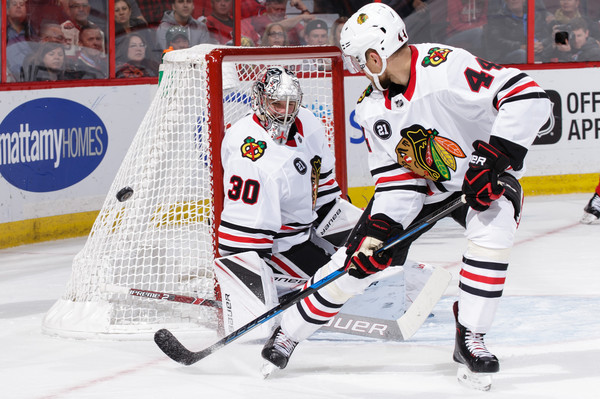 The Blackhawks ugly trend of burying themselves continued in Nashville on Saturday night.

Kevin Fiala, Eeli Tolvanen and Ryan Johansen scored in the game’s opening 4:11 to put the Hawks in a three goal hole right out of the gate. In fact, all three goals were scored before the Big Ten Championship Game, also scheduled for a 7 pm CT start, had kicked off.

Things got so bad that all hell broke loose at 7:18 into the first with the Blackhawks showing more raw emotion than they have in years.

After Duncan Keith was boarded (not called), Alex DeBrincat dropped the gloves with Matt Irwin; DeBrincat was giving up about five inches and 40 pounds in the fight but stood up for his veteran teammate.

Keith, on the other hand, was absolutely livid. He turned around as the officials were breaking up the DeBrincat-Irwin fight and found Miikka Salomaki. Keith approached him, dropped the gloves and went full WWE. For his efforts Keith piled up 29 penalty minutes, which included an ejection from the game.

Which means the defensively awful Blackhawks were down to five defensemen, none of whom had done anything yet at that point in the game but watch goals go in past Cam Ward.

During the seven-minute power play Nashville was given for Keith’s actions Brandon Saad stepped up and scored a short-handed goal to cut into the Nashville lead.

Brent Seabrook was credited with the only assist on Saad’s eighth of the year.

Unfortunately, Craig Smith scored 75 seconds after the Saad goal to push the lead back to three.

After 20 minutes, the Blackhawks had allowed four goals and put five shots on net.

Chicago scored the only goal in the second period, coming from Artem Anisimov.

Chicago out-shot Nashville 11-10 in the second but only cut the lead to two.

The only goal of the third period came within seconds of Ward getting to the bench for an extra attacker. The empty net goal made the final score 5-2.

The central issue with the Blackhawks right now is that they are simply not showing up when the puck is dropped. They’re getting their asses kicked in the first period every night and doing their best to fight their way back into games after digging an early grave.

It’s ugly and they aren’t fixing anything.

Jeremy Colliton is a new voice in the room, and he might be fighting an uphill climb he can’t win with a veteran roster right now. Since Joel Quenneville was dismissed the Hawks haven’t shown anything different on the ice except the changes in personnel. Dylan Strome and Brendan Perlini are nice players but they aren’t saving the day.

The core that has three rings should be better. They have to be better. And they haven’t been.

Patrick Kane was credited with zero – ZERO – shots on goal in over 21 minutes of action with his team down three goals after four minutes. That’s unacceptable.

Jonathan Toews was credited with one shot on net in 19:19 on the ice. That’s unacceptable.

Saad came to play. He had five shots on net, more than twice as many as any other Hawks skater. David Kampf won 12 of 16 at the dot and had a nice night. And, with Keith ejected, Gustav Forsling led all Chicago skaters with 28:48 on the ice. He led the Hawks with three blocked shots.

But this team is playing terrible hockey right now and haven’t shown the right kind of emotion to change anything.