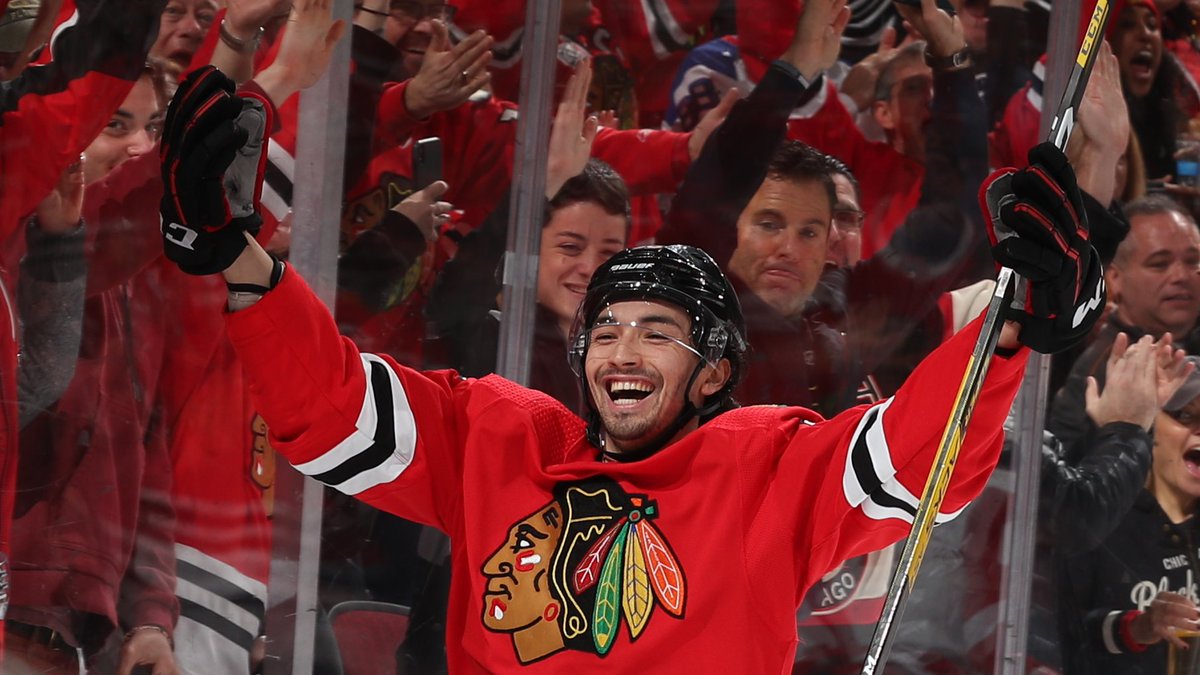 For years, Blackhawks fans have chanted “Detroit Sucks!” when the Red Wings have come to town. And, for the first time in more than 30 years, it’s true.

Detroit came into the United Center on Sunday evening having a historically bad season. The Wings were 4-15-2 away from home and, entering Sunday, had won three times since Nov. 14 (3-17-2).

The Blackhawks, on the other hand, were showcasing what the future might hold in Chicago. Seven of the 20 players dressed for Chicago had fewer than 50 career regular season games on their resume, including emergency backup goaltender Kevin Lankinen.

Which youth movement would be served in Chicago in front of a national television audience?

The Red Wings came into Chicago averaging 2.14 goals per game – dead last in the NHL. When the first period ended, Detroit had a 2-0 lead in Chicago.

Detroit’s power play entered the game ranked 26th in the league (15.3 percent), just behind the Hawks. Filip Zadina scored a power play goal at 3:21 into the first.

And Luke Glendening was credited with his sixth of the season at 16:53 into the first. The puck was redirected and Corey Crawford had little/no chance of stopping it.

The Blackhawks out-shot the Red Wings 12-8 in the first period and hit a couple posts but the two-goal deficit to a team playing as poorly as Detroit was ridiculous.

Chicago kept getting chances and kept throwing the puck around the ice early in the second period. Lots of passing, not enough shooting. And more wasted power play opportunities.

But Dylan Strome was able to get the Hawks on the board 15 minutes into the second, scoring his tenth of the season.

Alex DeBrincat picked up the only assist on the Strome goal.

One of the highlights of the Blackhawks’ season to date came 45 seconds later.

Dylan Sikura, who has been desperately trying to score his first career NHL goal, finally found the back of the net.

Erik Gustafsson and Patrick Kane picked up the assists, and Gustafsson (literally) picked up the goal scorer as Sikura celebrated a significant moment in his hockey life. His smile said it all – and there was energy back in the United Center with the score tied.

The Hawks out-shot the Wings 6-5 in the second period. That’s right, 11 total shots on net in 20 minutes. And the score was tied.

The turnover parade continued into the third period. Chicago had the better of the action but there wasn’t much sustained action on either end because of the sloppy passing and lack of puck control from both teams.

Eight minutes into the third period former Blackhawks defenseman Trevor Daley was hurt in front of Jimmy Howard in the Red Wings’ net. He struggled to get to his feet while the Hawks passed the puck in a circle – something they did far too much on Sunday night. But once Daley was on his feet Adam Boqvist navigated his way through traffic and scored his second of the year to give the Blackhawks a 3-2 lead.

Jonathan Toews and Duncan Keith were credited with the assists on Boqvist’s goal.

Neither team was able to score again until a stoppage in play gave Detroit the opportunity to pull Howard for a faceoff in the Blackhawks’ zone at 2:31 left in regulation. Toews got a good look at the empty cage with 60 seconds left but the shot was wide. Dominik Kubalik did not miss his shot at the open net with 19.4 seconds remaining.

Kubalik became the third Blackhawks’ rookie to score in the game; the fourth goal came from Strome, who is 22 years old.

Toews skated 22:11 and won nine of 14 faceoffs with an assist. Kane skated 21:02 and picked up an assist but was not credited with a shot on net in the game.

Dennis Gilbert bounced back from a rough night to be better against Detroit. He was credited with three blocked shots and a team-leading five hits in 15:43.

Ryan Carpenter was also credited with five hits but won only two of 14 faceoffs in the game.

Boqvist led Chicago’s defensemen with three shots on net in 20:32.

Detroit finished the night with only 21 shots on net. Crawford made 19 saves but wasn’t tested much. The Red Wings are going through an awful stretch right now and the Blackhawks took care of their business after an ugly opening 20 minutes.

The #Blackhawks improve to 20-4-4 in their last 28 games against Detroit.