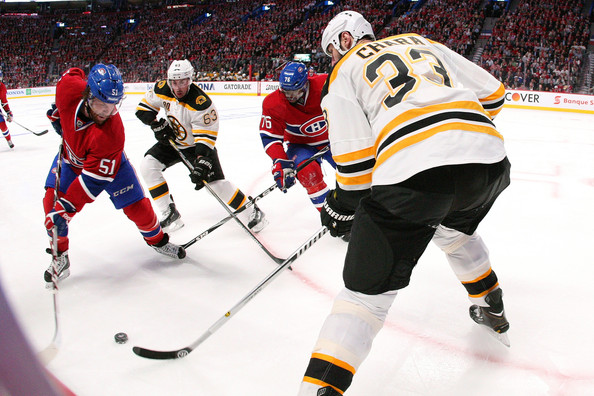 Like the Blackhawks, the Boston Bruins have some salary cap driven decisions to make before the 2014-15 season begins. What’s in store for the Bruins this year? Our list of subtractions is missing a TBD. With training camp holdouts Krug and Reilly Smith still an unresolved issue, Warsofsky will be pressed into action in the preseason. Those two key restricted free agents put the Bruins in a tough position; they’re already over the cap.

The cap will be an ongoing issue for Boston all season. Not only do they need to make decisions on Krug and Smith, but there are six veterans in the final seasons of their current deals. That list includes defenseman Johnny Boychuk and forwards Daniel Paille, Gregory Campbell and Carl Soderberg. It’s also worth noting that defenseman Dougie Hamilton will be a restricted free agent next summer as well.

One future contractual issue the Bruins were able to resolve – albeit in early September – was Krejci, who had 73 assists in 127 games over the last two regular seasons. The Bruins signed him to a six-year, $43.5M deal that will start in 2015-16 earlier this month.

Even with those issues, the Bruins should bring back a great core. Bergeron won the Selke Trophy and the NHL Foundation Award, and Tuukka Rask took home the Vezina Trophy at this summer’s NHL Awards. Chara finished the runner-up to Duncan Keith for the Norris Trophy as well.

There’s no question the Bruins are positioned to be in the postseason mix once again in the spring, but the major outstanding issues make them an organization to watch over the coming weeks.