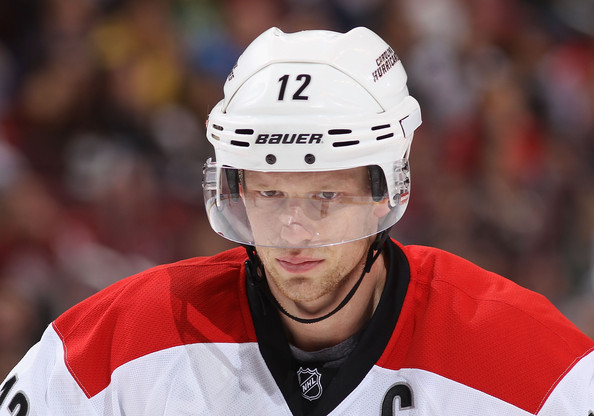 We  looked at the teams in the Pacific Division, and now we’ll turn our attention to the Eastern Conference.

In the Metropolitan Division, the Carolina Hurricanes finished only four points out of the cellar last year. But an injury-plagued team that was 10 points from a playoff spot looks to bounce back in a big way this year. The Canes needed to pay Justin Faulk, and the did last season. The 22-year-old posted a career-high 32 points (five goals, 27 assists) and ranked 20th among NHL defensemen in 5-on-5 iCORSI (239), and received a new six-year, $29M contract to keep him in Carolina.

That deal made a lot of sense for the Canes, but unfortunately, there hasn’t been a lot of luck in Carolina the last few years. And the lack of success from the franchise led to significant changes at the top: General Manager Jim Rutherford and head coach Kirk Muller were both relieved of their duties.

Ron Francis, who retired from the league only 10 years ago, takes over as the team’s GM. Francis’ first significant move was hiring former Red Wings assistant coach Bill Peters lead the roster that underwhelmed last year.

Carolina wasn’t incredibly active in free agency (see above), but their bigger need is their veterans to produce. It’s hard to believe that Eric Staal will only turn 29 in late October, but the Canes need their captain to be better this year. He’s coming off the lowest point production in an 82-game regular season since he registered only 31 points in 2003-04, his rookie season; Eric posted 53 points in only 48 games in the lockout-shortened 2012-13 season.

Eric, his brother Jordan (who added only 40 points in 82 games last year) and Semin are expected to support Skinner offensively, but the Canes need to have more than two players with more than 44 points to compete in the Metropolitan.

Eric and goaltender Cam Ward both have two years remaining on their current contracts – at a combined cap hit of $14.55M. They’re expensive and experienced, and the Canes need them both to bounce back if they want to taste the playoffs again this spring.

The Islanders will be better just by having John Tavares back from his knee injury, and the gap between the Canes and the top 8-10 teams in the East appears to be growing. Trade rumors will continue to surround their stars until they lead this team back to the postseason.