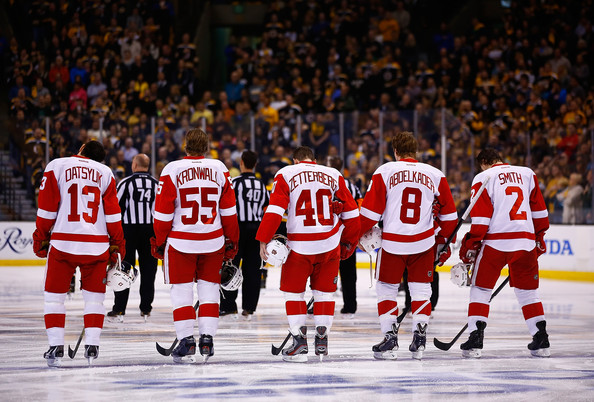 As we continue our 2014-15 season previews, we’ve already looked at the Buffalo Sabres, Florida Panthers, Ottawa Senators and Toronto Maple Leafs. Now, before they face off at the United Center this evening in the Hawks’ home preseason opener, let’s look at the Detroit Red Wings.

This season could be a significant changing of the guard in Detroit. With only cosmetic changes heading into the new year, the Wings are looking for youth to step into the lineup and supplement their aging stars. We’re starting to see some new names filter their way into the leader board for Detroit, with Nyquist and Tatar coming off strong 2013-14 seasons. But they’ll need their youth to mature quickly and their veterans to stay healthy into the postseason to get into the playoffs, much less advance further than last year’s first round exit.

The Red Wings biggest summer priority was getting defenseman Danny Dekeyser to sign an extension, which they recently accomplished with a two-year deal. Unfortunately, Detroit has already been dealt some tough training camp news with word that top prospect Anthony Mantha is out 6-8 weeks with a broken tibia.

The Wings still have Pavel Datsyuk, who remains a magician with the puck. But Datsyuk and Henrik Zetterberg combined to play only 90 games a year ago, and contributed 85 points in those contests. Having those two – and Mantha – healthy will be critical for the offense in Detroit this season.

Defensively, this is a big season for two of the younger Wings. Dekeyser, working in the first year of a two-year bridge deal, will hope to take another step forward 23 points he registered in 65 regular season games last season. And Brendan Smith, now 25, is only 10 short months away from hitting restricted free agency as well.

In net, Jimmy Howard struggled at times last year; his save percentage dipped and his goals against increased significantly over the prior season. With five seasons remaining on his contract, the Wings need their goaltender to be better this year.

Oh, and this is the final year of coach Mike Babcock’s contract. He would be the biggest name of any kind to hit the free agent market next summer… but most are speculating he’ll never get there.

Is this the year the Red Wings finally don’t make the playoffs? The biggest factor for them going forward is the health of their two superstar forwards and how well Mantha recovers from his preseason injury.