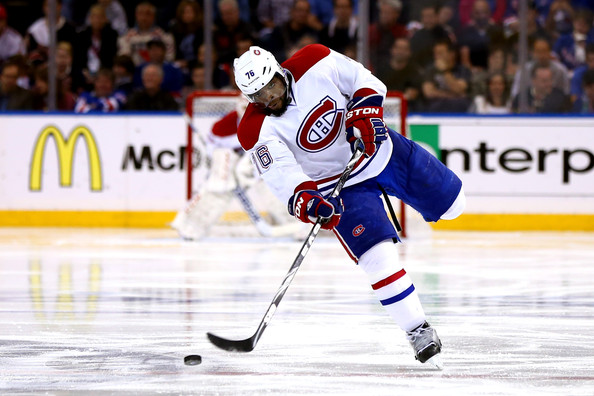 Leadership changes are taking place in Montreal. Will they pay off with another deep playoff run? Coming off a 100-point season and berth in the Eastern Conference Final, there was plenty of news out of Montreal this summer. Much of it came late in the offseason.

On Aug. 2, the Habs finally agreed to terms with restricted free agent and 2013 Norris Trophy winning defenseman Subban on a new deal. The eight-year, $72M deal will keep him with the Habs well into the future, and makes him one of only three players on the Montreal with a cap hit of more than $5M for the coming season.

With Gionta gone, the Habs have decided that defensemen Subban and Andrei Markov and forwards Pacioretty and Tomas Plekanec each will serve as alternate captains for the 2014-15 season.

The losses of Gionta and Gorges will impact the leadership in the room, and the Habs will quickly look to find someone to fill the 21 minutes Gorges played on the blue line each night; he was their top penalty killer last year, spending 3:21 per night short-handed.

Even with those areas to fill, the Habs bring back a good core group. Pacioretty has established himself as a bona fide top line scorer, and Brendan Gallagher finished last season with 19 goals. The distraction that was the disappointing addition of Vanek will be a thing of the past this season, and the forward group can enter the new season with Pacioretty, Gallagher, Plekanec and David Desharnais leading the way.

The Habs will look for someone other than Markov and Subban to step up their production on the blue line this year; they were the only two Montreal defensemen to finish last season with more than 17 points. Filling the hole left by Gorges will be an early season key.

In net, the Canadiens will bring back Carey Price who was fantastic leading Canada to gold and the Habs to the brink of the Cup Final last season. As a team, Montreal finished eighth in the NHL in goals against last season (2.45 per game).

Without the distractions of Subban’s pending contract and the Vanek experiment handing over their heads, this stands to be an opportunity for the Canadiens to step forward as one of the stronger teams in the division and conference.