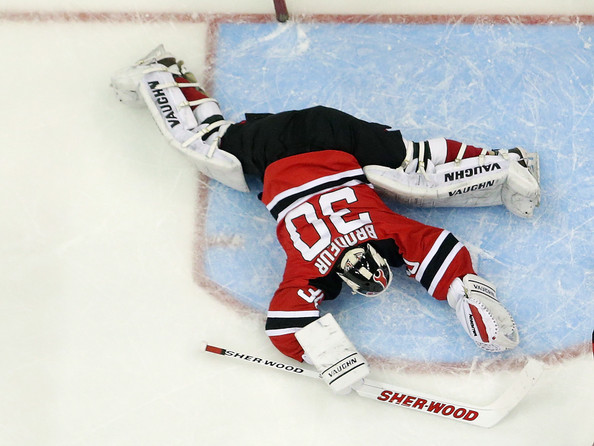 As we look ahead to the 2014-15 NHL season, we have already discussed the Pacific Division. We have now turned our attention to the Metropolitan Division, beginning with the Carolina Hurricanes. Now let’s discuss a team that will be without a familiar face for the first time in a generation: the New Jersey Devils. The Devils love them some old guys.

With the additions of Cammalleri (32) and Havlat (33) to an already aging roster, New Jersey now has more than $29M committed to forwards who are on the wrong side of their 30th birthday. They will join last year’s leading scorers, Jagr (42) and Patrik Elias (38), with Tuomo Ruutu (31), Michael Ryder (34), Ryan Clowe (who will turn 32 before the season opens) and Dainius Zubrus (38) on an offense that ranked 27th in the NHL last season.

On the blue line, their top three ice time players are also aging. Greene (31), Zidlicky (37) and Bryce Salvador (38) have an interesting season coming up. Greene scored a career-high eight goals last season, and eclipsed 30 points for the first time since the 2009-10 campaign. Likewise, Zidlicky reached the 40-point plateau for the first time since 2009-10 last year.

What makes this season fascinating in New Jersey will be their payroll. Eight veterans – many of whom we’ve mentioned already – are in the final years of their current contracts. Jagr, Zidlicky and Salvador may be looking at the end of the road, while Havlat and Damien Brunner will have their eyes on a new contract at some point in the next 10 months.

The beginning of the roster turnover has begun in net, where the team has parted ways with future Hall of Famer Martin Brodeur. This summer’s seven-year, $42M contract given to Cory Schneider shows the team is committed to him between the pipes, but may be a pain point for fans who loved Brodeur.

Henrique and Travis Zajac will be counted on to bring more offense this season, and will be the centerpieces of the rebuild. On the blue line, eyes will be on Adam Larsson and Jon Merrill as they look to take the next step in their maturation as well.

If the season goes south early, the Devils may be well positioned to move their veterans at the deadline to help contending teams.