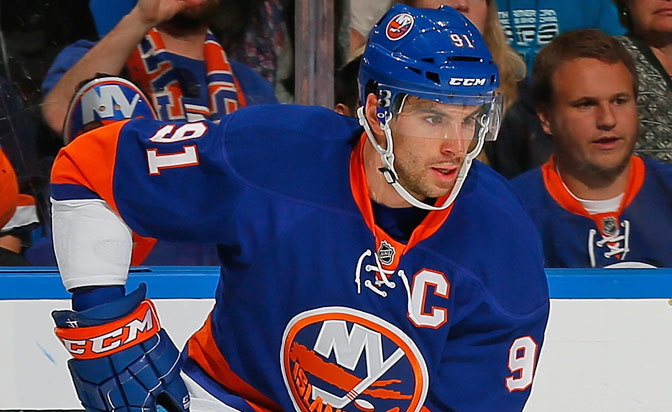 As we look ahead to the 2014-15 NHL season, we have already discussed the Pacific Division. We’re now half-way through the Metropolitan Division, having previewed the Carolina Hurricanes, New Jersey Devils and Washington Capitals.

Now, let’s take a look at a young team getting their captain back from an Olympic injury. Will John Tavares lead the Islanders back into the playoffs? Tavares was in the heart of the Hart Trophy conversation with 66 points in 59 games before an Olympic injury cut his season short. He still finished tied for the lead in assists and led the Isles in power play points as well. With word that he’s back on the ice at 100 percent, Islanders fans should have increased optimism heading into the new season.

But a healthy Tavares isn’t the only reason for hope.

Finally, it appears the Islanders have a goaltender. Over the summer, they signed Halak to a four-year, $18M deal and the 29-year-old provides an immediate upgrade from the Nabokov… “era.” Halak was traded out of St. Louis last year, and posted a .930 save percentage in Washington after being acquired.

The addition of Grabovski will add another depth piece to their offense, which finished last season ranked 17th in the NHL (2.63 goals per game). Also, moving Thomas Vanek further into the past will only help the young roster heading into the coming season.

It’s also worth noting that the Isles are well situated financially, and could be a player in the preseason trade market with teams like the Blackhawks and Bruins putting defensemen on the market to get under the cap. Adding a Johnny – Oduya or Boychuk – could bolster a young blue line and help the Isles make a playoff push.

Having Tavares and Halak in the lineup over an 82-game season could be all the Islanders need to make a 15-18 point jump in the standings. If they’re able to acquire another top-four defenseman in September, the Metropolitan should take notice.