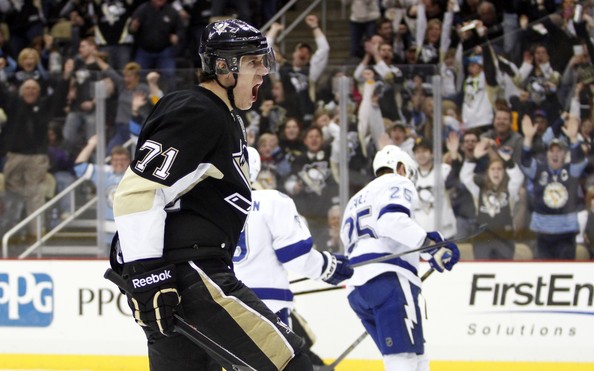 As we look ahead to the 2014-15 NHL season, we are working our way through Metropolitan Division. We have already previewed the Carolina Hurricanes, New Jersey Devils, Washington Capitals, New York Islanders, Columbus Blue Jackets and Philadelphia Flyers, and earlier previewed the Pacific Division.

In Pittsburgh, Sidney Crosby had another banner year statistically. But, once again, the Penguins failed to reach the Stanley Cup Final. After an offseason that saw significant changes – including the general manager and head coach – how will the Penguins look in the new season? It was a strange offseason for Pittsburgh, who opted to fire Ray Shero and leave Dan Bylsma as a dead man walking for a few weeks until Jim Rutherford was named the new general manager. Once Rutherford pulled the plug on the Bylsma era, the search for a new coach took until almost the end of June when Mike Johnston was named the new bench boss.

Six years. That’s how long Bylsma was behind the bench in Pittsburgh, where he became the franchise’s all-time winner in coaching victories. It’s also how long his replacement, Johnston, spent the Portland Winterhawks of the Western Hockey League before the Penguins granted him his first NHL head coaching gig.

The 57-year-old Johnston inherits a team with the most offensively dominant player in the game. Crosby rightfully won many of the league’s prestigious postseason honors, but this will be a trying season for him. Not only will there be a new man making decisions upstairs and a new voice behind the bench, but there will be a number of new faces on the ice around Crosby and Evgeni Malkin this year.

Replacing Neal and Jokinen (31 goals and 72 assists combined) will be Hornqvist and Spaling, a couple of former Predators who combined to post 35 goals and 50 assists last year. Ehrhoff will look to step into the minutes vacated by the departed Niskanen, and youngster Olli Maatta will likely see increased minutes as well after a 29-point season.

One key player to watch this season is Marc-Andre Fleury, who enters the final season of his contract hoping to re-establish himself as an elite netminder. If he struggles early, the Pens might look to move him and his $5M cap hit.

This is the biggest collection of change in Pittsburgh since Crosby and Malkin arrived. How will they – and their rookie head coach – work together?

The reality in the Metropolitan is that the division is still chasing the Penguins. There’s too much talent – when healthy – for them to end up anywhere but the top of the division. But winning the regular season division title means nothing in Pittsburgh. Getting back to the Cup Final is the goal.