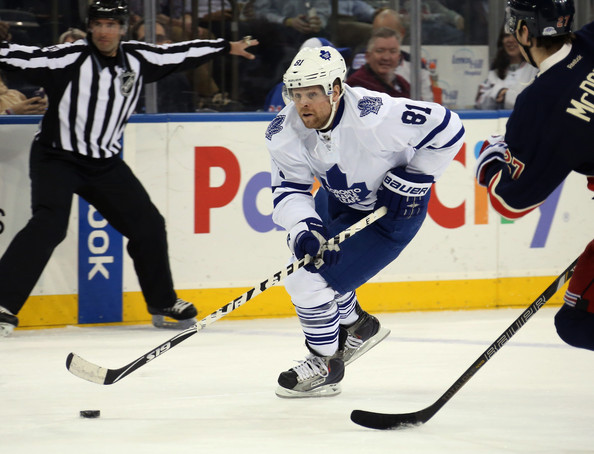 As we continue our 2014-15 season previews in the Atlantic Division, we’ve already looked at the Buffalo Sabres, Florida Panthers and Ottawa Senators. Let’s shift our attention to the Toronto Maple Leafs.

Toronto came up nine points short of the playoffs last season. Will this year be any different? The mediocrity the Leafs have put on the ice in recent years led to some significant changes off the ice in Toronto. Brendan Shanahan left his role in the NHL league office to become the president of the Leafs, and he wasn’t the only major addition.

Kyle Dubas was hired as the assistant GM, working with Dave Nonis. And the organization the as recently as last season openly questioned advanced statistics made three significant hires in that specific area: Darryl Metcalf, the founder of ExtraSkater.com, and bloggers Cam Charron and Rob Pettapiece.

With a new focus on advanced statistics and Shanahan making decisions, this will be a fascinating season in Toronto. The team’s leaders above make it appear that the show in Toronto was all Kessel, but last year the Leafs had a few good weapons working.

James van Riemsdyk, brother of Hawks’ blue line prospect Trevor, scored 30 goals in 80 games last season and continues to emerge as a star. And Joffrey Lupol scored 22 goals in spite of being limited to 69 games.

While the Leafs did have a few players other than Kessel enjoy decent offensive seasons, the team finished 14th in the league in goals scored per game (2.71) while ranking 26th in the NHL allowing 3.07 goals per night. Defensively, the Leafs were bad last year.

Phaneuf, who somehow remains the captain in Toronto, had his highest penalty minute total since the 2008-09 season. Gunnarson was traded for Polak, Robidas signed as a free agent, and Jake Gardiner signed a five-year extension this summer. Youngster Morgan Reilly will look to increase his impact this season after posting 27 points last year.

In net, James Reimer has two years remaining on his contract but will begin the season behing Jonathan Bernier on the depth chart. Bernier, however, is one season away from restricted free agency.

The Leafs have seven players headed to unrestricted free agency next summer, and both Bernier and Nazem Kadri will be restricted free agents. With that many players in walk-years and the influence of a new front office, this will certainly be a season of interest in Toronto.