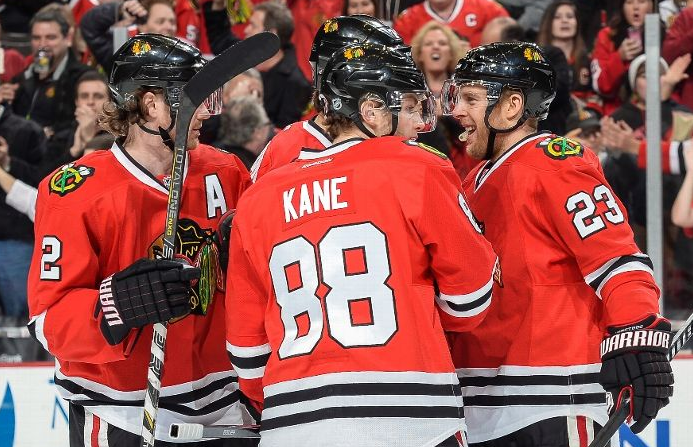 The Vancouver Canucks landed in Chicago early Friday morning after a 4-1 loss in Dallas, but backup goaltender Eddie Lack did everything he could to keep a tired team in the game.

When dust settled – after 65 minutes and a lengthy shootout – Lack earned the second point for the visitors.

Antti Raanta had another strong game, making a number of big saves late in the third and in the overtime. He made 22 saves in regulation and overtime. For Vancouver, Lack stopped 24 of 26.

The shootout went eight rounds, with Ryan Kesler winning it for the Canucks.

Patrick Kane continued is incredible season with another multi-point game. He assisted on Kris Versteeg’s goal in the first, and scored the Hawks’ second goal in the middle frame. The Hawks were up 2-0 less than five minutes into the second period, but weren’t able to hang on for the victory.

Zack Kassian scored less than four minutes after Kane to get the Canucks on the board, and Daniel Sedin made a fantastic play to tie the game in the middle of the third period.

Jonathan Toews was relied on heavily in the game, skating 21:52 and winning 10 of 18 faceoffs. He was also credited with two hits, one takeaway and one blocked shot in the game.

The Hawks’ power play was kept quiet for the first time in December, but the penalty kill was successful on all four of Vancouver’s power plays. Marcus Kruger skated only 12:17, but spent 4:49 short-handed. Kruger won five of seven faceoffs and was credited with two blocked shots and one hit in the game. Vancouver was credited with seven shots on their four power plays.

Michal Handzus skated 4:35 short-handed on Friday night, and has been good with Kruger on the penalty kill since returning from injury. He won half of his eight faceoffs in the game and was credited with one blocked shot.

Brandon Bollig (7:34) and Ben Smith (8:07) were held to only 13 shifts in the game in spite of the Canucks only rolling three lines for the entire third period in the second night of a back-to-back.

Johnny Oduya, Michal Rozsival and Handzus also had assists on the night.

15 thoughts on “Eddie Lack, Canucks Come Back To Win In Chicago”