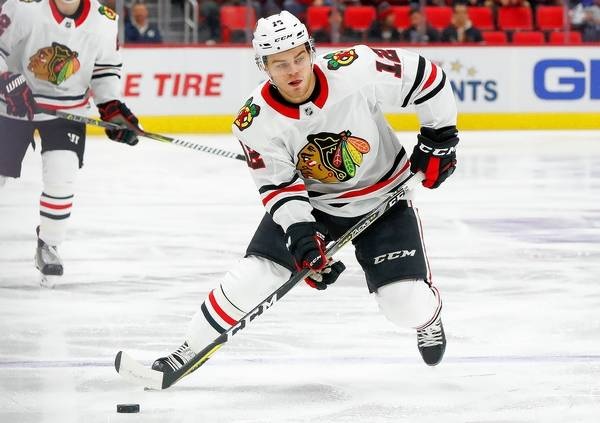 To be fair, Chris Kunitz didn’t dress for the Hawks on Saturday night and they still lost.

The opening 20 minutes in Florida were less than ideal. The Panthers put 16 shots on net against Cam Ward, scoring twice. Chicago put nine on net and failed to score once.

Brandon Manning, one of the “impact” signings from the summer to “help fix” the blue line, did pick up seven penalty minutes in the game’s first seven minutes. He went to the box at 4:12 and Florida scored on the power play. Soon after returning, he dropped the gloves with former Blackhawks forward Troy Brouwer. Manning landed a couple shots before Brouwer put him on the ice. Many in Chicago were undoubtedly dusting off their Brouwer jerseys later in the period.

After the telecast told the viewing fans in Chicago that Florida was among the worst second period teams in the NHL, the Hawks went to work quickly. David Kampf got the party started 49 seconds into the period with his third of the year.

That power move was followed by a terrific play between Brandon Saad and Patrick Kane less than five minutes later. Saad flipped a nice backhand pass to the front of the net and Kane tipped it home for his 13th of the year.

Suddenly, what appeared to be a runaway train was tied at two.

But, to borrow from Lee Corso, not so fast my friend!

Less than three minutes after scoring, Kane flew out of the zone and left Aaron Ekblad all alone. The Panthers defenseman gave Florida the lead back with his fourth of the year.

Frank Vatrano picked up a penalty for unsportsmanlike conduct at 8:55 and the Hawks spent the entire two minutes in the offensive zone, though most of it was playing patty cake around the outside of the zone (you know, the power play they brought in the noted PP guru to employ). With the same five skaters stuck on the ice after Vatrano left the box, Florida attacked and Vatrano ended up scoring his seventh of the year to extend the lead back to two.

After 40 minutes, the Panthers had a 34-19 shot advantage. Cam Ward was trying his hardest, but wasn’t getting much help at all.

The game stayed at 4-2 until the middle of the second period but the Blackhawks were doing almost all of the shooting. Chicago allowed only one shot in the first ten minutes of the third period, and were able to get back on the board – while killing a penalty.

Kane was serving his second minor penalty of the night and Alexandre Fortin exploded up the ice. He crashed the net and a bouncing puck somehow ended up in the net behind James Reimer, giving Fortin a short-handed goal and cutting the lead back to one.

Fortin’s goal gave Chicago three in the game, a mark they’ve reached only four times in their last 13 games. The last time the Hawks scored four was on Oct. 25 against the Rangers.

With 5:43 left in regulation, John Hayden got a shift with Jonathan Toews and Saad. Hayden made a strong move to the side of the net and put the puck in front. The rubber found its way through traffic and Saad had a great look at an almost-empty cage, but put it off the crossbar. Saad raised his arms but the call on the ice of no-goal was correct.

Brandon Saad thought he scored … but he hit the crossbar instead. #Blackhawks pic.twitter.com/lY9HLyPA2n

And so on we went with the game still at 4-3 in favor of the Panthers.

With less than 5:30 left in the third, Florida put their second shot on net in the period.

Ward went to the bench with 1:44 left in regulation, at which point Florida had only put four shots on net in the third.

In what appeared to be a desperate garbage play, Kane dumped the puck in from just across center ice with only 15 seconds left. But it found Saad behind the net, and he threw a pass backward to a wide open Alex DeBrincat who slammed home his tenth of the year to tie the game with 0.8 seconds remaining in regulation.

And we got overtime. For both teams, this was the third game in four nights as well.

Saad, Kane and Gustav Forsling each had two points in regulation.

Chicago opened overtime with Toews, Kane and Duncan Keith. Saad jumped over the boards with Nick Schmaltz and Erik Gustafsson for the second shift.

Off a Kampf faceoff win, Gustafsson maneuvered through the zone and fired home a game-winning goal to give the Hawks a road victory for the first time since Oct. 20.

The Blackhawks out-shot the Panthers 22-4 in the third period and overtime.

Four of the Hawks’ six defensemen skated more than 20 minutes in the game. The lowest ice time on the back end was Henri Jokiharju at only 15:01 and Manning was limited to under 16 minutes but also sat in the box for seven minutes in the first period. Keith led all Chicago skaters with eight shots on net.

Kane and Toews both skated almost 25 minutes in the game. Kane had two points while Toews won 12 of 25 at the dot; they combined to put ten shots on net.