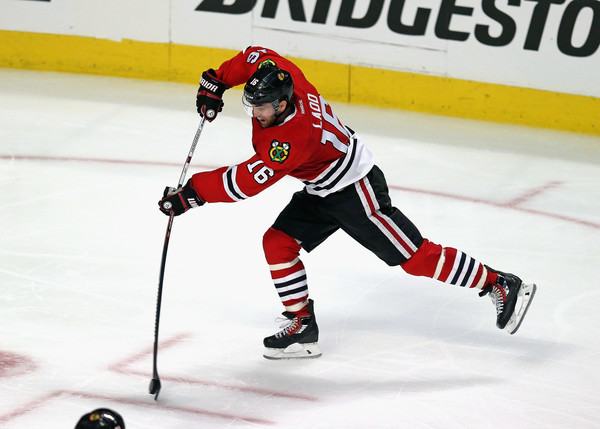 After the dust settled from a wild July that saw the Blackhawks predictably trade away Patrick Sharp and shockingly trade away Brandon Saad, the 2015-16 season began with Chicago defending their Stanley Cup championship.

During the months that followed, Hawks GM Stan Bowman made a number of trades to not only improve the team, but create cap flexibility for the next deal – or next year. It was clear at the deadline that Bowman was going all-in on the 2016 postseason, but a first round exit shows that the Hawks didn’t have enough to win another championship.

There are two minor deals the Blackhawks made at the deadline that we won’t review here because they had no impact on the NHL roster. On Feb. 29, Bowman:

So how did Bowman’s trading work out? Let’s look back at the deals he made during the 2015-16 season.

[Note: you can view every move Bowman has made since taking over as GM of the Blackhawks here.] After Daley was acquired in the deal that sent Patrick Sharp to Dallas, he was – in theory – the puck-moving defenseman who would replace free agent departure Johnny Oduya. Daley averaged 17:30 per game in October but didn’t impress or fit in very well, and his ice time quickly started to disappear. He asked for a trade out of Chicago and received one 11 days before Christmas in a deal that bought the Blackhawks some cap flexibility.

Pittsburgh retained one-third of Scuderi’s cap hit for the remainder of the 2015-16 season as well as the 2016-17 season in this trade.

Was Daley the answer on the blue line for the Hawks? No. His style of game is much better suited for Pittsburgh, and he’s played well there with more power play ice time. It’s funny to look back now at this seemingly insignificant trade that finally completed the #FreeMorin movement. Panik struggled to crack the lineup in Toronto, and Morin simply couldn’t buy a shift for Joel Quenneville. In fact, Panik did not appear in a regular season game for the Leafs this season before the trade.

Panik, 25, scored six goals and added two assists in 30 games with the Blackhawks, averaging 10:50 per game during the regular season. But in the playoffs, he suddenly became an important piece of the puzzle. Panik finished the Hawks’ postseason third on the team with 23 hits in seven games, his ice time increased by two full minutes per game from the regular season, and he started on the top line with Jonathan Toews and Patrick Kane in the deciding game.

Panik is a restricted free agent this summer, but his performance down the stretch makes him a player the Hawks could/should entertain bringing back at an affordable cap hit. The other NHL roster player brought in from the Sharp deal with Dallas was Garbutt who, ironically, was thought to be a player who would play the role Panik ultimately filled in the postseason. The Blackhawks traded him to Anaheim a little more than half-way through the season as his ice time started to disappear.

Garbutt moved on and was a more productive player for the Ducks, averaging 66 more seconds per game on the ice and picking up a short-handed goal for the Ducks.

In six games with the Blackhawks, Sekac put 11 shots on net and picked up one assist while averaging 10:50 on ice per game. He was claimed off waivers by Arizona on Feb. 27 and was equally uninspiring in his time with the Coyotes down the stretch. This trade represents arguably the biggest in-season addition of Bowman’s tenure as GM of the Blackhawks. Moving a top prospect in Dano, who was acquired in the trade that sent Brandon Saad to Columbus, was a significant price. Throw in the Hawks’ first round pick in this summer’s draft and there was no question the Hawks were going for it this year.

Winnipeg retained 36 percent of Ladd’s cap hit for the season as part of the trade. The Blackhawks do not lose their third round pick in 2018; the condition on that selection was the Hawks winning the Stanley Cup.

Ladd, 30, was a familiar face and performed well after coming back. He led the Blackhawks with 36 hits in the series against the Blues. But, because he’s a veteran who was the captain of the Jets, his value will undoubtedly price him out of Chicago this summer.

Here are Ladd’s stats from the regular season:

Dano, meanwhile, had scored one goal with one assist in 13 games for the Blackhawks this season before he was dealt to Columbus. The 21-year-old jumped right into the Jets’ lineup and produced four goals and four assists in 21 games to close out the regular season. He is signed thru the 2016-176 season on his entry-level contract ($925k cap hit). A complicated deal involving two veteran defensemen who simply weren’t working out in their current situations, the Hawks and Kings swapped players and cap issues.

Ehrhoff had struggled with health issues over the past few years but, though he looked okay in his first few games with the Blackhawks, never got into the rotation for Quenneville. He appeared in only eight regular season games for Chicago, posting two assists.

Scuderi received a hero’s welcome when he returned to LA and he performed well for the Kings, posting six assists in 21 regular season games down the stretch. He was a terrible fit, especially with Michal Rozsival being essentially the same too-old-to-do-much role player at this point.

Here’s the breakdown of Scuderi’s season, split between Pittsburgh, Chicago and Los Angeles:

In this deal, LA retained 15 percent of Ehrhoff’s cap hit for the rest of 2015-16 season; Chicago retained 50 percent of Scuderi’s cap hit thru the end of 2016-17 season. So there will be $1.125M in dead money on the books for the Blackhawks next year from Scuderi. This is the deal that has many Hawks fans scratching their heads still. Weise and Fleischmann were brought in and played decently when given the opportunity… but Danault was arguably the top prospect under contract and could have been a good asset at the dot in the future.

Weise, 27, average more than four fewer minutes per game with the Hawks (9:57) in 15 games than he did in 56 games with Montreal (14:21). He had 14 goals and 12 assists when he was traded out of offensively-challenged Montreal, but was credited with only one assist in his regular season action for Chicago. Of course, he came on and scored a game-winning goal in Game Six against St. Louis.

Weise is an unrestricted free agent this summer and is coming off a contract that had a $717k cap hit. It will be interesting to see if the Hawks make a play to keep him around after this season after he struggled to get regular ice time for Quenneville.

Fleischmann, also an unrestricted free agent this summer, average more than 14 minutes per game after he was acquired and scored four goals in 19 regular season games for the Hawks. He disappeared in the playoffs, however, finding himself a healthy scratch in the closing games.

Danault, 23, had only one goal and four assists in 30 games with Chicago during the 2015-16 regular season. In comparable ice time with the Habs, Danault had three goals and two assists in 21 games. He is a restricted free agent this summer.

So how did Bowman do?