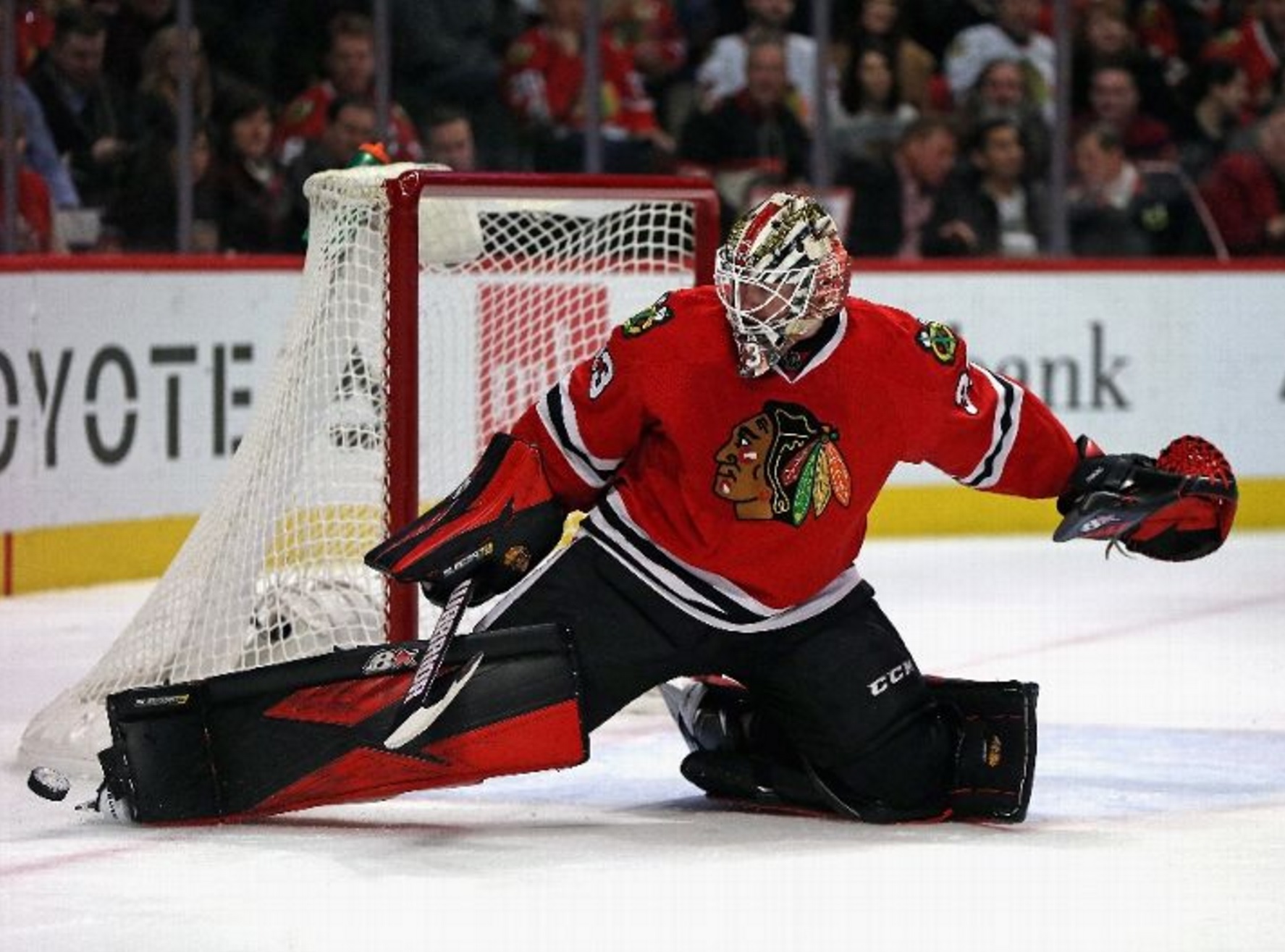 The Blackhawks had lost three games in a row.

They were without forward Marian Hossa.

But apparently the perfect remedy for those issues was visiting the United Center on Monday when Toronto came calling.

Only 2:33 into the game, Brandon Mashinter unloaded for his third of the year to give the Blackhawks a 1-0 lead. A little more than nine minutes later with the Hawks on the power play, a mess in front of James Reimer ended up with the lead growing to two.

The goal was initially credited to Jonathan Toews, but replays appeared to indicate Andrew Shaw put the loose puck home. Late in the second period, the goal was given to Shaw, his tenth of the year, with the assists going to Patrick Kane and Duncan Keith.

Chicago added a third goal less than two minutes into the second period when Brent Seabrook unloaded from the point for a power play marker. The goal is the eleventh of the year for Seabrook, extending his new career best.

Once the third goal was on the board, the Leafs appeared to put their attack in neutral. Scott Darling got the start and made a magnificent save in the second period to keep Toronto off the board, but wasn’t tested much over the first 40 minutes.

At 15:28 into the second, Artemi Panarin was called for a double-minor when a high stick cut Morgan Reilly. His teammates killed the penalties and finished the second period with their three-goal lead still in place. Toronto out-shot the Hawks 15-5 in the middle stanza but didn’t have many good scoring chances; Darling one enormous save was not only the highlight of the period, but robbed the Leafs’ best opportunity.

Toronto was out-shooting the Hawks 26-21 after two, and Chicago had blocked another 18 shots to only six for the Leafs.

The Hawks got an early power play in the third when Michael Grabner went to the box for Keith, and Chicago made it count again. Panarin blasted a shot through Reimer to push the lead to four, and Kane picked up his third assist of the night. The assist was the 400th regular season helper of Kane’s career.

Keith was also credited with another assist on the Hawks’ third power play goal of the evening.

Chicago’s superstar scored his 34th of the season to push the lead to 5-0 less than three minutes after Panarin’s goal. The marker gave Kane four goals and four assists in his two games against the Leafs this season.

Quickly after the Kane goal, the Hawks got a four-minute power play as Martin Marincin caught Dennis Rasmussen in the mouth with a high stick. Brandon Mashinter got a look at a wide open net on the delayed penalty but hit the post in a move that displayed remarkable sportsmanship…

The Hawks got a 5-on-3 when former Chicago draft pick Byron Froese went to the box for hooking Toews. With two Leafs players in the box, Teuvo Teravainen scored for the first time in what felt like forever to make the lead 6-0. The goal was Teravainen’s tenth of the year, the fourth of the night with an advantage for the Hawks, and a third assist for Keith.

As the second minor penalty to Marincin expired, Viktor Svedberg scored his second of the year to make the score 7-0. Toews and Shaw picked up the assists on Svedberg’s goal.

Reimer stayed in the net for the entire debacle for the Leafs.

Unfortunately, Toronto wouldn’t let everything end perfectly. Marc Arcobello ended Darling’s shutout bid with 8:54 left in regulation. His third of the year came only 46 seconds after Svedberg’s goal, with the only assist going to former Hawks forward PA Parenteau. Parenteau added a power play goal after another tremendous sequence from Darling to make the score 7-2 with less than five minutes left in regulation.

At the point that Parenteau scored, Darling had stopped 34 of 36 in a really good game for the Hawks’ backup netminder. He finished with 35 saves in a strong performance that was overwhelmed by the offensive explosion.

Vince Hinostroza, who was recalled when Marian Hossa was placed on IR on Sunday, skated on the fourth line as Richard Panik moved up to the top line with Toews and Shaw in place of Hossa. Panik was acquired earlier this year from the Leafs in a trade for Jeremy Morin. Erik Gustafsson, Rob Scuderi and Jiri Sekac were the scratches for Chicago.

15 thoughts on “Falling Leafs Get Blackhawks Back To Winning Ways”