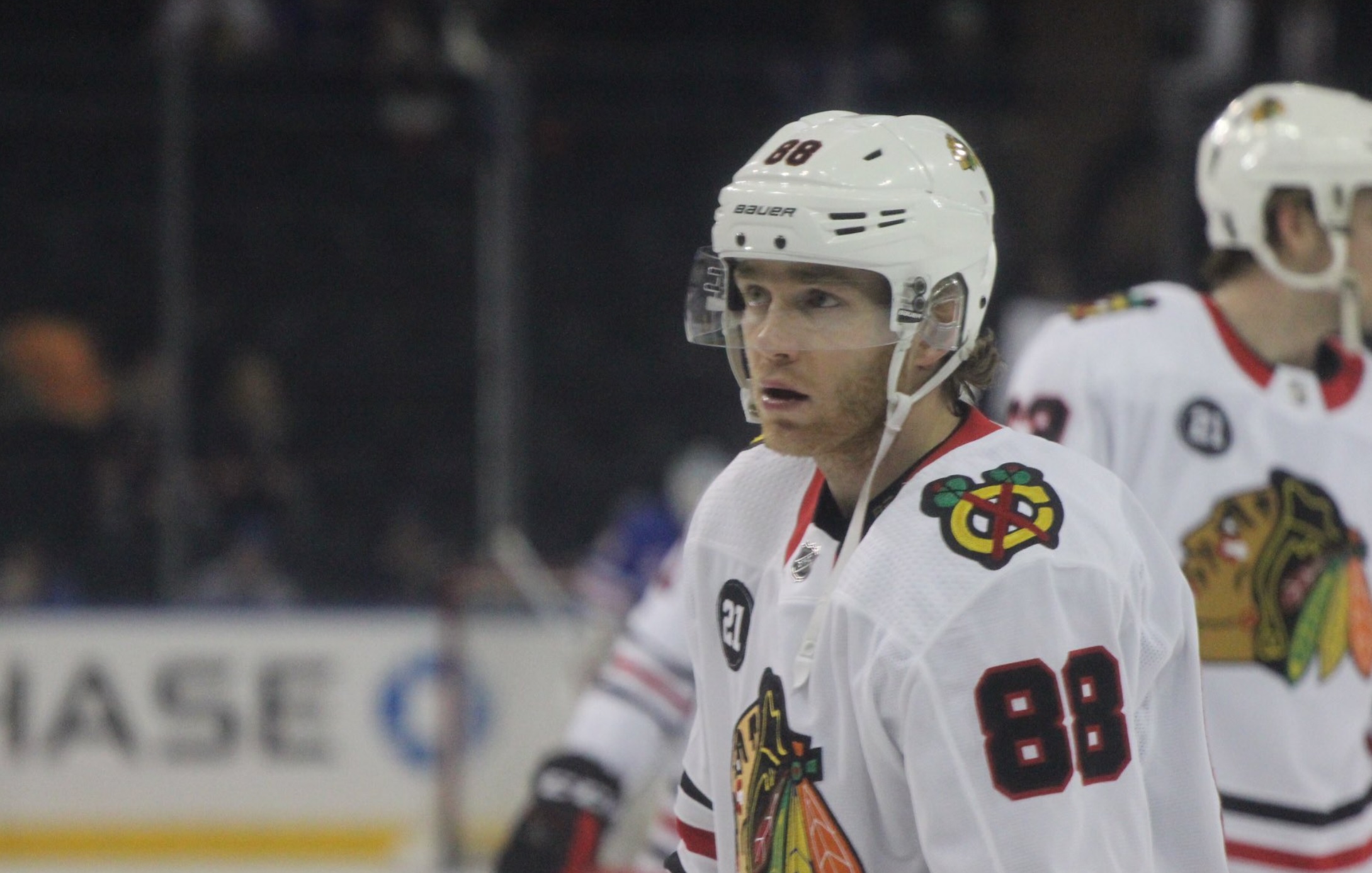 After getting their asses handed to them in New Jersey on Monday, the Blackhawks looked to bounce back at Madison Square Garden against the Rangers.

Both teams are in the midst of a rebuild.

Both teams have a Strome.

The puck dropped and the Blackhawks came out with a compete level that never showed up against the Devils. They dominated the opening ten minutes or so and got on the board first when Brandon Saad put home a rebound for his 14th of the year.

Artem Anisimov and Brent Seabrook were credited with assists on the power play goal.

McLeod hammered a couple Blackhawks with big hits, including Jonathan Toews, and then produced a good scoring chance on his first three shifts of the game. And as he brought physical pressure, the Blackhawks stopped attacking.

Filip Chytil tied the game with a nice individual effort at 13:20 and Mats Zuccarello gave the Rangers the lead four minutes later.

And after a strong start to the game, the Blackhawks went to the room trailing 2-1 after 20 minutes. Chicago had a 12-9 shot advantage in the first but didn’t produce when they had chances.

The second period was a totally different Blackhawks group than the one that started the game. There was no sustained offense, no second chances, and a lot of chasing. One goal was erased because the Rangers were offside but Chris Kreider extended the lead 13 minutes into the second.

After 40 minutes the Rangers had a 3-1 lead on the scoreboard and a 22-21 shot advantage. And the Hawks looked like a team destined for another loss.

Jeremy Colliton kept riding Patrick Kane, and why not? He’s arguably the hottest scorer in the league right now. But Kane had skated 14:17 through two periods after skating almost half the game against the Devils.

Surprisingly, Seabrook was the Hawks’ overall ice time leader after two period; he was on the ice for 16:47 through two and led the team with four shots on goal.

Chicago had six hits as a team though two periods; McLeod had four.

The Hawks got a power play to start the third period and immediately made the Rangers pay. Alex DeBrincat deposited a one-timer off a pass from Kane to bring the Blackhawks within one just 100 seconds into the final 20 minutes.

Kane’s assist was the 554th of his career, tying him with Doug Wilson for third in Blackhawks team history.

Erik Gustafsson also picked up an assist on the DeBrincat goal, his 22nd helper of the season.

It took Colliton about seven minutes into the third to roll out a line of DeBrincat-Toews-Kane at even strength and the line put together a good shift with sustained offensive zone time. Toews’ next shift had Saad back on his wing, however.

At 12:46 into the third Chris Kunitz, who dressed instead of John Hayden for unknown reasons (again), went to the box for tripping. The Hawks were able to kill the penalty but were left with five minutes left in regulation to chase a tying goal.

Chicago came out of a stoppage with the DeBrincat-Toews-Kane line with three minutes left in regulation but this time the line struggled to advance the puck into the offensive zone. The Blackhawks were struggling to get shots on net after the DeBrincat goal as the Rangers defensively locked down the neutral zone.

Collin Delia went to the bench with 1:45 left in the third and the Hawks trailing by one.

Kane tried to fire a cross-ice pass to DeBrincat that the Rangers picked off and Mika Zibanejad scored into the empty net to make the score 4-2. The game was effectively over.

But Dominik Kahun rifled a shot past Lundqvist with 1.5 seconds left to make the final score 4-3. Because someone, somewhere took the over.

Thursday night was only the third time that Dylan and Ryan Strome played against each other in their young NHL career. Both has been traded already this season; the Oilers traded Ryan to New York for Ryan Spooner on Nov. 16.

Seabrook ended the night skating 23:43 while Duncan Keith skated 24:16, the highest on the blue line.

Brendan Perlini skated only 7:30 and disappeared off the bench for the third period.