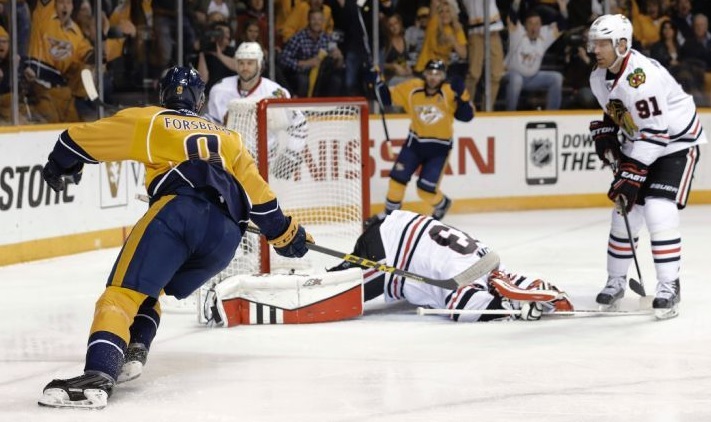 Filip Forsberg’s first career postseason hat trick was punctuated with an empty net goal with 10 seconds left in regulation and the Nashville Predators forced a Game Six on Saturday at the United Center. The script on Thursday night was unfortunately similar to the display in Game Two, as a quick blitz at the beginning of the third period blew a tie game wide open.

Brad Richards opened the scoring with his first of the postseason, but the Hawks were only able to hold the lead for 75 seconds before Forsberg scored his first of the night. Marcus Kruger won a defensive zone faceoff but Forsberg got to the puck and beat Scott Darling, who was his roommate last year.

Chicago had two power plays in the first period but both failed; the Hawks out-shot the Preds 13-10 in the opening 20 minutes but Pekka Rinne was up to the task.

The second period was scoreless, with the Hawks successfully killing a Brent Seabrook penalty. Nashville was able to gather some momentum in the middle stanza, though, out-shooting the Hawks 11-7.

When the puck dropped to open the third period, it took only one shift for the wheels to fall off.

Michal Rozsival failed to clear the puck and the Preds capitalized as James Neal scored on a wrap-around to give the Preds a lead they wouldn’t give up the rest of the way. Neal’s goal came only 47 seconds into the period, and Nashville would grab the game by the throat after the score.

With Rozsival in the box, Colin Wilson scored his fifth of the series. Wilson had 20 goals during the regular season but struggled over the final month of the season; those struggles are well in the past now, though, as he has been Nashville’s best offensive weapon throughout the series.

Only 12 seconds after Wilson’s goal, Forsberg scored his second of the game to extend the lead to 4-1. With three goals in just 3:14 to open the third period, the game was effectively over.

Forsberg’s empty net goal was a power play tally, making the Preds successful on two of three advantages in the game. The Hawks did not have a power play after their two in the opening 20 minutes.

Kris Versteeg was on the receiving end of a filthy pass from Patrick Kane and scored his first goal of the postseason with 5:08 left in regulation, but that would be the sum of the Blackhawks offense for the night.

Chicago was credited with 30 shots on net in the game, but failed to create any traffic in front of Rinne. Darling faced 28 shots and allowed four of Nashville’s five goals in the loss.

At 17:55, Marian Hossa was called for a slash on Viktor Stalberg and all hell broke loose. Andrew Shaw whacked Seth Jones after the whistle and Paul Gaustad took exception. Those two exchanged words – and a few punches – and were sent to the showers. Unfortunately for the Blackhawks, Shaw picked up the extra penalty and, with 2:05 left in regulation, any hopes for a rally were crushed.

Shaw and Gaustad picked up minor penalties for roughing 10-minute misconduct penalties on the play.

Jonathan Toews led the Blackhawks with four hits in the game, but struggled at the dot; Mike Fisher returning to the Nashville lineup certainly helped the home team in that regard. Toews won only seven of 19 faceoffs in the game.

Shaw led Chicago with six shots on net, but his 16 penalty minutes were costly. Johnny Oduya was credited with a team-high four blocked shots in the game.

Duncan Keith played almost half of the game’s first 40 minutes and finished the night skating 27:08 only two nights after he was on the ice for more than 46 minutes. Kimmo Timonen played only 8:35 in the loss and was a non-factor.

Richards added an assist to have a two-point night. Kane, Bryan Bickell and Brent Seabrook picked up assists in the loss. The assist gives Kane five points (one goal, four assists) in his first five games since returning from injury.

Game Six will begin at 7:00 pm CT at the United Center on Saturday night.