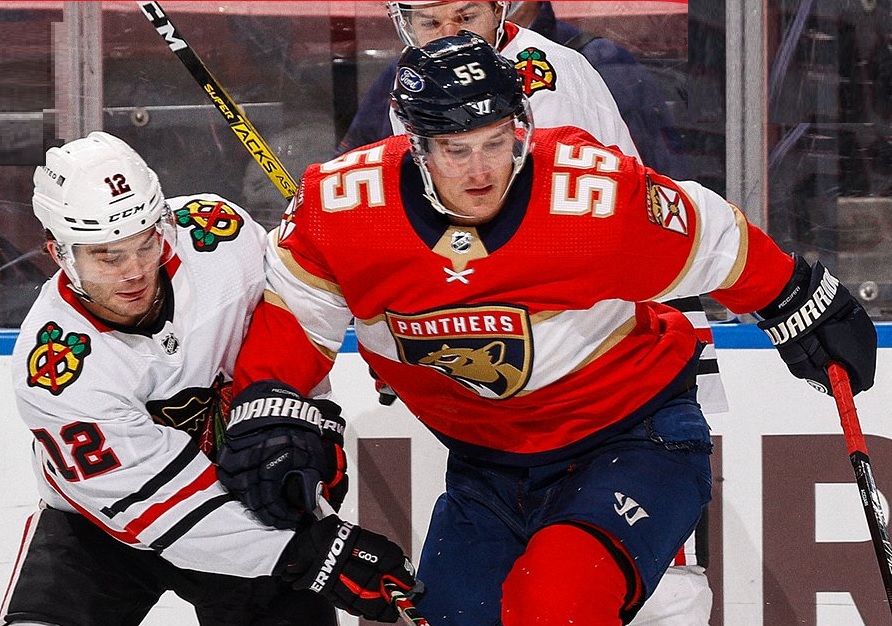 After a couple losses in Tampa that were far from pretty, Collin Delia got a second straight start between the pipes. He started well in Tampa but the second period proved to be too much for the Hawks to overcome. Five goals in both games isn’t a trend the Hawks would like to see continue.

The Blackhawks crossed the state to face a Florida Panthers team that was playing its first game of the season after their opening set with Dallas was postponed because of the COVID issues hitting the Stars.

How would the Hawks play? How would the Panthers look in their first action of the season? Would the script change for Chicago?

The opening period was much better for Chicago defensively, but generating consistent offense continued to be an issue.

It looked like the Blackhawks took the lead when Pius Suter got the puck on a breakaway and made a gorgeous pass to Patrick Kane, who made the deposit. Unfortunately, Kane was offsides on the play and the goal was taken off the board.

The Hawks were out-shot 12-5 in the period but Delia looked good. He made a few strong saves and the Hawks were able to kill a penalty 63 seconds into the opening frame when Alex DeBrincat went to the box.

After 20 minutes the score was tied at zero.

Aaron Ekblad scored an unassisted goal 12 seconds into the period to give Florida the lead. Keith Yandle scored at 5:33 to extend Florida’s lead to two and that uneasy feeling of the opposition going on a run was back.

The Blackhawks got a power play late in the period and were able to convert. DeBrincat scored to get Chicago on the board and cut the lead in half.

The assists went to Kane and Duncan Keith.

Through two periods DeBrincat had skated 16:20 already with three shots on net. He looked good and Jeremy Colliton was riding him hard.

Chicago out-shot Florida 10-7 in the second period and trailed by one heading to the third.

Ian Mitchell was the only Blackhawks defenseman without any special teams ice time through two periods, but he had more than three minutes more ice time than Adam Boqvist.

Lucas Wallmark went to the box 1:42 into the second but Florida bailed the Hawks out; Jonathan Huberdeau killed the penalty 67 seconds later when he sat for two minutes of his own.

The Blackhawks took advantage of the 4-on-4 opportunity. Connor Murphy scored four seconds into the Huberdeau penalty to tie the game.

Sadly, the tie lasted only 22 seconds. Eetu Luostarinen scored his first of the season to give Florida a 3-2 lead.

Huberdeau came out of the box and immediately made an impact. A shot that appeared to possibly have been redirected by Calvin de Haan slid through Delia into the net for a fourth Florida goal. The goal was officially credited to Patric Hornqvist with assists to Huberdeau and Radko Gudas.

Chicago allowed two goals in 3:04 after tying the game.

And, importantly, the Panthers covered their 3.5 goal over/under.

The Hawks couldn’t sustain any offense, so the two-goal lead felt like 10. Boqvist looked lost most of the night and his ice time was limited because of it.

With 3:05 left in regulation and the Blackhawks scrambling defensively (again), Huberdeau scored a power play goal to make it three games of five goals against to start the season. The goal came eight seconds into a Ryan Carpenter penalty.

Chicago had killed all three penalties to that point. Maybe staying out of the box would be a good scheme in the next game? Four power plays is too many with this roster.

The final three minutes painlessly came off the clock without a decent scoring chance for the Blackhawks.

Delia was on the worst end of the stat sheet but it largely wasn’t his fault. The Blackhawks continue searching for chemistry on the ice and their defensive coverage is paying for it.

Matthew Highmore was limited to 6:27 and may be the odd man out when Carl Soderberg is able to join the team.