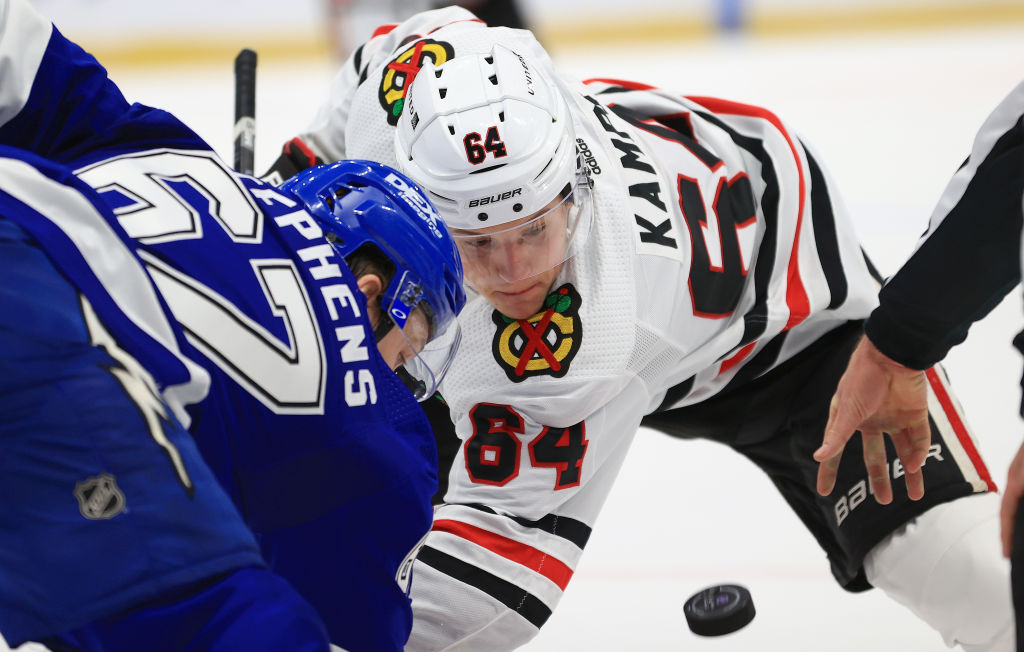 After a rough season opening loss in Tampa, the Blackhawks decided to make a few changes. Philipp Kurashev made his NHL debut and Collin Delia made the start between the pipes.

The insertion of Kurashev means Brandon Pirri was a healthy scratch. It also meant Jeremy Colliton had already dusted off the ol’ blender and was ready to mix things up right from the jump.

The lines to start the game were:

Yup, Pius Suter as your top line center and Dylan Strome, who scored Chicago’s only goal on Wednesday, with Dominik “Please let me skate, coach?” Kubalik and the rookie Kurashev.

Tyler Johnson and Luke Schenn, who had missed the opening game because of salary cap issues for Tampa, were back in the lineup for the Bolts.

Chicago played its best 20 minutes of the young season to start the night. Delia made a few big saves and the Hawks did a nice job killing a penalty to keep the game tied at zero after one period. Chicago had a 13-10 shot advantage after one.

#Blackhawks second line of Kubalik-Strome-Kurashev at 5-on-5 in first period, per @NatStatTrick:

Ian Mitchell blocked one shot in 5:07 in the first – all at even strength.

A little more than two minutes into the second period Delia went full Trubisky, misplaying a puck behind the net and then losing his feet only to watch Ondrej Palat put the loose puck into the back of the net to give Tampa a 1-0 lead.

Less than 2:20 later the Blackhawks were scrambling yet again and Alex Killorn was able to snap home a shot to extend Tampa’s lead to 2-0.

And that familiar feeling of the wheels falling off was present once again.

Blake Coleman added a third goal at 8:11 into the second and you could smell the stink from Chicago.

Colliton challenged that there was goaltender interference on the play – which there clearly wasn’t – and, when he lost the challenge, put his team short-handed chasing three with Tampa eating them for dinner.

After the penalty ended, Colliton went to his “nuclear” option (which is more like a firecracker at this point if we’re honest) and put Strome back with Kane and DeBrincat. Because, you know, why not.

Chicago got their first power play of the night late in the first period and made it count. Strome set up DeBrincat beautifully and he made the deposit, cutting Tampa’s lead back down to two.

Less than two minutes after DeBrincat scored, he picked up an assist. Patrick Kane got on the board for the first time in the new season and suddenly the score was 3-2.

Chicago then got a power play when Killorn clipped Andrew Shaw’s head with his shoulder. The Hawks got a couple good looks in the closing seconds of the middle period but couldn’t convert. However, 1:23 of the advantage carried over to the third period.

At the end of the second period, Mitchell found himself in Colliton’s doghouse. The rookie was minus-two and had skated only 8:17, the lowest ice time on the blue line by far.

Kubalik also disappeared in the second period. He went from heavy use in the first period to barely three minutes of ice time in the second; he had skated just 8:39 after 40 minutes.

Strome was having a strong night through two periods. He picked up an assist on DeBrincat’s goal and won five of seven faceoffs. Strome also led the Blackhawks with five shots on net.

The Hawks’ power play came to an end early in the third without them scoring; Tampa had the better scoring chance while short-handed. Chicago got another power play opportunity 32 seconds after the previous one ended when Brayden Point gave David Kampf a hug while pursuing the puck.

That penalty ended without much from the Hawks’ offense again.

Of course the next penalty would be on the Blackhawks.

Nine minutes into the third period, after an extended period with the puck in the Hawks’ defensive zone that saw Tampa manage almost a full change while keeping possession, Kampf got caught hooking and went to the box.

Chicago kept hanging around but weren’t generating nearly as many chances as they did late in the second period. Eventually – predictably – the Lightning were able to take advantage. Tampa got an odd man rush at 13:30 into the third and Yanni Gourde scored to extend the lead back to two.

Gourde, Coleman and Barclay Goodrow had two points each after the Gourde marker.

With 5:20 left in regulation, Shaw was able to draw another penalty and give his team an important advantage.

The Blackhawks did nothing on the power play again.

After the flat power play ended, Tampa got another rush and Steven Stamkos unloaded another goal-scoring snipe to make the score 5-2. Stamkos now has five points in two games.

And for the second time in as many games the Blackhawks allowed five goals.

That’s where the night’s scoring would end.

Though the Hawks allowed five again, 30 of the first 40 minutes felt a lot better. Delia’s turnover that turned into a goal became three goals in roughly six minutes but the Hawks battled back and made it a game by the end of the middle stanza.

Kubalik got heavy run in the third period and finished skating 16:09 with three shots on net.

After leading the team with five shots in the first two periods, Strome was limited in the third and didn’t register another shot on net.

Kurashev skated 14:05 with two shots on net in his debut.