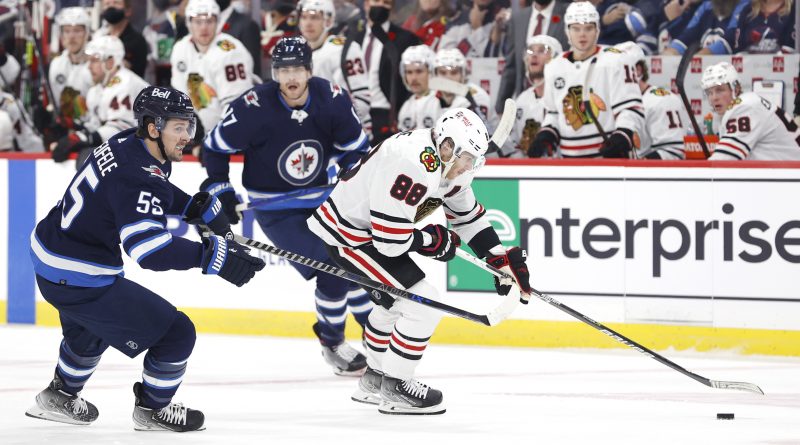 After Wednesday night’s loss to Carolina — in which the Blackhawks blew a 3-1 lead — it appeared Chicago head coach Jeremy Colliton was nearing his breaking point. He was as angry as he has been since taking over as the Hawks’ coach, emphasizing the team’s approach. Ben Pope at the Chicago Sun-Times wrote a good piece on Collton’s comments, in which he quote the Hawks’ coach.

“It’s just another hard lesson, but I would like us to stop learning hard lessons and respond with a change in how we think about the game,” Colliton said in the Pope article.

In his comments, Colliton called out players in vague ways (remember: he’s allegedly a great communicator) but would confirm he hasn’t been thrilled with Dylan Strome’s play this season. He also alluded to the decision making of defensemen Erik Gustafsson and Jake McCabe.

The Blackhawks headed to Canada without Riley Stillman and Juhjar Khiara, both of whom recently cleared COVID protocol but weren’t allowed to travel with the team into our neighboring country to the north.

After their coach put them on blast with the media, how would the Blackhawks respond on the road in Winnipeg? It took the Jets 47 seconds to score.

Yeah, the Blackhawks’ penalty kill was decent in the first period. But Winnipeg’s second goal, scored by Neal Pionk, was a power play marker. And even though the analytics will tell you the Blackhawks out-chanced the Jets, Winnipeg’s chances were in more dangerous areas and they converted their opportunities.

After 20 minutes, the Blackhawks had out-shot the Jets 9-7 but were chasing two goals.

The only Blackhawks skater to win a faceoff in the first period was Jonathan Toews.

Chicago needed to bounce back, and it appeared they started the second period well. Ryan Carpenter, playing with the first power play unit, appeared to tip the puck into the net on a rebound as the advantage was coming to an end early in the second. But Winnipeg challenged that the Blackhawks were offside earlier in the play. The video review clearly showed the Hawks were, and the goal was taken off the board.

Following the goal being wiped away, the Blackhawks were as flat as the ice surface they were skating on. Dominic Toninato extended the lead to three at 13:48 and Kyle Connor made it four 89 seconds later.

After 40 minutes, the Jets were out-shooting the Blackhawks 18-14 and had a 4-0 lead. Chicago was credited with five shots on net in the second period. Toews won 10 of 14 faceoffs in the first two periods; the rest of the lineup won four of 20 at the dot.

If there was ever game tape that would lead one to believe the team has quit on its coach, the first two periods are it.

At this point, the bon fire my neighbor was building started sounding way better than the dumpster fire on the ice that I was watching on television. Cigars, bourbon and an outdoor fire? But I felt sickly compelled to see how the third period would play out before wandering over to drown a couple hours with some fuego.

And I’m glad I hung around. Less than one minute into the third period while killing a penalty, Kirby Dach got the puck to Seth Jones who carried the puck around behind the net and dished it to MacKenzie Entwistle who made the deposit to get Chicago on the board.

Entwistle’s short-handed goal came with assists from Jones and Dach at 56 seconds.

The next goal could have been significant… if the Blackhawks had scored it, quickly, after their first. Chicago didn’t score the next goal; Winnipeg’s Nikolaj Ehlers pushed the lead back to four at 14:03 into the third.

There was no emotion from the Blackhawks. No push back. Zero physicality. They got on the board and then spent 19 minutes going through the motions.

The Jets out-shot the Blackhawks 15-3 in the third period. The “effort” was pathetic.

Entwistle was noticeable in the third period, which means he’ll likely have to fight Strome for ice time when Khiara is ready/able to return to the lineup. Colliton continues to throw grenades on the ice with ineffective line combinations and expects to have any offense come from it.

The Blackhawks (1-9-2) will look for their second win in their 13th game of the season on home ice Sunday against Nashville.

31 thoughts on “Flat, Awful Blackhawks Blown Out By Jets”