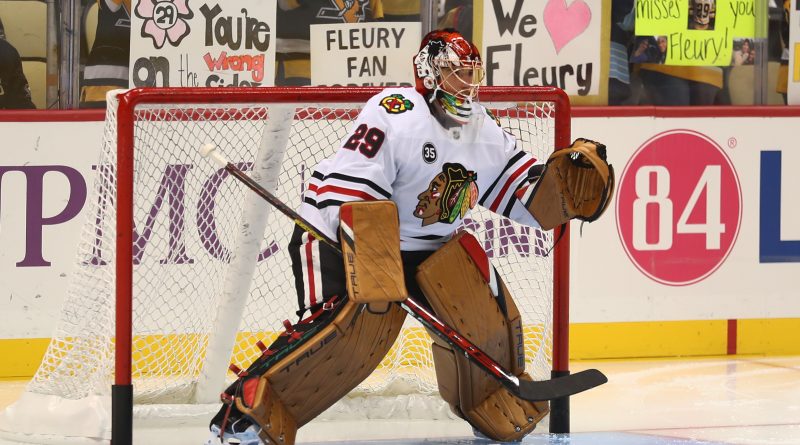 Game One: in Denver, the Blackhawks get out-scored 3-1 in the first period. After the game, head coach Jeremy Colliton emphatically tells the media the Blackhawks are going to start better/faster.

Game Two: in New Jersey, the Blackhawks give up the first goal of the game 17 seconds into the first period.

So how did the Hawks respond in their third game of the season?

That that point, rather than burning his timeout as he did after the Avs took a 3-0 lead on Wednesday night, Colliton pulled Marc-André Fleury in Pittsburgh, replacing him with Kevin Lankinen. Fleury allowed four of ten shots he faced in the net and will likely need a new stick after destroying his in the tunnel after getting the hook.

When the final horn of the first period sounded (40 seconds prematurely because of a glass issue), the Blackhawks were out-shot 13-3.

The Blackhawks were credited with three shots on net and allowed four goals.

If the Hawks’ front office is looking for their “great communicator” to motivate the troops, it’s getting worse. Through three first periods to start the season, the Blackhawks have been out-scored 8-1.

One adjustment Colliton did make in the first period was rolling with lines that someone tweeted more than two weeks ago. To start the game, the Blackhawks lined up with the following:

Those lines lasted one period and then Colliton put them back in the blender. Because we’re trying to find chemistry on the ice early in the season. The players are still learning each others’ tendencies… so why spend more than one period with a line intact?

At 4:51 into the second, Zach Aston-Reese went to the box and the Blackhawks immediately took advantage. Patrick Kane sniped home his first of the season nine seconds into the advantage to cut Pittsburgh’s lead to three.

Alex DeBrincat and Seth Jones picked up the helpers on Kane’s goal.

At 15:18, Brian Boyle went off for a double-minor when a high stick caught Riley Stillman. However, Juhjar Khaira went to the box as well so the Blackhawks ended up with a two-minute power play as Dominik Simon served one of the two Boyle penalties.

Jason Zucker deposited a short-handed rebound at 17:55 into the second to give Pittsburgh a 5-1 lead.

The second period expired with the Penguins holding the same four-goal margin they had after the first, which was unfortunate because the Blackhawks carried a lot more of the action in the middle stanza than they had in the first. Chicago out-shot Pittsburgh 15-8 in the second but only got one through Tristan Jarry.

Looking for a spark, Colliton’s three forwards on the ice to start the third period were Kubalik, Toews and Khaira.

While slotting a fourth-ling grinder with Toews and Kubalik isn’t ideal to improve the scoring chances, neither team wanted this game to go much longer than it needed to based on their play in the first half of the third period. The fourth shot of the period came with 7:32 left in the third, which led to only the third faceoffs of the period. The two teams skated up and down the ice for around 12 minutes without a whistle.

Like those watching at home, the players couldn’t wait for the game to end.

With four minutes left in regulation, Kane, Brandon Hagel and Dach executed a pretty passing sequence that concluded with Dach scoring his second goal in as many nights. Kane picked up his second point of the night, and the Blackhawks were within three.

Dach’s goal would be the final marker of the evening and the Blackhawks head home to face an Eastern Conference favorite, the New York Islanders, in their home opener on Tuesday night with an 0-2-1 record.

To say the first three games were a disappointment would be a massive understatement. And Colliton’s job security should be in question as the team heads home.

Toews won eight of 13 faceoffs. Dach won five of nine. Johnson won all three of his draws in the game.

Jones blocked three shots and was credited with one assist in 22:50. Jones and Kane (20:02) were the only skaters to be on the ice for more than 20 minutes in the game.

Khaira led the Hawks with six hits. Kubalik, Riley Stillman and MacKenzie Entwistle were credited with five hits each.

As an aside, Brian Campbell was behind the bench for the IceHogs against the Wolves on Saturday night. He would be a massive upgrade in Chicago, coaching the Blackhawks’ defensemen. But there are bigger issues (read: Colliton) that need to be dealt with; firing Sheldon Brookbank as a scapegoat for the early play would be weak.