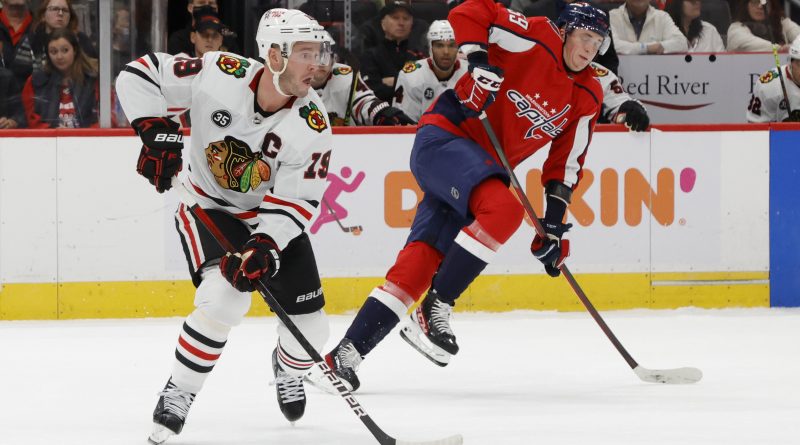 The Blackhawks went to Washington on Thursday night with a fresh face — Josiah Slavin — making his NHL debut.

One area of the game worth watching was the faceoff circle. The Blackhawks entered the game ranked 22nd overall in the NHL as a team (48.1 percent). Washington came into the game ranked 29th out of 32 teams, winning just 46.9 percent of their faceoffs.

The opening 20 minutes were about even for most of the period. With a stoppage with about 90 seconds left in the period for a neutral zone faceoff, Hawks coach Derek King sent Kirby Dach over the boards with Alex DeBrincat to join Patrick Kane, who was getting a doubleshift (surprise!) opportunity. That mix paid off Seth Jones triggered a 2-on-1 for Kane and DeBrincat that ended with DeBrincat’s 13th goal of the season.

Kane and Jones were credited with the assists at exactly 19 minutes into the game.

Marc-André Fleury stopped all eight shots he faced in the first period and the Blackhawks put nine on net, including DeBrincat’s goal to take a 1-0 lead to the room.

Nic Dowd tied the game at 1:10 into the second, and Washington had the momentum.

Washington was credited with the first eight shots of the second period but Fleury was able to hang on for dear life and keep the game tied. Chicago hung around long enough that they just needed a good look and finally got one almost 13 minutes into the period. We had a celebrity guest appearance from Dominik Kubalik!

The assists on Kubalik’s goal went to Dach and DeBrincat.

Chicago’s lead lasted almost five minutes this time. Ovechkin unloaded on a shot that Fleury somehow stopped but Evgeny Kuznetsov was able to tap it home to even the game at two.

When the dust settled after two periods, the score was tied at two. After Chicago out-shot Washington 9-8 in the first period, the Caps held a 9-8 shot advantage in the second. So everything on the board was tied after 40 minutes of hockey.

With Murphy out of the lineup, Seth Jones skated 9:20… in the second period. He was at 17:30 after two periods and Jake McCabe was already up to 16:46 with Caleb Jones and Wyatt Kalynuk in the lineup.

The Blackhawks started the third period with 50 seconds of power play time as Garnet Hathaway went to the box for elbowing Erik Gustafsson late in the second. Unfortunately for the Blackhawks, a turnover as Hathaway left the box turned into an easy breakaway with Dowd finding Hathaway, who scored to give the Caps a 3-2 lead 57 seconds into the third.

With a shade over eight minutes left in regulation, Slavin set up Seth Jones for a missile to tie the game at three.

Slavin’s first career assist was collected from the back of the net by Erik Gustafsson as a trophy for the young forward from his NHL debut.

After the goal the game was a sloppy track meet. The teams skated up and down with bodies flying all over the ice, pucks missing the net, ugly saves and passes going anywhere but the tape. Fleury was all over the place trying to keep the game tied, which he successfully did for the remainder of regulation.

Chicago out-shot Washington 26-25 in regulation. Each side scored three times. And we headed to overtime with Seth Jones at 27 minutes of ice time.

Jones had a chance to win it early in overtime on the shooting end of a 2-on-1 with DeBrincat but his shot was deflected into the netting.

Neither side got a shot on net in the closing half minute and we went to a skills competition. Fleury stopped 25 of 28 in 65 minutes of hockey. His teammates also put 28 shots on net.

Appropriately, Evgeny Kuznetsov hit the post to start the shootout. Toews was denied on his shot attempt.

Ovechkin was up third for Washington. Fleury denied his long-time rival and the Blackhawks escaped with their first win in Washington DC since January of 2006.