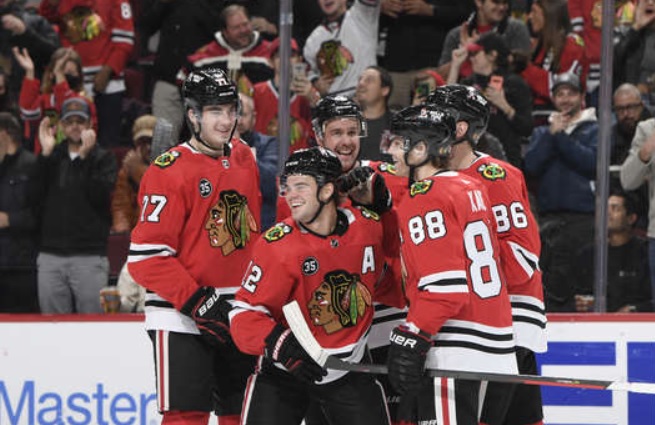 Editor’s Note: Thanks to everyone who came out to the watch party/book signing at Orange & Brew Bottle Shop and Tap Room in Downers Grove on Wednesday night. The crowd was great — we’ll definitely do something there again!

The Blackhawks hadn’t blown a third period lead yet this season. On Wednesday night, they checked that box.

Chicago took a 3-2 lead into the final 20 minutes but couldn’t stop the Carolina rally. Marc-André Fleury had his best performance of the season on Monday, but this one was far from that; he’d probably like at least two (if not all four) of the Canes’ goals back.

If you’re looking for a silver lining in another loss for the Blackhawks, the offense was there. Chicago took a two-goal lead in the second period thanks to their two best offensive players — Alex DeBrincat and Patrick Kane — once again leading the offense.

DeBrincat’s fifth of the year opened the scoring 95 seconds into the game. The first period lead lasted less than five minutes, however.

Kane’s fifth goal of the season gave the Blackhawks a lead early in the second period. Riley Stillman picked up an assist on the goal in his return to the lineup; MacKenzie Entwistle was also credited with a helper.

DeBrincat’s team-leading sixth goal of the young season gave fans some hope that the Hawks were going to actually hang with the undefeated Canes. And, for 40 minutes, they did. Seth Jarvis’ first goal cut the lead to one late in the second but the Blackhawks actually looked pretty good.

That all fell apart in the opening four minutes of the third period. Carolina tied the game 17 seconds into the third and took the lead at 3:26 into the final frame.

To their credit, the Blackhawks didn’t fold. They out-shot the Canes 12-7 in the third period and tried to push back but couldn’t score again.

Jeremy Colliton continues to rely heavily on his veterans. Too heavily.

Jonathan Toews won 13 of 24 faceoffs and skated 20:52. No other Hawks’ skater took more than nine faceoffs in the game; Juhjar Khiara won five of nine and Philipp Kurashev won five of eight.

In his second game back from COVID protocol, Kane led the Blackhawks with eight shots on net — but it took him 25:01 on the ice to get there. He looks refreshed and physically much better than he did before he was placed in protocol, but those minutes are going to add up down the road this season if Colliton keeps rolling him out there every other shift.

18 thoughts on “Fleury, Blackhawks Find A Way To Lose”