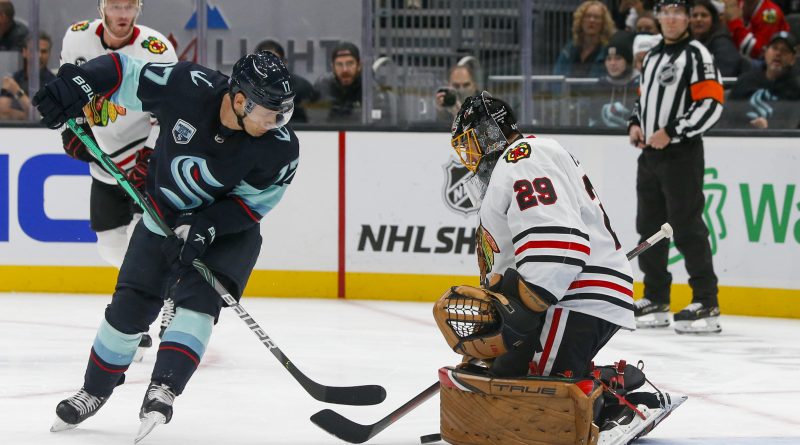 After what felt like a month away from game action, the Hawks were busy before the game. The team announced two coaching moves: Marc Crawford was named associate coach and announced Rob Cookson has joined the NHL coaching staff as an assistant coach.

The roster got a few tweaks as well. Defenseman Caleb Jones was activated for the first time in the regular season, but forward Tyler Johnson replaced him on LTIR. Brandon Hagel took the morning skate but wasn’t active for the game; Caleb Jones joined his brother, Seth, in the lineup. Chicago rolled with seven defenseman, scratching Adam Gaudette in favor of Caleb Jones.

With all of that as a backdrop, the Blackhawks played a stellar first period against a Kraken team that simply refused to generate any offense. It took 15 minutes for the Hawks to get on the board, but Seth Jones’ 300th career point opened the scoring.

Alex DeBrincat was flying in the first period and picked up one of the assists on Jones’ goal. Patrick Kane was credited with the second helper.

After 20 minutes, Marc-André Fleury may have been bored. He only needed to make three saves in the opening 20 minutes; the Hawks put eight shots on net.

The good news: Seattle has not yet won a game when trailing after the first period. And the Blackhawks did everything right in the first. However, if the first period was a snooze for Fleury, the second was the polar opposite.

The Blackhawks grabbed a 2-0 lead two minutes into the second when Kirby Dach hit DeBrincat with a nice stretch pass and the Cat scored a beautiful goal.

BY THE POWER OF FLOWER pic.twitter.com/sXpZbFpIwT

An interesting stat after 40 minutes: Dach had taken 13 faceoffs (winning only three). The rest of the Blackhawks took only 12 faceoffs, led by Jonathan Toews (who won three of six). The Hawks’ top line of DeBrincat-Dach-Kane was dynamite, but Dach’s struggles at the dot made it surprising that he had taken more than half of the team’s total faceoffs.

Zero penalties were called in the first two periods and the Hawks’ trend of going extended stretches of time without a whistle appeared again. The teams went more than nine minutes without a whistle in the second period.

Vince Dunn did the Blackhawks a favor at the expense of Dach’s face, punching the Hawks’ young center in the face and getting sent to the box for the game’s first penalty 1:20 into the third period.

On the power play, Yanni Gourde took a few cheap shots at DeBrincat. Seth Jones whacked Gourde after he took a shot at Kane and then DeBrincat lost it. He dropped the gloves with Gourde who appeared to laugh as the fight started. He wasn’t laughing as much when DeBrincat kicked his ass, landing a series of punches before the fight was broken up.

YANNI VS THE CAT. NO ONE SAW THIS ONE COMING. pic.twitter.com/57YJrSKoUb

Jones picked up an extra penalty for hitting Gourde before the fight broke out. So we went to 4-on-4 and, clearly, Seattle was trying to ramp up the physical play to change the momentum.

With the fight, DeBrincat added a Gordie Howe hat trick to his resume for the year.

And quickly after the Blackhawks’ penalty ended, Kane extended the lead to three.

Philipp Kurashev received a nice outlet pass from Connor Murphy and set Kane up for the goal; they picked up the two assists on Kane’s sixth of the year.

The Blackhawks went back to shutting down the Seattle offense until Dach went to the box for slashing with 7:22 left in regulation. The Kraken had converted only one of their first 23 power plays to start the season on home ice before Dach took a seat in the sin bin. So — of course — with 17 seconds left in the advantage Seattle scored in the midst of a scramble in front of the net. Jared McCann scored the goal.

After the power play goal, Seattle had momentum and kept the pressure on. The Blackhawks were doing a good job blocking shots, but they weren’t able to generate or sustain any offense. With 3:40 left in regulation, Philipp Grubauer went to the bench for an extra attacker. Fleury made another tremendous save (with a little help from Calvin de Haan) about 30 seconds after Grubauer left the ice.

With 1:49 left in regulation, Dunn set up Gourde who unloaded a one-timer and the Kraken were within one. Fleury was under fire and the Blackhawks’ offense was seemingly put away for the night. At the time of the Gourde goal, Seattle was out-shooting the Blackhawks 14-4 in the third.

The Hawks were happy to just get the puck out of the defensive zone, desperate to get changes as frequently as they could. Thankfully, Jake McCabe launched a clearing shot that found the back of the empty net to push the lead back to two (and get the over on 5.5) in the closing seconds.

The Chicago Blackhawks have not lost or trailed since firing Jeremy Colliton.

Fleury stopped 31 of 33 in the game (after facing only three in the first period). He was outstanding.

The Hawks blocked 22 shots as a team, led by four by de Haan.

All seven Blackhawks defensemen were credited with one shot on net. DeBrincat led the Hawks with four shots in the game.