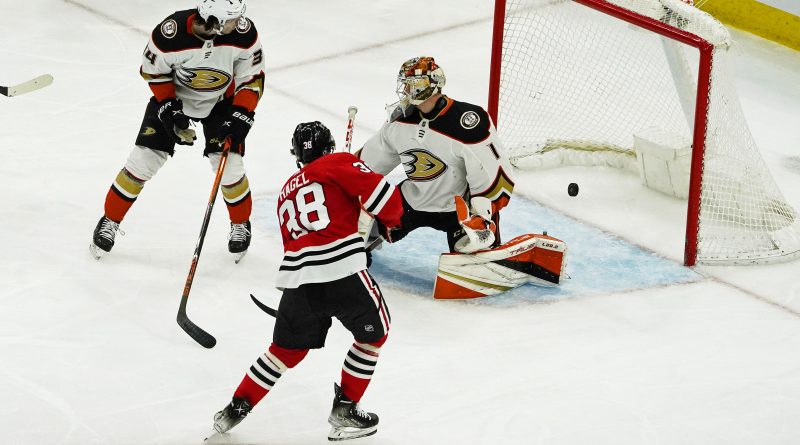 After winning three straight games, the Blackhawks welcomed the Anaheim Ducks to the United Center on Saturday evening. In net for the Ducks was Lukas Dostal, who would make just his second career NHL start; he came into the Ducks’ blowout loss against the Wild on Friday night in relief.

The Blackhawks had shown flashes of better offense lately, and the defense had played pretty well despite not having Seth Jones of Jake McCabe available. However, coming off a big loss the previous night you knew the Ducks would want some level of redemption.

Dostal and Marc-André Fleury needed to be on their games in the first period because the shots were coming frequently at either end of the ice. The Blackhawks had some great chances, but Dostal was terrific for Anaheim. Neither team was able to get on the board in the first period even though the Hawks put 15 shots on net and the Ducks were credited with 11 at Fleury.

Early in the second period, Sam Steel collided with Fleury and made little attempt to get off Chicago’s netminder. When Fleury was able to control the puck moments later, Erik Gustafsson jumped on Steel and let him know the Hawks didn’t appreciate his effort to get in Fleury’s way. The only penalty called was two minutes for roughing on Gustafsson, but that penalty opened the door for one of the wildest sequences of the season for the Blackhawks.

Chicago killed off the penalty, but it wasn’t easy or pretty. Jakub Galvas saved a goal; he took a puck off the goal line and was able to get it out of the danger area. As the penalty was coming to a close, Riley Stillman cleared the puck perfectly up the boards to where a flying Gustafsson was able to retrieve it and start an attack. Gus patiently waited for Brandon Hagel to join him and set his teammate up for a beautiful snipe.

Stillman and Gustafsson picked up the assists but Galvas saving a goal was huge.

The Ducks out-shot the Hawks 14-12 in the second period and, once again, both goaltenders were exceptional. Dostal was really impressive for a 21-year-old who had four NHL periods on his resume before the night.

An old friend, Kevin Shattenkirk, gave the Blackhawks a power play almost four minutes into the third period and Chicago was able to take advantage. A mess in the Hawks’ defensive zone turned into a rush that ultimately concluded with pretty passing sequence, climaxed by Alex DeBrincat setting up Patrick Kane.

Kane’s goal extended the Blackhawks’ lead to two. The shot totals kept climbing, but Chicago’s defense was doing a good job of limiting the Ducks’ chances. Jonathan Toews, who had some really good looks either get blocked or saved by Dostal, picked up the second assist on Kane’s power play marker.

Anaheim pulled Dostal with four minutes left in regulation because of the two-goal deficit. He was their best player in the game, but he can’t score goals for them so they asked for an extra attacker.

DeBrincat made a nice play to capture a cleared puck and was able to feed Dominik Kubalik who scored to extend the lead to three with 3:21 left in regulation. DeBrincat came into the game with seven assists on the season but added two in the game. Calvin de Haan picked up the second assist.

Fleury was magnificent. He stopped all 37 shots he faced to earn another shutout — the 70th in his Hall of Fame career.

Galvas was impressive once again. He skated 17 minutes with two shots on net and one block in the game.

Stillman had another really good game. In addition to his one assist, he as credited with one shot on net, two hits and one takeaway. His play continues to get better. He was named the number three star of the game.

Sam Lafferty won half of his eight faceoffs, put four shots on net and was credited with picked up three hits. He had a nice night.