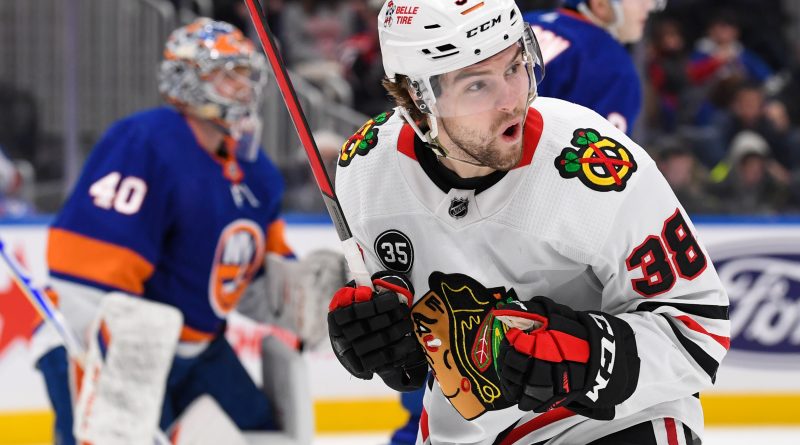 Sunday night the Chicago Blackhawks visited the beautiful, new UBS Arena to face the New York Islanders in their new barn. The game was a bit of a homecoming for Derek King, who spent more than a couple years wearing the Islanders’ sweater.

Blackhawks fans are painfully aware of the debacle this season has been for our team, but the Islanders have been the biggest disappointment in the NHL this season. They started this year with legit Stanley Cup aspirations and the excitement surrounding the opening of their new arena, but came into Sunday night’s game with a 5-10-4 record and in dead last place in the Metropolitan Division.

The Islanders came in one of the teams on the incredibly short list that are worse than the Blackhawks offensively this year. So this figured to be a strong game to bet the under.

Chicago might want their special teams to help the team at some point this month; it didn’t much in November, especially the “power” play. On Sunday, the Hawks got the first advantage of the night when Scott Mayfield was sent off for hooking Brandon Hagel.

On the power play, Hagel put himself in the right spot to make an impact and allowed an Alex DeBrincat shot to glance off his body and into the net for the game’s first goal.

After that goal, the game became increasingly physical but the offense predictably didn’t do much for either team. The Blackhawks out-shot the Islanders 10-8 in the first period and took a 1-0 lead to the room.

The second period saw more physical play, and a line to the penalty box. Chicago was caught with too many men early in the second and the subsequent penalty kill failed; Jean-Gabriel Pageau tied the game at one 8:03 into the second.

Moments after the Pageau goal, Cal Clutterbuck took a run at Jonathan Toews and tried to take the head off Chicago’s captain. Riley Stillman took exception and went after Clutterbuck, resulting in a scrum and only Stillman serving two minutes for his actions. There were a couple more penalties in the period but very few shots. The Islanders out-shot the Hawks 7-4 in the second period and the game was tied going to the third.

For a couple teams trying to get a second goal on a nightly basis, this game starting the third tied at one felt very much on-brand, but also stressful knowing the next goal could easily win the game.

That next goal game off the stick of Dylan Strome at six minutes into the third.

Erik Gustafsson and DeBrincat picked up the helpers on Strome’s second of the year.

Marc-André Fleury wasn’t being tested as frequently as he has been on some nights this season, but he was all over the ice. He aggressively played the puck well out of his crease early in the first period and had a few flopping saves in the second and third period to keep the game in line.

Semyon Varlamov went to the bench for the Islanders with about 90 seconds left in regulation and his team still chasing one. There were a few wild sequences in the moments before Varlamov left the ice with really good chances on both ends of the ice. The Islanders had the momentum running when their netminder left the ice so King used his timeout with 58 seconds left in regulation, trying to calm his squad down in the final minute with a one-goal lead.

With 2.3 seconds left on the clock and Anders Lee parked in front of Fleury, Noah Dobson unloaded a shot that got past Chicago’s goaltender and the game was tied.

Free hockey was on tap despite the Blackhawks holding a lead into the final three seconds of regulation.

Both sides had 24 shots on net in regulation. The Islanders’ last win came on Nov. 6. The Blackhawks desperately needed a second point to finish the trip to New York at .500.

The Islanders won the opening faceoff of overtime and skated in a circle for a full 75 seconds without even attempting a shot on net. A turnover allowed the Hawks’ the opportunity to change their skaters and try to get some offense working after a wasted minute by the Islanders.

After one rush by the Hawks, the Islanders got the puck back and continued to make absolutely no effort to score whatsoever. They didn’t attempt a shot on net despite having the puck for most of the first four minutes of the overtime period. After the full OT, there was a total of one (1) shot on net, by the Blackhawks. It didn’t go it, so we headed to the shootout.

Oliver Wahlstrom was up first for the Islanders and got nothing. Varlamov stopped Toews.

Mathew Barzal was up second for the Islanders. He was denied by Fleury. Kane sniped home a goal and Fleury needed one more stop for the win.

Anthony Beauvillier shot third for the Isles and he, too, was denied.

The Blackhawks escaped with a shootout victory in their first game ever at UBS Arena.

Ian Mitchell was back in the lineup after skating 16:09 on Saturday night and played a nice game once again. He skated 18:38 on Sunday night and did a nice job again. He was a secondary penalty killer on this night but moved the puck well.

Seth Jones (four) and Gustafsson (three) were the only Blackhawks skaters with more than two shots on net in the game.