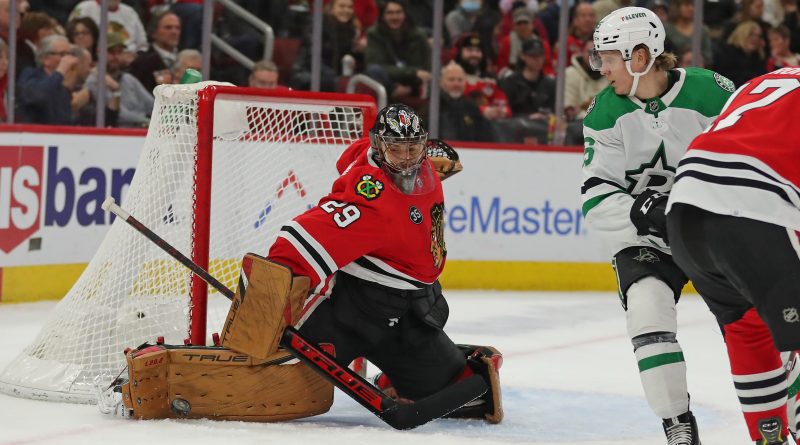 Lukas Reichel was recalled before Friday night’s game against the Dallas Stars and immediately inserted into the starting lineup. Henrik Borgstrom and Alec Regula joined him in the lineup and Marc-André Fleury was between the pipes.

If you weren’t in your seat during the first period, you might have missed it. The Blackhawks out-shot the Stars 11-9 in a period that took 26 real-time minutes! There were only seven stoppages in the entire first period. Chicago was credited with nine blocked shots in the opening 20 minutes and both teams killed a penalty in the first.

Calvin de Haan took a seat inside the first two minutes of the second period but that penalty was killed off as well.

Fleury was stealing goals like kisses on Valentine’ Day. He had at least four highlight reel saves by the end of the second period with perhaps the most impressive coming inside the final five seconds of the period.

The second period took a little longer than the first in real time, but the results were the same. Chicago out-shot Dallas 11-9 again in the second. Neither team scored and both had a power play in the frame.

Through two periods, Reichel had one shot on net and had won three of four faceoffs; Kirby Dach, meanwhile, had only taken — and lost — one faceoff. Sam Lafferty was taking draws on Dach’s line; he won four of eight in the opening 40 minutes.

The Stars out-shot the Blackhawks 9-7 in the third period. Chicago had to kill a penalty in the third, but they did that. And, once again, neither team scored.

So we went to overtime.

In the bonus session, Dallas out-shot the Hawks 5-2… but neither team scored. Again. And — again — Fleury was magnificent. He stopped all 29 shots he faced in regulation and overtime.

So we went to the skills competition to decide the game. Jason Robertson and Alex DeBrincat scored in the first round of the shootout but then neither side was able to score until the sixth round, where Jacob Peterson won the game. Unfortunately, Fleury’s terrific night was wasted on a shutout loss.

Reichel skated 17:41 with two shots on net and one takeaway while winning four of seven faceoffs. He was called on third in the shootout by coach Derek King, but couldn’t convert.

Regula had one hit and two takeaways in 11:54. Both rookies saw action on the power play (Reichel 29 seconds, Regula 33).

43 thoughts on “Fleury Dominant, Offense A No-Show As Blackhawks Fall To Stars In Shootout”