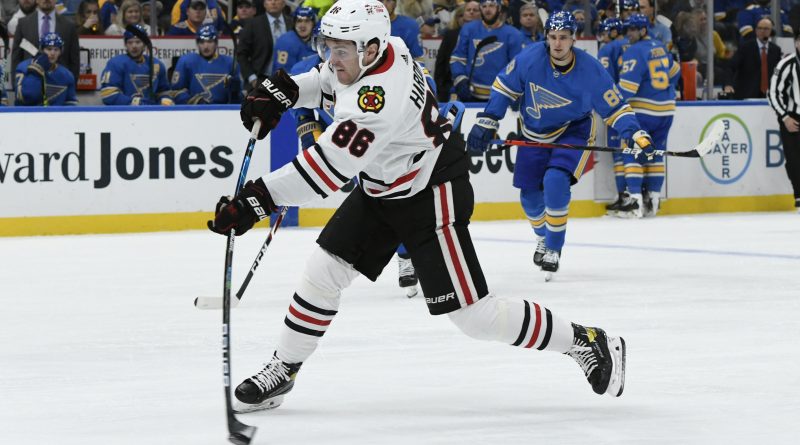 After getting thoroughly crushed in Carolina on Friday night, the Blackhawks made the trip to St. Louis for a Saturday night affair. The Blackhawks came into the game against their division rival without a win yet.

Marc-André Fleury got the call in net and had without question his best game of the season. As the Blackhawks were out-shot 14-4 (yes, four shots) in the first period, Fleury made a few huge saves to keep the doughnuts on the scoreboard. He remained hot in the second period, which saw his teammates put more shots on net but still sustain absolutely nothing offensively.

Through 40 minutes, the Blackhawks were getting out-shot 29-16. No goals were on the scoreboard, but Blues fans had to feel more comfortable about their team’s ability to break through; Fleury was tremendous, the Blackhawks were competing but there was almost no offense to speak of from Chicago.

A struggling team hanging around can use any help they can get, but the Blackhawks refused to help themselves. Calvin de Haan and Alex DeBrincat went to the box inside the first six minutes of the second period and, the second power play paid off. Torey Krug sniped home the game’s first goal 7:25 into the third.

DeBrincat was in the box because his stick got caught in Brayden Schenn’s skate. Cat was called for tripping but the concern for St. Louis was Schenn, who labored to get to the bench and went straight to the room. He did return after the power play goal gave the Blues a 1-0 lead.

Fleury went to the bench with 95 seconds left in regulation and his team still chasing one. Not surprisingly, the Blackhawks struggled to get a shot on net. Jeremy Colliton called his timeout with 31.5 seconds on the clock after the Blues iced the puck, hoping to draw something up that worked with the extra attacker on the ice.

The Blackhawks didn’t get a good shot off with the empty net and Jordan Binnington earned one of the easiest 1-0 shutouts of his career.