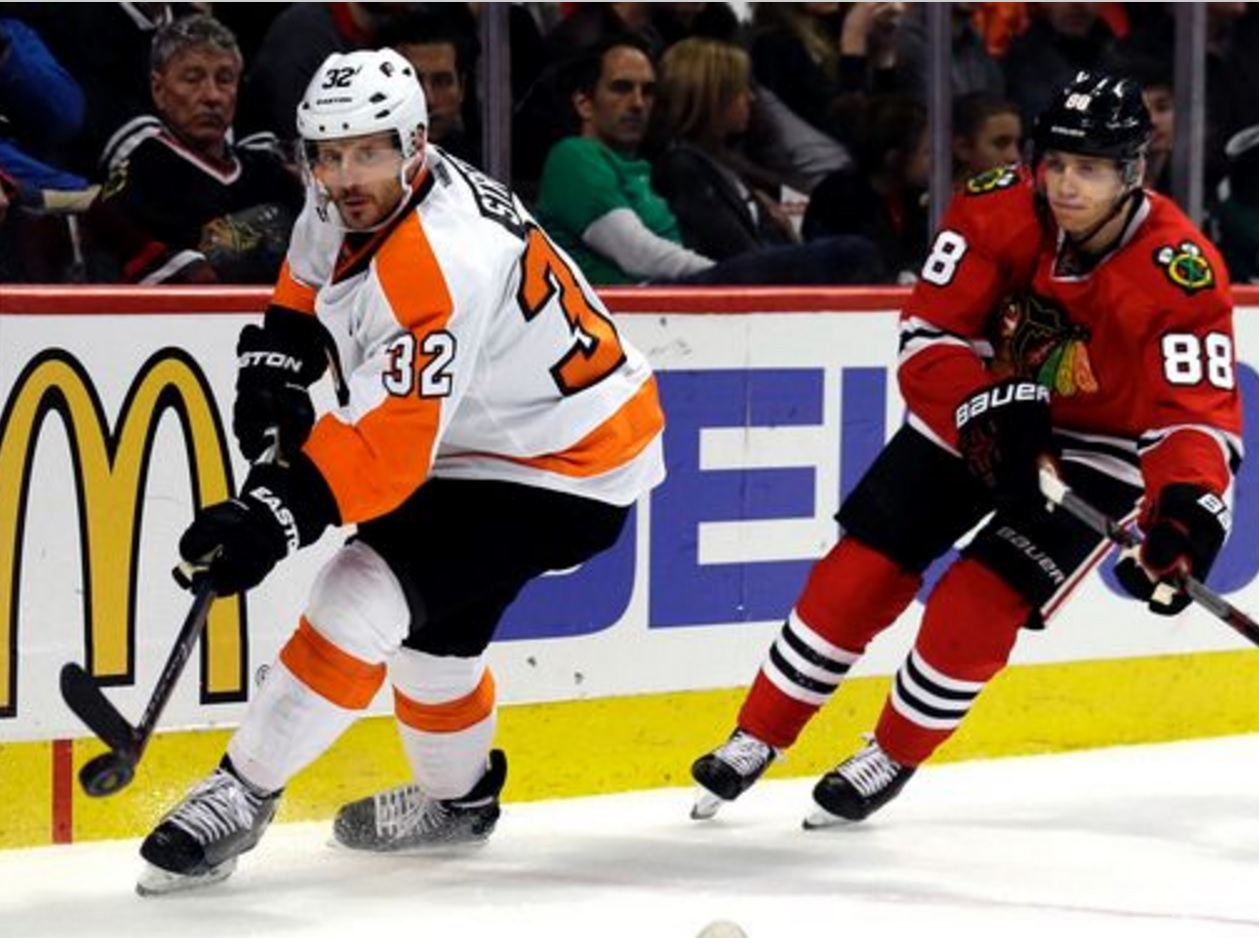 Another prime time game against a potential playoff team ended with the Blackhawks on the losing end.

Coach Joel Quenneville threw the lines in a blender before the game even started this time, rolling an entirely new look. Tomas Fleischmann got bumped up to a top line with Jonathan Toews and Patrick Kane, while Marian Hossa skated with Artemi Panarin and Artem Anisimov.

The first period saw both teams spending time short-handed, and the Blackhawks were able to take advantage first – but with a short-handed goal. Hossa got a breakaway when Shane Gostisbehere’s stick broke and he and beat Michal Neuvirth for his 497th career goal.

But the Hawks squandered 1:53 of 5-on-3 and the Flyers, predictably, were able to grab momentum from a big penalty kill. Ryan White was credited with his ninth goal of the season while Philly was on the power play to tie the game as Chicago’s penalty kill struggles continued.

Late in the first, Chris VandeVelde dangerously elbowed Toews in the head but was only called for a minor penalty (it could/should have been a major). Chicago couldn’t get a goal in 30 seconds of advantage to close the first period and didn’t get anything going in 90 seconds of power play time to open the second period.

Toews stayed in the game and early in the second, he finished a terrific shift from his new line. Toews roofed a shot past Neuvirth for his 25th of the year to give the Hawks a 2-1 lead. On the play, Kane got back on the scoresheet with an assist, his 90th point of the year. He became only the second American player to reach 90 points since 2001.

Unfortunately, that would be the end of the night’s offense for the Blackhawks.

Brayden Schenn scored his 24th of the year at 13:02 into the second to tie the game. In the third, Radko Gudas put a low shot towards the net and it redirected off Christian Ehrhoff’s stick and past Scott Darling for the game-winner.

Chicago pulled Darling late but weren’t able to get another puck past Neuvirth and dropped their fourth straight game.

Other than two goals, the night was ugly across the board for the Hawks. Toews won only six of 17 faceoffs and Teuvo Teravainen won just two of 11 at the dot as the Blackhawks’ struggles at the dot continued. Only Anisimov, who won seven of 13, was over 50 percent at the dot.

Hossa and Andrew Shaw, who skated with Teravainen and Andrew Ladd, led the team with four shots on goal each. Duncan Keith generated only one shot on goal in 24:42, the high ice time mark for the team. Only two other Blackhawks skated more than 22 minutes in the game: Michal Rozsival and Trevor van Riemsdyk. Ehrhoff skated only 10:25 but was credited with two blocked shots and two hits. It was Rozsival and van Riemsdyk who were on the ice for the final minute rush for a tying goal.

The Flyers are not 8-1-1 in their last 10 games and sit in the final playoff spot in the Eastern Conference. The Hawks, meanwhile, will try to get back on track when Ladd returns to Winnipeg on Friday night for a Central Division showdown.