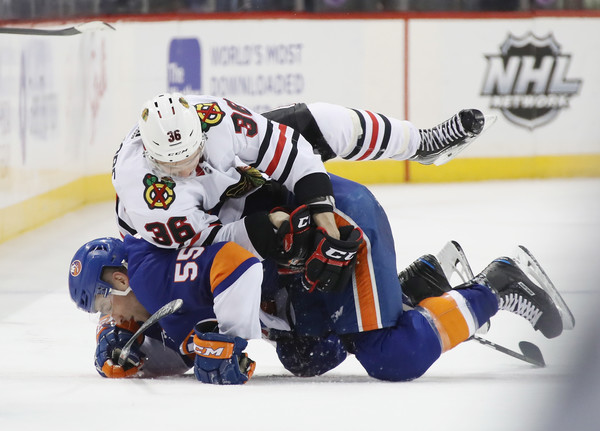 The Blackhawks and Islanders came into Saturday night’s game having each won two of their last ten.

You can feel the excitment, can’t you?

The opening 20 minutes played out as well as one could have hoped. The Isles out-shot the Hawks 10-9 and neither side scored.

Less than two minutes later, Brandon Saad scored his 17th of the season to extend the lead to two.

Jan Rutta and Jordan Oesterle were credited with the assists.

Chicago out-shot the Isles 10-8 in the second and carried a two-goal lead into the third.

Of course, nothing feels like a comfortable lead this year for Chicago.

But it took 17 minutes for John Tavares to get New York on the board. Anton Forsberg actually looked good between the pipes until the Tavares shot, and suddenly there was an uneasy feeling on the Blackhawks’ bench.

But Brent Seabrook continued his hot late season streak and scored his sixth of the season into an empty net to put the final nail in the coffin.

The Islanders put 32 shots on goal but Forsberg stopped 31 to earn the victory.

With Jonathan Toews still out because of an upper-body injury, the Hawks centers played a big role on Saturday. Artem Anisimov won eight of 11 faceoffs and David Kampf won seven of nine. Patrick Kane won only two of 11 and Nick Schmaltz also struggled, winning just two of 11 himself.

Saad and Rutta led Chicago with four shots on net each. Seabrook was credited with a team-leading three blocked shots.