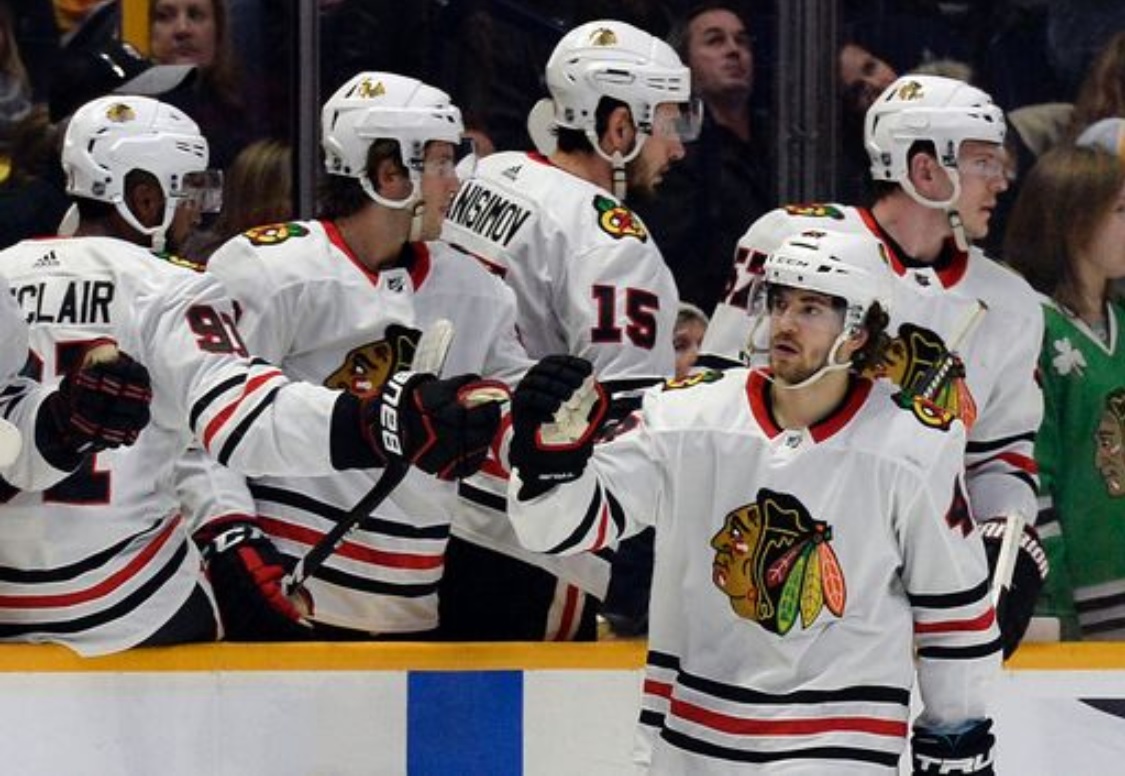 What, are you telling me Anton Forsberg against Juuse Saros isn’t as sexy as Corey Crawford vs Pekka Rinne?

The fans in Nashville were stuck with the Forsberg-Saros matchup but were treated to some terrific hockey. In the opening 20 minutes there were 17 total shots put on net, nine by the visiting Blackhawks. And one of those Chicago shots got past Saros.

David Kampf’s second of the year came with assists to Vinnie Hinostroza and Tomas Jurco. There were no penalties called in the first period.

The second period saw Forsberg make an ugly, ugly turnover that turned into a tying Kyle Turris goal at 2:12 and then the lack of penalties ended.

Austin Watson – not to be confused with the more likeable Randy Watson of the band Sexual Chocolate – took a shot at Ryan Hartman and Tommy Wingels answered the bell. Watson and Wingles picked up five for fighting and Watson got an extra two minutes for interfering with Hartman.

Chicago didn’t do anything with their first power play of the night (surprised?) but they got the lead back at 14:33 when Hinostroza put home his fifth of the year.

Nick Schmaltz and Patrick Kane were credited with assists on the missile from Hinostroza.

The Hawks got a second power play in the second period with Kevin Fiala in the box but, shockingly, did nothing with that advantage.

After 40 minutes, the shots were 22-21 Chicago and the Blackhawks held a one goal lead.

The third period saw the action fly both ways for 12 minutes without any scoring before Hartman got caught for interference with 8:09 left in regulation. Chicago went to their first penalty kill of the night. They were successful in killing the two minutes with Forsberg making a few more big saves. After his debacle of a turnover in the second period, Forsberg was locked-in and on point.

The final seconds ticked off, however, and the Blackhawks held on for a big division victory.

Even though Nashville came into the game 12 points in front of Chicago in the standings, Tuesday night lived up to a playoff atmosphere and intensity from both sides.

Forsberg did the heavy lifting in the third period, where he stopped 22 Predators shots to cling to the one goal margin of victory. He finished the night with 42 saves against 43 shots and earned every bit of two points for the Blackhawks in a much-needed road game coming out of the break.

The most noticeable skater for Chicago was Hinostroza, whose speed was a difference maker all over the ice. He had two points, three shots on goal and one hit in 14:33 on the ice.

Jonathan Toews won 13 of 23 faceoffs for Chicago; Artem Anisimov won one of ten. Alex DeBrincat, skating on a line with Toews and Anthony Duclair, led the Hawks with four shots on goal.

65 thoughts on “Forsberg, Hawks Hang On In Nashville”