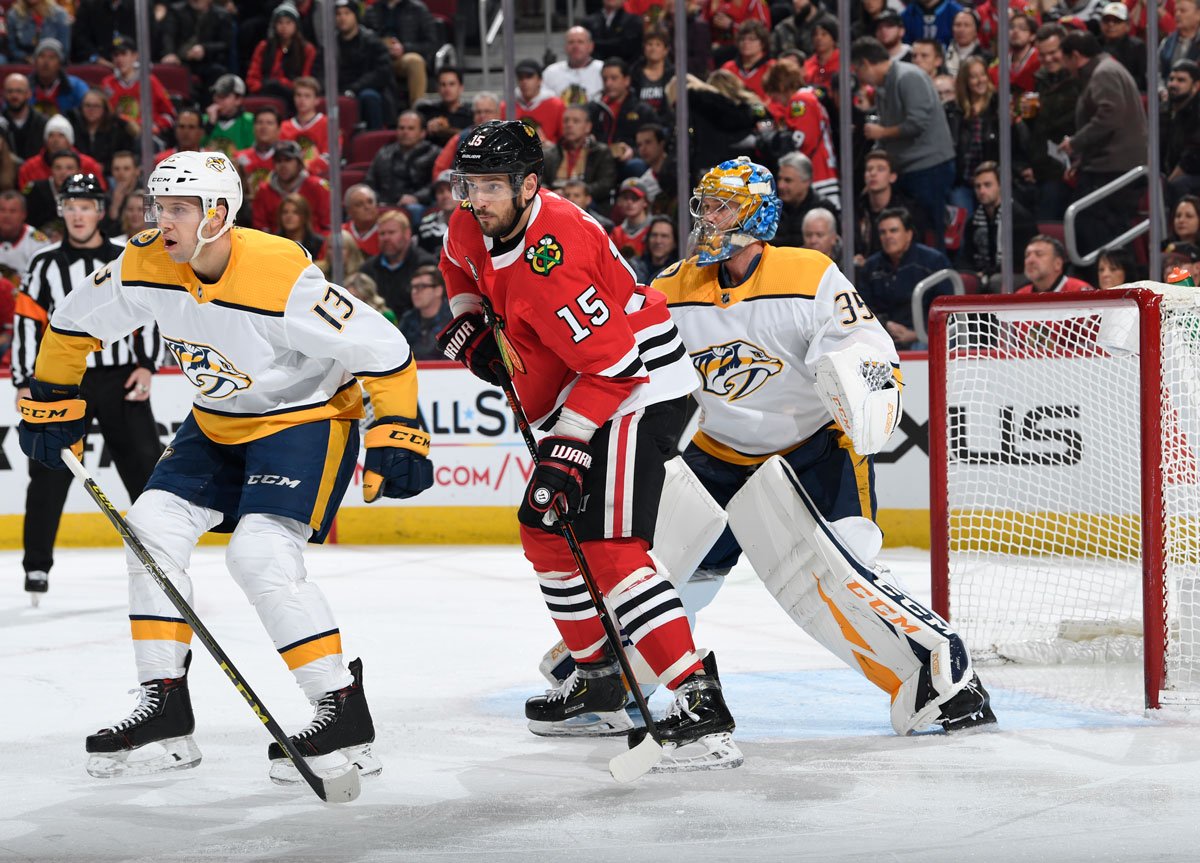 A Chicago team needed special teams for their best chance to win a game.

On Wednesday night at the United Center the Blackhawks hosted the Nashville Predators, who got Filip Forsberg back after a lengthy injury and are closing on Winnipeg for the division lead.

Colton Sissons got the Preds on the board at 6:49 with his ninth of the season. Nashville held onto that lead for ten minutes before things took a few crazy turns.

Our first nightly reminder that Patrick Kane is one of the all-time special talents in the NHL came with Chicago on the power play at 17:51 when he set up Alex DeBrincat for the tying goal.

That pass was amazing and looked easy.

The pass made by PK Subban immediately off the following faceoff to set up Viktor Arvidsson was easy, and the Blackhawks kept the game tied for a total of eight seconds.

Brendan Perlini caught Dan Hamhuis in the face with a high stick 15 seconds after the Arvidsson goal and Nashville was awarded a double-minor that would run over into the second period. Chicago successfully killed the 1:47 of short-handed time to finish the first period without allowing a goal and went to the dressing room chasing one.

Nashville held a 17-13 shot advantage after one.

The Hawks were able to kill off the rest of the Perlini penalty to open the second period but couldn’t escape Forsberg. He extended the Preds lead to 3-1 at 16:26.

Chicago further complicated things when David Kampf went to the box with 36 seconds left in the second period.

Thankfully Jonathan Toews didn’t want the second to end with the Hawks down more than one.

Toews’ short-handed goal, his 18th of the season, came off a pretty pass from Marcus Kruger.

The shots were 11 for each side in the second period and Chicago trailed by one heading to the third.

Over the course of the first 17 minutes of the third period both sides had good looks at the net but couldn’t score. Both Pekka Rinne and Collin Delia were sharp while passing left a lot to be desired from both sides.

At 17:39 Artem Anisimov scored his eighth of the season off a pass from Kane to tie the game.

With Anisimov’s goal holding up over the final 2:21 the game headed to overtime, once again thanks to terrific work from Delia. Chicago’s netminder faced 36 shots in regulation, allowing only the three goals.

The Preds got the puck to start overtime and the Hawks never had a chance. Forsberg, in his second game back from injury, beat Toews up the wall and flipped a puck past Delia on the short side to win the game exactly one minute into the extra session.

On the blue line, Brent Seabrook was a scratch because of illness but Henri Jokiharju returned from his WJC run. Jeremy Colliton relied heavily on Erik Gustafsson (24:04) and Duncan Keith (26:08), the only defensemen to skate more than 18:05. Carl Dahlstrom came up third in ice time. Brandon Davidson and Keith blocked a team-high five shots each on the night. After skating heavy minutes for his home country, Jokiharju was on the ice for 16:45 on Wednesday. Gustafsson put five shots on net.

John Hayden returned to the lineup in place of Chris Kunitz and was credited with a team-leading five hits in only 6:01 on the ice. Perlini skated only 7:31 and spent another four minutes in the penalty box.

Kane was credited with two assists and DeBrincat led Chicago with seven shots on net.