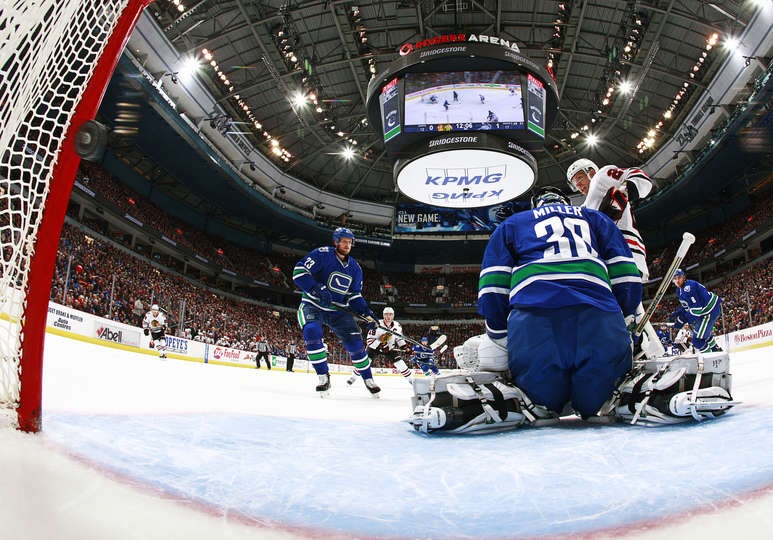 On the second night of a back-to-back, the Blackhawks weren’t able to keep up with the Canucks. Corey Crawford kept them in the game until late, but the Hawks fell 4-1 in Vancouver.

Jannik Hansen’s empty net goal with 42 seconds left in regulation completed a hat trick for the Vancouver forward. Hansen now has five goals in 21 games this season, but those five have come in his last three games.

Crawford allowed three of Vancouver’s goals – two to Hansen and one to Radim Vrbata – in his eleventh consecutive start. Chicago’s netminder made 26 saves against 29 shots in the loss, but made a number of fantastic saves in the first and second periods to keep the game close.

Kris Versteeg scored the only goal for the Hawks on the night, redirecting a Duncan Keith shot past Ryan Miller for a power play marker to tie the game in the second period. Miller made 24 saves in the victory. Joakim Nordstrom led the Hawks in hits for the second time in as many night; he was credited with four in Vancouver on Sunday night. Keith led the Hawks with four blocked shots and added an assist on Versteeg’s goal. Brent Seabrook had the other assist for the Hawks.

Sunday night was an uncharacteristically mediocre evening for Chicago’s captain. He was minus-four in the game and won only eight of 21 faceoffs.

Rookie Phillip Danault, skating in his second NHL game, won only two of 11 faceoffs in the game. His ice time was cut back as well; coach Joel Quenneville sent him out for only four brief shifts in the second period and only three shifts in the third, one of which came to close out the contest.

The other recent call-up, defenseman Adam Clendening, didn’t have a great night either. Hansen cut in front of him and redirected a puck past Crawford for the eventual game-winning goal early in the third period, and that stapled Clendening to the bench at even strength for the rest of the night. Quenneville only sent the young defenseman back out for a power play shift and with Crawford pulled late in the final frame.

Chicago was without Andrew Shaw again on Sunday, and Antti Raanta was the backup again as he deals with an illness. Daniel Carcillo is expecting an addition to his family in the not-too-distant future, and will leave the team to be at home for the birth whenever that happens. Jeremy Morin may get out of the press box at that point.

The Hawks are off until a date in Denver on Wednesday night.