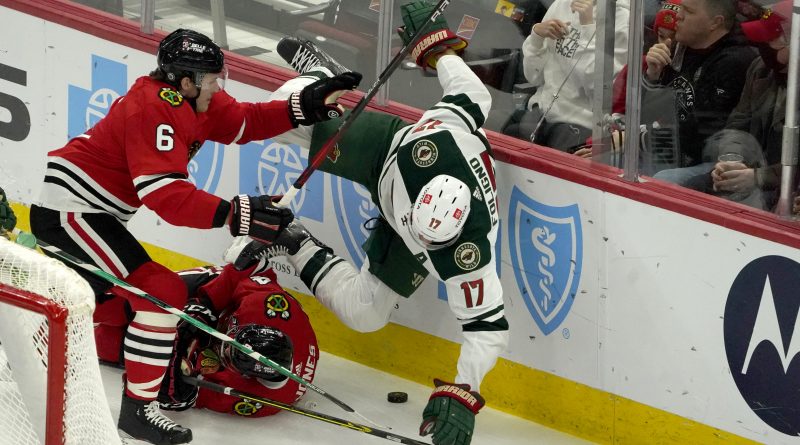 What do you want us to say at this point?

On Monday night, the Blackhawks lost a 3-2 shootout decision in Seattle against a terrible Kraken team. That loss ended a four-game win streak. Chicago then had three days off before hosting a Minnesota team that sits ahead of them in the standings.

During those off days, the Blackhawks got almost a complete roster back on the ice. Seth Jones, Kirby Dach and Dylan Strome exited COVID protocol and joined the team on the ice. Head coach Derek King said the Hawks were tired in the third period in Seattle; there shouldn’t have been any excuse for a less-than-stellar performance on Friday night.

Friday night’s game was the first between the Blackhawks and Wild in almost two full calendar years; they last played on Feb. 4, 2020. But they wouldn’t wait two more years to see each other again… these two teams will go at it again on Saturday night in the Wild’s barn.

So how did the Blackhawks look with a healthy roster and three days to get ready?

Marcus Foligno tripped Seth Jones less than 30 seconds into the game and the Blackhawks got a power play. They did nothing, and the Wild scored almost immediately following the end of the advantage. Foligno scored the goal, because of course.

Hartman scored his second of the period and 18th of the season with just under three minutes left in the first period to make the score 3-0 in favor of Minnesota.

The Blackhawks out-shot the Wild 12-10 in the first period, but trailed were chasing three.

At 12:42 into the second after another big hit on Jones, Riley Stillman dropped the gloves with Brandon Duhaime. Stillman handled his business fairly well. As that fight was ending, MacKenzie Entwistle dropped his gloves with Connor Dewar. That fight didn’t do much for anyone other than stir some 1980s nostalgia. Both Entwistle and Dewar got the showers and the rest of the night off for being involved in a second scrap.

So anyways, the Hawks were getting their asses kicked and were now down to 17 skaters in front of Marc-André Fleury.

Fleury was between the pipes for 12 more minutes before Calen Addison added a fourth goal for the Wild. King made the change and brought in Kevin Lankinen to finish up the game with the Blackhawks down four.

Lankinen was beat by Duhaime less than five minutes later and the Blackhawks were down five.

The crazy thing is, the Blackhawks actually generated more shots on net in the second period. Chicago out-shot Minnesota 15-9 in the middle period but the Blackhawks were on their second goaltender and were looking up at a five-goal mountain to climb in the third.

Stillman went into the boards hard during the second period and the team announced he wouldn’t return for the third period because of a shoulder injury.

The Hawks’ best line of the night was Dylan Strome between Brandon Hagel and Patrick Kane, and they were able to end the shutout big with five minutes left in regulation. Strome scored his fourth of the year.

The game finally ended with the Blackhawks holding a nice advantage in the shots on goal column but with a four-goal loss in the books.

Fleury stopped nine of 13 in 31:33. Lankinen was slightly better, but the game was out of reach by the time he came in. He stopped 16 of 17 in relief.

Strome had a terrific night. He skated 20:01 and finished tied with Kane for the team lead with four shots on net. He also won nine of 16 faceoffs; he had won two-thirds of his faceoffs in his previous five games, so the improvement at the dot is starting to show dividends.

On his 21st birthday, Dach skated 16:53 returning from COVID. He won half of his six faceoffs and was credited with three shots on net, two hits and two takeaways.

Stillman skated only 6:50 and we’ll have to wait and see if the shoulder issue keeps him out longer than just Saturday night; we’re assuming the Hawks will need someone else to fill that spot if he wasn’t able to return on Friday.