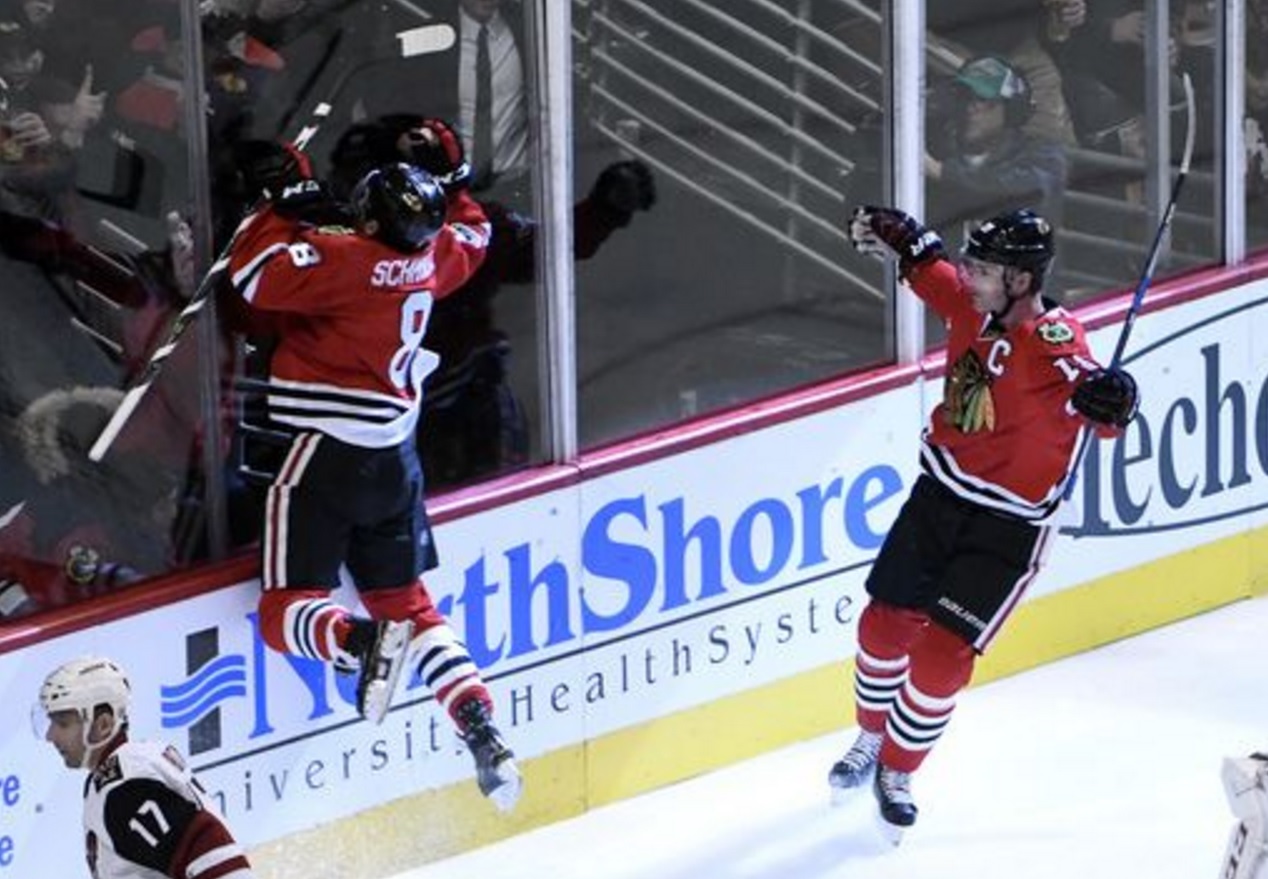 The Blackhawks came into Thursday night’s action celebrating Nick Schmaltz’s 21st birthday and on one of their better rolls of the season. But with Niklas Hjalmarsson missing the morning skate, coach Joel Quenneville decided to skate seven defensemen against the Arizona Coyotes at the United Center.

With Michal Rozsival back in action, the Hawks wasted no time getting into the offensive flow. Only 37 seconds into the game, the birthday boy celebrated with his sixth goal of the season.

Chicago’s top line continues to be on fire, as Jonathan Toews and Richard Panik picked up the assists on Schmaltz’s goal. Schmaltz is the first Blackhawks player to score a goal on his birthday since Patrick Sharp scored on his birthday in 2014.

The Hawks didn’t give up a quick goal immediately following the Schmaltz tally, but Arizona did get the next goal. Jakob Chychrun tied the game seven minutes after the Schmaltz score.

For the rest of the period, as much as the Hawks wanted to pull away, the Coyotes just kept hanging around.

Ryan Hartman gave the Blackhawks a 2-1 lead three minutes after the Chychrun goal.

Hartman became the seventh Blackhawks player to reach 15 goals on the season, and the rookie is now tied with Toews in that statistic. He

Hartman stayed involved in the offense, picking up an assist on Patrick Kane’s 21st of the season six minutes later.

Apparently Hjalmarsson wasn’t feeling well, because his fifth and final shift came with 8:22 remaining in the first period; he skated 3:02 in the opening 20 minutes. With under three minutes left in the period, Rozsival got absolutely undressed by Ryan White. White shot the puck off the boards behind the Hawks’ net, skated around Rozsival, and beat Crawford to draw the Coyotes to within one.

Radim Vrbata, one of the hot names in trade rumors ahead of next week’s deadline, tied the game 57 seconds later because nothing can ever be easy against Arizona.

Brian Campbell took a delay of game penalty with 58 seconds left in the period, but the Hawks were able to kill off the first half of the penalty to close out an ugly first period for defense on both ends of the ice. Corey Crawford allowed three goals against 10 shots while Mike Smith allowed three against 13 shots. And with Hjalmarsson missing, the Hawks were down to 11 forwards for the rest of the night.

The second period started with the Hawks finishing the Campbell penalty, and then the offense went to work in similar fashion to the first. Chicago’s top line took control and just under three minutes into the second Schmaltz set up Rozsival and the ancient warrior scored his first goal of the year to give Chicago a 4-3 lead.

Toews picked up the second assist with Schmaltz on the Rozsival goal, giving both players another multi-point effort.

Campbell went back to the box but this time the Hawks attacked. Marian Hossa carried the puck and Alexander Burmistrov into the zone and eliminated the second half of the Campbell minor as Burmistrov was called for hooking. Neither team scored on their advantage, however.

Twelve minutes into the second, Kane jumped over the boards and caught a lead pass at center ice. He settled a bouncing puck down and patiently waited for Tanner Kero to join him, only to rifle a shot through Smith’s legs. For the second time in the game, Kane gave the Blackhawks a two-goal lead.

With 1:46 left in the second, Panik got his money’s worth at the expense of Martin Hanzal’s face. Once the ice crew was done cleaning up the blood, Panik sat down for four minutes. The Hawks killed off the 106 seconds to close the second period.

Arizona out-shot Chicago 16-9 in the second period, but Crawford kept the visitors off the board while his skaters re-established a two-goal lead heading to the second break. Through 40 minutes, Toews and Kero had both won six of nine faceoffs while Dennis Rasmussen had won six of eight.

Chicago opened the third period successfully killing the rest of the Panik double-minor. It wasn’t a great night for Panik, who also took a terrible intentional offsides later in the third period.

Almost 10 minutes into the third, Kane finished off the hat trick.

Artemi Panarin and Artem Anisimov assisted on Kane’s third goal, the first of the three that either was credited with a point. Kane is up to 23 goals on the season.

Brandan Perlini went to eh box with 6:54 left in regulation with the Coyotes not showing much fight after Kane’s third marker. Chicago put a couple attempts on net but didn’t get anything done in the two minute advantage. Indeed, Arizona didn’t do much of anything after Kane extended the lead to three, and the game easily ended with a 6-3 final favoring the home squad.

After a rough first period, Crawford finished the night with 34 saves against 37 shots to earn a win.

Quenneville said Niklas Hjalmarsson has an upper-body injury. Not sure of the prognosis yet but seems to think Hjalmarsson will be OK.