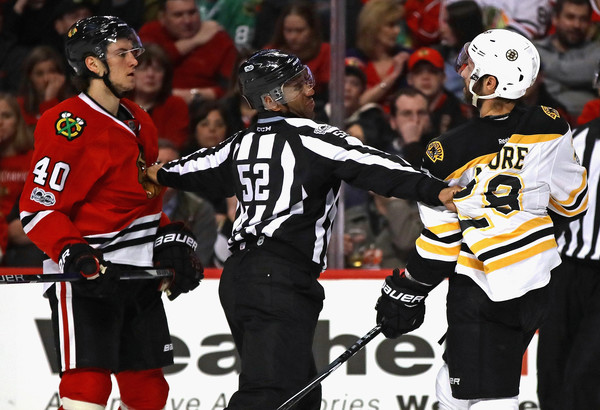 Without playing on Saturday, the Blackhawks clinched first place in the Central Division and the top seed in the Western Conference playoffs. With an 11:30 AM CST start on Sunday, the Hawks started like a team that was playing to stay healthy.

The Hawks out-shot the Bruins 16-11 in the first period but were down 2-0 after 20 minutes. Ryan Spooner started the scoring and then Patrice Bergeron extended the lead with a power play marker with 63 seconds left in the first.

Chicago was out-shot 12-11 in the second, but got on the board in a unique series of events.

Richard Panik did get an assist on Artemi Panarin’s 29th of the season; Brent Seabrook, who was featured by NBC throughout the broadcast, had the other helper. Panarin is getting dangerously close to hitting his bonuses again this season after a recent hot streak has him back among the league’s leaders.

Kevan Miller gave Boston another two-goal lead at 9:15 into the third after a Niklas Hjalmarsson clearing pass didn’t anywhere near its intended target. But this two-goal lead lasted only 25 seconds.

John Hayden and Seabrook were credited with assists on the Jordin Tootoo goal.

Neithe team was able to put another goal on the board and coach Joel Quenneville pulled Corey Crawford late for the extra attacker. The Hawks got a flury of chances with a few rebounds laying around the crease, but weren’t able to beat Anton Khudobin. When Boston finally cleared the zone, Chicago burned their timeout with 19.5 seconds left before the offensive zone faceoff thanks to the Bruins’ icing.

The Hawks weren’t able to get anything past Khudobin in the closing moments, and the Bruins escaped with their fifth consecutive win.

Khudobin was magnificent for Boston, stopping 41 of 43. Chicago out-shot Boston 16-6 in the third period but were only able to add one goal. Crawford stopped 26 of 29 in the loss.

Jonathan Toews won 18 of 30 at the dot against the always-tough Bruins; Bergeron won 21 of 31 for Boston. Toews also finished tied with Kane, Seabrook and Marian Hossa for the team lead with five shots on net. Hayden and Ryan Hartman led Chicago with four hits, while Niklas Hjalmarsson had a team-high four blocked shots.

Kane skated 22 minutes with two takeaways with his five shots on net after requiring some facial repairs before the game. He was hit in the face with a pick during warm-ups and needed some stitches above his lip.

Chicago finishes the season with road games in Colorado, Anaheim and Los Angeles. The Frozen Four is at the United Center on Thursday and Saturday this week.