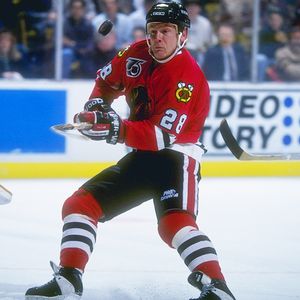 Won Calder Memorial Trophy and was named to All-Rookie Team in 1983.

From 1982-1993, Larmer played in 884 consecutive games with Chicago, an NHL record streak with one team.

Played in Stanley Cup Playoffs in each of his 13 seasons (11 with Chicago, two with New York Rangers).

Larmer should be in the Hall of Fame.