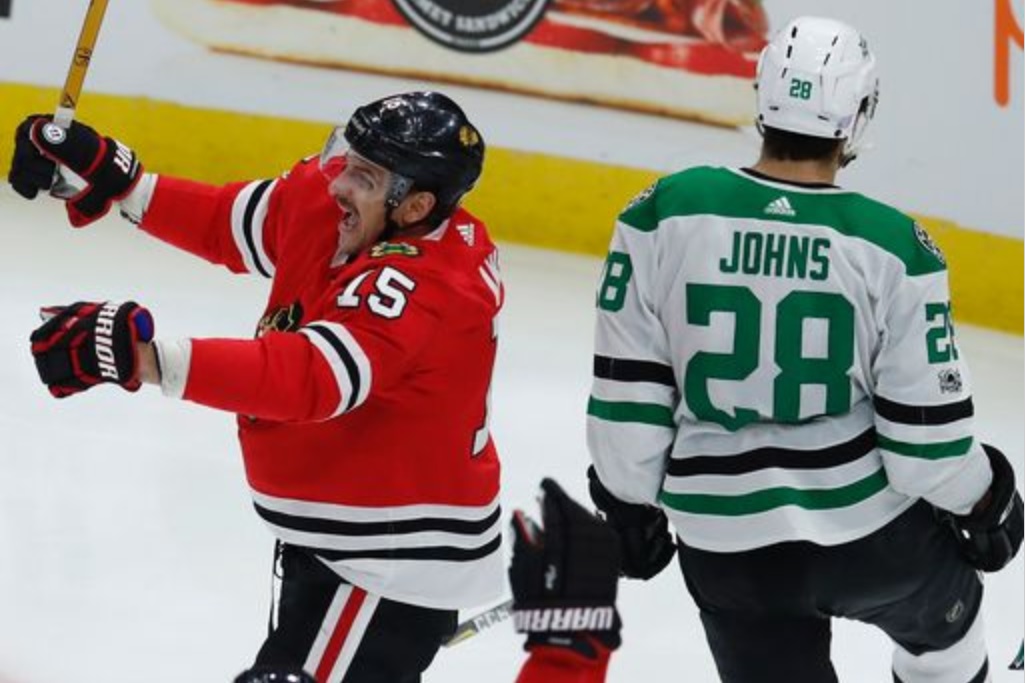 The Blackhawks and Stars will play twice – once in each city – over the span of three days. And Thursday night’s Round One was a good display of why the two teams were tied in the standings coming into play.

Chicago spent 6:44 on the power play in the first period but finished the 20 minutes trailing 2-1. At 14:46 Mattias Janmark opened the scoring with his fifth of the season.

Per @EliasSports: @Brinksy97 is the first rookie in @NHLBlackhawks history to score 10 goals in a calendar month. #NHLStats #DALvsCHI pic.twitter.com/Ukjvndd30s

Remi Elie went to the box at 16:41 but the worst of the Blackhawks’ first three power plays cost them. A turnover at the blue line sent Radek Faksa off to the races between Patrick Kane and Cody Franson. Kane was called for hooking, and Faksa converted the rare short-handed penalty shot opportunity to give Dallas the lead.

In spite of the Blackhawks spending so much time with an advantage, Dallas held a 15-7 shot advantage after the first.

Elie was back in the box for 1:16 to begin the second period and the Hawks were able to capitalize. Kane made a play that reminds you – again – of how special number 88 in red is, feeding Artem Anisimov for the tying marker.

Chicago would only put three shots on net in the second period and their inability to generate offense cost them again. Elie, who had a busy box score, gave the lead back to Dallas at 14:04. Dallas was credited with a whopping six shots in the second.

The Hawks came out firing to start the third period, matching their ten shot total from the first two periods in under ten minutes. And at 4:34 into the third, it was Kane making another big play.

Kane’s tenth of the season trails DeBrincat and Anisimov on the team leaderboard, but it tied the game at three.

Jonathan Toews went to the box for hooking at 6:43 but the Dallas advantage would be short lived. John Klingberg went to the box for four minutes after he caught John Hayden in the face with a high stick 47 seconds later, leaving the Chicago forward bleeding.

But, again, the Hawks did nothing with an extended power play.

Neither team would score the rest of the way in the third period, and we headed to overtime.

Free hockey started out ugly for the Hawks. After a partial change, Kane and Brandon Saad collided at center ice and Janmark blew past Keith and beat Corey Crawford to win the game for Dallas.

Crawford had a good night, allowing four goals against 35 shots. Ben Bishop only needed to make 19 saves to earn the victory.

Ryan Hartman was credited with an assist on DeBrincat’s goal but skated only 7:43 in the game. He was also credited with one hit and one blocked shot and won half of his six faceoffs.

Brent Seabrook skated only 14:08 and committed a brutal turnover that led to Dallas’ third goal. Connor Murphy was better, skating 15:53 with two blocked shots, two hits and the other assist on the DeBrincat goal in the first.

These two teams are back at it in Dallas on Saturday night.