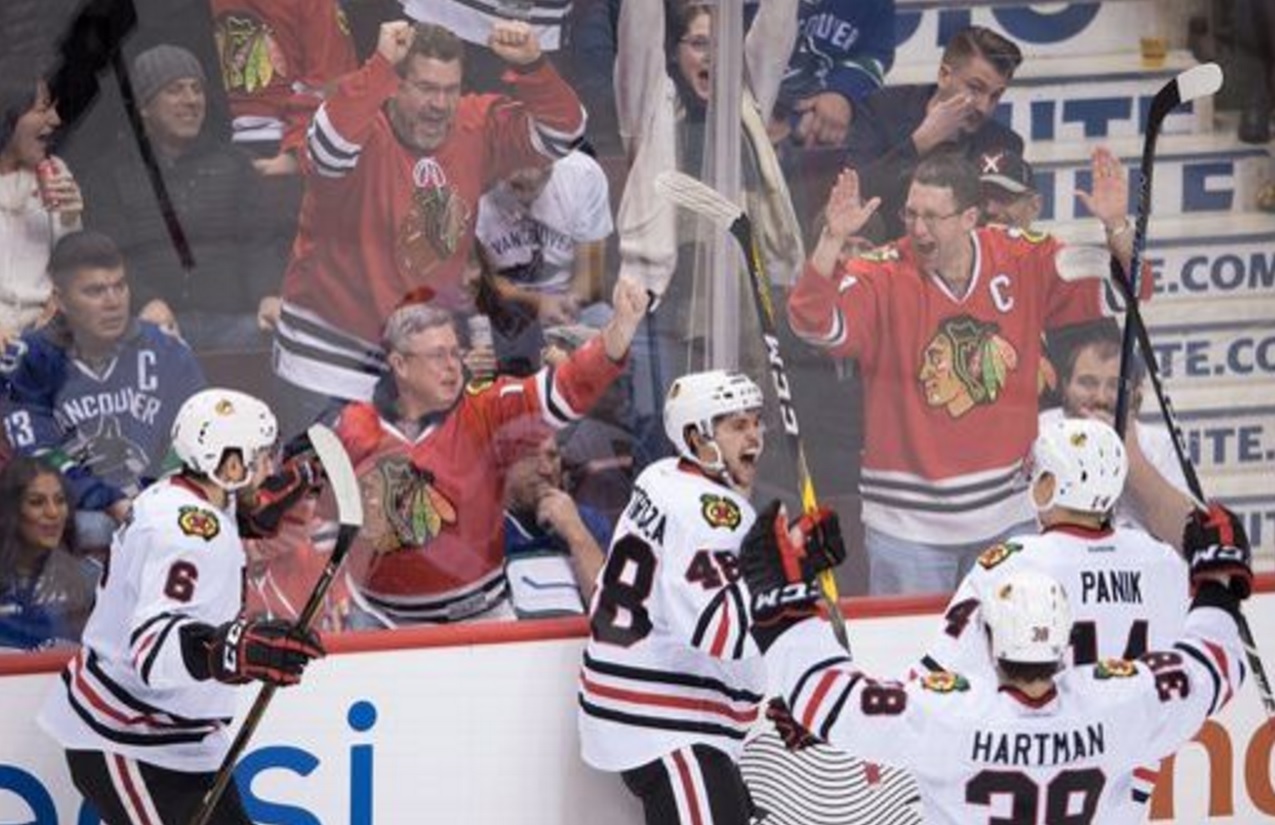 In closing his television interview before the third period, assistant coach Kevin Dineen said “you can expect us to shoot the puck a lot more.” That summarized the opening 40 minutes of hockey from the Hawks pretty well.

Coming off a hard fought win in Calgary on Friday night, the Blackhawks started an hour later on Saturday in Vancouver and looked like a team playing the second half of a back-to-back in the middle of a long road trip. However, the host Canucks came in 3-6-0 in November.

Coach Joel Quenneville did make three roster adjustments heading into the game. Rookie forwards Tyler Motte and Vinnie Hinostroza returned to the lineup in place of Jordin Tootoo and Andrew Desjardins, and Michal Rozsival took the place of rookie Gustav Forsling on the blue line. With Motte and Hinostroza back, Nick Schmaltz bumped back up to the top line’s left wing slot with Jonathan Toews and Patrick Kane. And with Crawford playing Friday night, Scott Darling was between the pipes in Vancouver.

Rozsival was the first roster change to get noticed when he headed to the penalty box 12:35 into the game. Loui Eriksson, who has struggled to start the season, took advantage. Eriksson’s third goal of the season gave Vancouver a lead they held through the end of the first period. In the opening 20 minutes, Vancouver out-shot Chicago 10-7 and many of the Blackhawks appeared to be trigger shy.

If the first period was a struggle, the second was frustrating.

On a few occasions, Schmaltz simply refused to shoot the puck even though he had what appeared to be the best angle to get the puck on net. The Hawks only put four shots on net as a team in the second period, a number that doesn’t include Jonathan Toews getting post with a breakaway.

Vancouver scored twice in the second to extend their lead to 3-0. Bo Horvat scored a short-handed goal at 17:03 and Brandon Sutter scored 1:24 later. The Canucks were out-skating and out-shooting the Blackhawks through 40 minutes.

But clearly the message Dineen conveyed to the broadcast team was understood coming out of the dressing room. The Blackhawks attacked hard right out of the gate in the third period and got a power play 47 seconds into the final frame as Daniel Sedin took a seat.

The Hawks didn’t score on the power play, but Kane set up Artemi Panarin who unloaded a missile that beat Jakob Markstrom six seconds after Daniel Sedin left the box.

Only 73 seconds later, Hinostroza made his presence felt. He followed his own shot, collected a rebound and put home his first career NHL goal to cut the lead to 3-2.

After putting 11 shots on goal in the opening 40 minutes, the Hawks put nine on net in the first 10 minutes of the third period.

Vancouver forward Jayson Megna was in the middle of a lot of the penalty action. He was on the receiving end of the Blackhawks’ penalties in the first and second period, and then went to the box himself 12:54 into the third period.

After Megna left the box following a successful penalty kill by his teammates, he had a chance to get a shot away but a terrific defensive play by Schmaltz broke it up. Schmaltz stuck on the top line with Toews and Kane the entire night, a departure from Quenneville playing roulette with that spot during games all season.

Quickly after Schmaltz broke up the Megna rush, the Hawks’ “fourth” line came on the ice and made an immediate impact. Richard Panik leveled a defenseman at the blue line and got the puck to Hinostroza. Hinostroza showed tremendous patience in slowing down and waiting for the trailing Ryan Hartman, who received a perfect pass and unloaded a shot that tied the game.

Both sides had a couple good chances in the final five minutes of regulation but neither team was able to capitalize and a frenetic third period that saw the Blackhawks score three times on 17 shots give way to overtime. More importantly, the Hawks held Vancouver to three shots in the third as Chicago completely flipped the script from the opening 40 minutes.

Only 31 seconds into overtime, Toews put a shot through the legs of both Daniel Sedin and Markstrom that appeared to end the game. But the play was reviewed and Niklas Hjalmarsson was ruled to be offside and the would-be game-winning goal was erased.

With the game continuing, both goaltenders made enormous saves. Darling was absolutely amazing against the two Sedins and then against an Eriksson breakaway chance.

For three minutes, the action was ridiculous up and down the ice. But there was no way the Hawks were going to come all the way back and leave the result to a shootout.

Marian Hossa unloaded with 56 seconds left in overtime and beat Markstrom to end the game – giving Hossa game-winning goals on back-to-back nights. Hinostroza added an assist on the game-winner, giving the rookie a three-point game.

The @NHLBlackhawks overcame a three-goal deficit in third period and won for first time since Nov. 24, 1995 at ANA (5-4 OT W). @EliasSports pic.twitter.com/d5lVTZfXIO

For all of the talk about whether or not the Blackhawks would be able to compete early in the season with so many rookies in the lineup, they have certainly started to be difference makers on a nightly basis. Saturday night may be a turning point for the Blackhawks young forwards.

Rookie defenseman Michal Kempny also picked up an assist and finished tied for the team lead with three hits.

Darling made 24 saves to earn the victory, five of which came in overtime. There is no way the Blackhawks come back and eventually win Saturday night’s game without Darling playing an incredibly strong game.