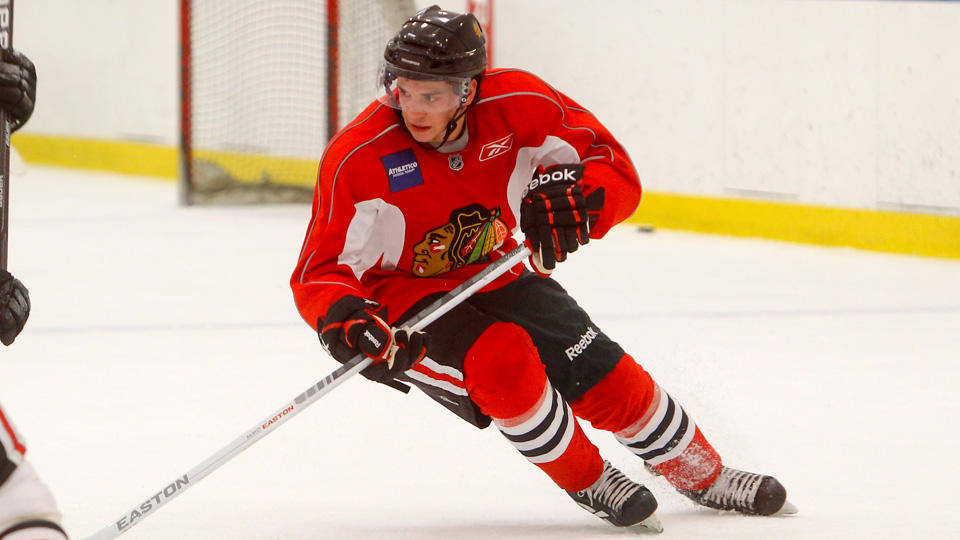 Last week, the Blackhawks hosted their annual prospect camp. There were a lot of interesting notes that came away from all three rosters at the camp. As a reminder, here are the three teams:

At the 2016 Blackhawks Convention over the weekend, both GM Stan Bowman and coach Joel Quenneville were asked to assess the week’s prospect camp. Both had predictably positive things to say, but five names were consistently mentioned by both: Tyler Motte, Nick Schmaltz, Vince Hinostroza, Ryan Hartman and Tanner Kero.

Of those five, three – Hartman, Hinostroza and Kero – appeared in NHL games last season. Motte (Michigan) and Schmaltz (North Dakota) were finishing their college careers; Motte appeared in limited AHL action with the IceHogs down the stretch, while Schmaltz didn’t sign until later in the summer.

All five will have a shot at making the NHL roster this fall, and Hinostroza was specifically identified by both Bowman and Quenneville has having had a strong week at camp.

One of the players who exploded onto the scene was forward Alex Fortin, who was on Team B. Fortin, 19, had 19 goals and 24 assists in 54 games with Rouyn-Noranda in the QMJHL last season. He got everyone’s attention last week, scoring five goals in three scrimmages. Fortin’s performance earned him a note in the Sun-Times and a nice feature by Scott Powers at The Athletic, who noted the potential for an entry-level contract for Fortin after being passed in two NHL Drafts.

While he wasn’t invited to the prospect camp, Mark McNeill received a one-year, two-way contract from the Blackhawks on Friday. McNeill, 23, scored 25 goals in 64 games with Rockford last year.

Two of the Hawks’ picks from the 2013 NHL Draft are headed back to college for a senior year. John Hayden will return to Yale and Anthony Louis will go back for another season at Miami (OH).

Defenseman Michal Kempny was invited to prospect camp, and met with the media.