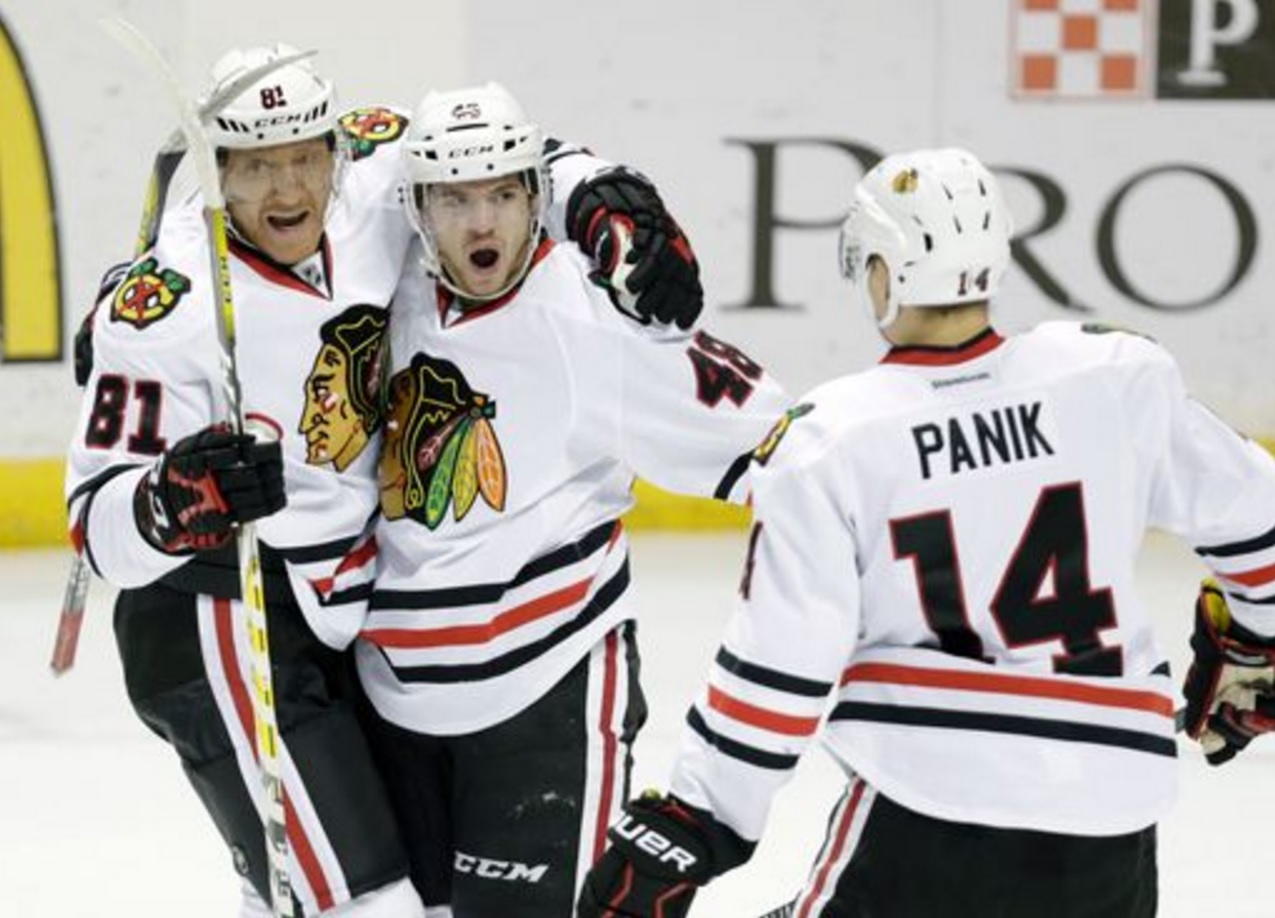 For the second straight game, the Blackhawks had to put on an offensive display to earn two points. This time, the high scoring affair was against a hated division rival in St. Louis.

In Brooklyn, the first period saw the Hawks and Islanders score six combined goals. On Saturday, the scoring erupted in the second period.

The first period saw almost 19 minutes of nothing. Patrik Berglund scored 41 seconds into the game to give the Blues a 1-0 lead. At 19:34, Dennis Rasmussen scored his third of the season to tie the game.

Chicago and St. Louis alternated goals in the second period and five total shots found the back of the net. Kyle Brodziak started the fun 3:12 into the middle stanza with his fourth of the season.

Patrick Kane hadn’t scored a goal since Nov. 26 at the Kings. He had six assists in eight games in November, but no goals. He erased that drought to tie the game at two 10:44 into the second.

Trevor van Riemsdyk made a nice play in the defensive end and found Kane for the breakaway, and 88 finished the job for his ninth of the season.

Four minutes later, Berglund scored his second of the night and fourth of the season to give the Blues another lead, this time a 3-2 advantage. But the scoring wasn’t done there. Brian Campbell netted his third of the year to tie the game at three.

Through two periods, the Blackhawks had actually out-shot the Blues 25-20 but Joel Edmundson had three assists and the Blues were leading.

Exactly 60 seconds into the third period, Niklas Hjalmarsson tied the game and equaled a career best.

The goal was Hjalmarsson’s fourth of the year, tying his career high in only his 32nd game of the season. Artemi Panarin was given his second assist of the night on Hjalmarsson’s tying goal.

Chicago got a power play seven minutes into the third but failed to capitalize. After Ryan Hartman and Ryan Reaves served matching roughing minors, a tenacious Vinnie Hinostroza scored second of the year to give the Blackhawks their first lead of the night.

Panarin would add an empty net goal in the final minute to cap the scoring at 6-4 in favor of the visiting Blackhawks. The goal is Panarin’s 14th of the season and gave him a three-point night to lead Chicago.

Kane (two assists) and Panarin had multi-point nights, but did it mostly without Artem Anisimov. The Blackhawks usual second line center only took six shifts, and after the game coach Joel Quenneville indicated Anisimov is day-to-day with an upper-body injury.

Marcus Kruger saw more action with Anisimov out of the lineup. He picked up two assists in 16:01 and won eight of 20 faceoffs; Jonathan Toews won 13 of 25 as Quenneville relied almost exclusively on his two veteran centers in a big road divisional contest.

Hjalmarsson led the Blackhawks with four blocked shots while Brent Seabrook and van Riemsdyk were credited with three blocks each. Gustav Forsling returned to the lineup and played his best game in some time, skating 14:06 in the victory.

Richard Panik was the only Hawks skater to be credited with more than one hit; he had three in the game. Ryan Hartman continued his strong play of late, leading the Hawks with two takeaways.

Darling finished the night with 23 saves against 27 shots.

Tyler Motte was a scratch on Saturday night but might return to the lineup when the Hawks return home on Sunday night to face the Sharks. The Hawks might need him if Anisimov can’t go.